The truth about e-cigarettes you don't want to hear

Are they really THAT bad for you? 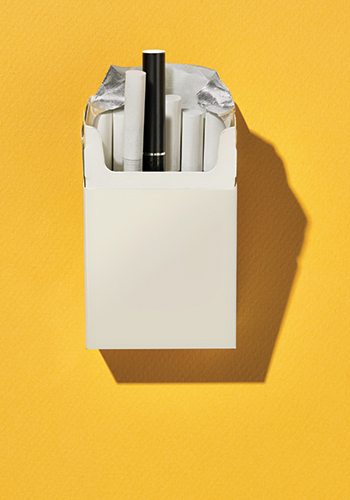 It may be time to kick that e-cigarette habit. A new study published in the American Chemical Society’s Chemical Research in Toxicology suggests that the type of nicotine most often used in these devices is the “free-base” kind – aka the most addictive kind of nicotine because it’s absorbed into the body.

Even worse? More new research, this time out of the University of Southern California, has found that U.S. teens who try electronic cigarettes may be more likely to smoke the real thing than those who stayed away from the electronic versions.

E-cigarettes are often marketed as healthier alternatives to cigarettes because they don’t contain cancer and heart-disease-causing tobacco. Rather, the device heats a combination of liquids, flavouring and addictive nicotine into a vapour. (To be clear, not every e-cigarette contains nicotine; some are simply flavoured.)

And while they are a popular smoking-cessation device because they simulate the act of smoking without the tar, the jury is still out on whether or not these are actually an effective means of quitting. “To date there is not sufficient evidence that the potential benefits of e-cigarettes in helping Canadians to quit smoking outweigh the potential risks,” Health Canada said in a statement to ELLE Canada. “A company would have to provide evidence of safety, quality and effectiveness in order to have its product authorized.”

MUST-READ: 6 steps to getting a better sleep

By authorized, he means legal. In Canada, the sale of e-cigarettes with nicotine is barred. (Any nicotine products must be approved by Health Canada under the Food and Drugs Act. Health Canada has yet to make a decision on liquid nicotine.) But anyone who has popped by a corner store or vape shop knows they are ubiquitous and about as heavily policed as a pirated version of Game of Thrones. (Note: flavoured versions without nicotine are legal to sell.)

Rob Cunningham, senior policy analyst at the Canadian Cancer Society, explains that the government is currently reviewing how it will legislate these sales following the March 2015 report on e-cigarettes by the House of Commons Standing Committee on Health. But the deadline to respond was July 8 (when Parliament recessed for summer) and with a federal election on the horizon, a reply is no longer required.

In the interim, seven provinces are legislating e-cigarettes, including stopping the sale to minors and banning use in public places. The statement from Health Canada also notes that Canadians – “especially youth” – should not to use e-cigarettes containing nicotine until it has reviewed studies and literature.

READ MORE:
Is the square nail the shape of the summer?
Hair upgrades for every comfort level
How Miss Universe Japan is changing the world (for real)