Be the smarty pants of your squad with our weekly health roundup. 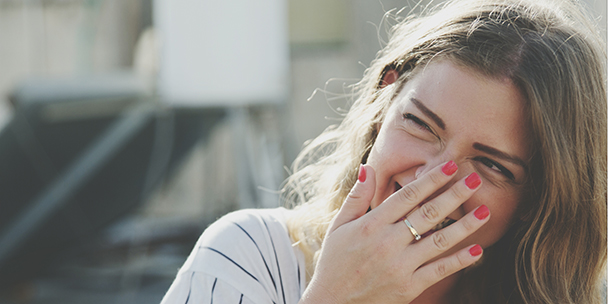 The giggle gene
If you have trouble keeping a straight face, you can blame (or thank!) your parents. Researchers at the University of California Berkeley and Northwestern University have discovered that a gene that helps to regulate serotonin (a neurotransmitter in the brain that influences moods) is linked to how likely you are to spontaneously smile and laugh. If you have the shorter version of the gene variant 5-HTTLPR (this can be tested through saliva) you are more likely to show off your smiley face.

Drinking (and hunger) games
There’s a scientific reason why waiters want you to linger over drinks while you read the menu – you may order more. Having an alcoholic beverage before your meal can make you feel hungrier, according to a study from the Indiana University School of Medicine. They found a boozy buzz can cause a part of the brain (the hypothalamus) to perk up when it smells food. The phenomenon has been oh-so-appropriately dubbed the “aperitif effect.”

Inspiring Angelina
Call it the Angie Effect. Angelina Jolie’s New York Times op-eds chronicling her genetic testing for breast and ovarian cancers has influenced women to follow in her footsteps. Thirty percent of people polled by researchers at North Carolina State University said they plan to get tested to see if they carry the BRCA1 gene, the same gene Jolie has, which is associated with higher risks of the two cancers. Another 23 per cent said they would “probably” get tested. “Women who identified more strongly with Jolie were more likely to intend to get the genetic testing regardless of whether they had a family history of cancer than women who did have a family history of cancer but did not identify with Jolie,” said Kami Kosenko, lead author of the paper.

MUST READ: Adventures in fake tanning

Yes, older siblings are usually smarter – but just barely
Feel free to manipulate this information in whatever way that suits you during your next spat with your siblings. A study of 377,000 high school students by the University of Illinois has gleaned that a family’s firstborn typically has a higher IQ than their younger siblings. However, the difference in intelligence is so minute, it has no bearing on the lives of family members. The study, which is published in the Journal of Research in Personality, also found that the eldest child tends to be more extroverted and experiences less anxiety than his or her siblings.

Go Canada!
We’re soooooo over smoking, but according to a new study, Americans aren’t. Casual smoking, which is defined as five or fewer cigarettes a day (a figure we don’t think is casual at all!), is on the rise in the United States, according to researchers at the University of Texas at Austin. They looked at a sample of almost 10,000 young women, who were asked if they had smoked even part of a cig in the past month. Of those who had, 62 percent considered themselves light smokers. Of the light smokers, 71 percent said they didn’t smoke every day. Happily, in Canada, we’re not experiencing the same trend. Casual smoking (either daily or occasional) among women is slowly declining – it dropped from 4.7 percent of the population in 2003 to 3.5 percent in 2014, according to data from the Canadian Community Health Survey.