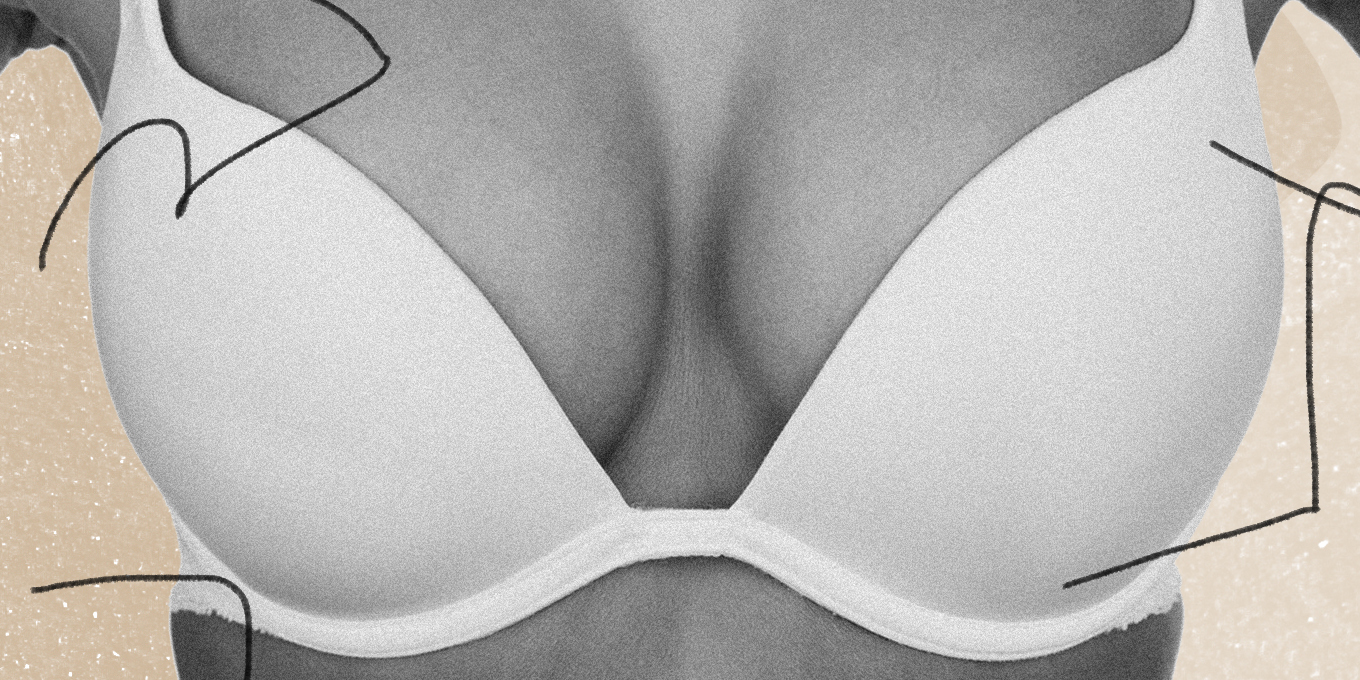 “I hate my breasts.”

By the time I was 16, those four words were on repeat in my head. It was the same at 20. And at 25. And 30. It didn’t matter what age I was; I hated them. My breasts weren’t just small—they were the underdeveloped boobs of a 12-year-old. Pointy. Flat. My cup size – if you could call it a cup – was an A. But it was really more like an A-minus. I once tried on a peekaboo bra embellished with feathers; I looked like a plucked chicken. What I didn’t look like was the ideal female form.

When I was a teen, my breasts were frequently commented on. “Raisin tits” and “grapes” were two favourites. If you’re thinking this came from insensitive boys bullying me in the school hallways, you’re wrong – it came from my sisters and my mother. All three of them had what Victorians would refer to as “ample bosoms.” My grandmother would sympathize and remind me that she was flat-chested until she had babies. “But I don’t want babies,” I recall responding. I just wanted breasts.

During sex, the negative feelings were amplified. I was incredibly self-conscious. (I know, who isn’t?) When it came to removing my bra, I was strictly a lights-off, under-the-sheets kinda girl. My breasts could be touched but not seen.

Every time I saw a woman with cleavage, I was jealous. I wanted to be her. Of course, the solution was a simple one: Implants, enhancement, augmentation – whichever term you choose, artificial intervention was the way to get the cup size of my dreams.

By the time I was 34, in 2001, I’d saved enough money for the procedure. I ended up in the office of Dr. Stephen Mulholland, at his SpaMedica clinic in Toronto. Dr. Mulholland explained in detail the surgery, the recovery and the results I could expect. Around this time, there was some controversy surrounding silicone implants, so I chose the safer option: saline. I was excited and terrified (this was surgery, after all), but I was desperate to see the me I’d always envisioned. I went for a C cup even though my height, weight and frame could have easily carried a D or more; I wanted a natural look, not a porn-star vibe.

It took several months for the implants to settle and for me to feel like they weren’t an invasive species. I have to admit, they looked great, felt soft and moved naturally compared to some that I’d heard horror stories about. My friends – one of whom is a former stripper – all agreed that I now had gorgeous tits. After years of wanting big breasts, I should have been ecstatic, but two things were immediately apparent and would become duelling voices in my head for the next 17 years.

First, the implants did the job. Taking my clothes off was no longer something to be dreaded, and I could even do it in broad daylight. Lingerie looked like I thought it should. For the first time in my life, I had cleavage. I felt sexier because I was more confident.

Second, I hated them. I felt like a fake. Weirdly, while I preferred how I looked naked, I didn’t like how clothes fit me. I’d never appreciated my lithe frame until clothes no longer draped over me but clung and pulled. Instead of opting for plunging necklines and tank tops, I wore blouses and T-shirts to cover up my chest. One friend commented on this, wondering why I’d bothered to get implants if I was going to hide them. It was difficult to explain that I was still self-conscious, only now with my clothes on.

The most startling realization, however, was that I felt sorry for her – “her” being me, the girl who hated her small breasts. I wanted to tell her that she was wrong and that she was fine as she was. I thought about having the implants taken out within the first year, but after decades of wanting bigger breasts, paying for them and putting my body through the ordeal, I decided I should stick with them. Surely these doubts would vanish over time. I wanted to look like this, remember? I would learn to love them, to love myself. That was the point, right?

“By my mid-40s, I was single and happy and had fewer fucks to give. I no longer cared about having the perfect female form. And what was that anyway? ”

Men were surprisingly neutral. To be clear, before the implants, not one man ever said a negative thing to me about my breasts. Never. And it was the same after the implants. It took decades for me to learn this simple fact about men and sex: They may have preferences, but when it comes to actually getting laid, few care about breast size. They’re just happy you’re naked.

As the years went by, I got used to my implants, but I never loved them. What did change was that I went from feeling totally insecure to having confidence in who I was. It was gradual, this new self- acceptance, but it grew stronger with time. I was a successful journalist and author. I owned my house. I had great friends. By my mid-40s, I was single and happy and had fewer fucks to give. I no longer cared about having the perfect female form. And what was that anyway? Who decided what was perfect? And why had I allowed myself to fall victim to it?

When I reached 50, I’d had enough. I wanted to return to the real me—the flat-chested, raisin-tits, grapes girl I’d been most of my life. It was time for redemption.

That’s how I found myself back in Dr. Mulholland’s office 17 years later. He told me that in the 25 years he’d been a cosmetic surgeon, he’d performed around 2,000 breast augmentations. Of those women, he said, less than 1 percent had opted to have them removed for aesthetic reasons, putting me in the minority. In fact, breast augmentation remains the most popular cosmetic surgery in the United States (there are no Canadian stats), with 313,000 women opting for implants in 2018—a 4 percent increase from 2017.

Dr. Mulholland has noticed this surge in his practice and said that the trend is being driven by millennials and gen Z. “They’ve adopted cosmetic enhancement more than any other generation,” he said. “It’s part of their typical management. They view it as being proactive and [a way] to be more employable and datable. But they’re doing it for themselves. They don’t give a shit what their boyfriend thinks. They want to do it to get another, better boyfriend. They are very action-oriented.”

“Who decided what was perfect? And why had I allowed myself to fall victim to it?”

With regard to my implant removal, he explained that it would take between six months and a year for the scar tissue to mature. I would also have the option of undergoing fat grafting for added fullness down the road if I wasn’t happy. “I can take fat out of the thighs and give you an extra quarter to half of a cup size,” said Dr. Mulholland. “Basically, a little more oomph.”

What he couldn’t predict was how my breasts would rebound. The tissue and skin had been stretched for nearly two decades, after all, and there was a chance they would sag or flop like the ears of a hound dog. It was a risk I was willing to take.

The surgery would be done under local anaesthetic. Dr. Mulholland would make an incision beneath the breast, deflate the saline implant and then remove it. I already had barely visible half-moon scars beneath each areola from where the implants went in. Now I’d have two more.

To say I felt lighter after the procedure sounds like a bad joke. But in a literal sense, it was true. There was no longer a physical sensation of weight on my chest. And I instantly felt more like me. When the bandages came off and I looked in the mirror, there she was. There I was. These were my breasts and my scars – my self-esteem battle scars.

I was lucky that my breasts bounced back better than expected. The implants had stretched the skin, giving them the rounder, fuller appearance I’d always wanted, and there was no sag or flop. In fact, a female friend commented that I have the breasts of a 20-year-old, which made me smile because in some ways I do. It is as if I have gone back in time but retained the wisdom of age. They are no longer the breasts of an insecure twentysomething woman who hated them; they are the breasts of a fiftysomething woman who has learned to accept and like herself. And she and I love my breasts.

This article originally appeared in the May 2020 issue of ELLE Canada. Subscribe to ELLE Canada here or buy a digital copy of the May issue here.