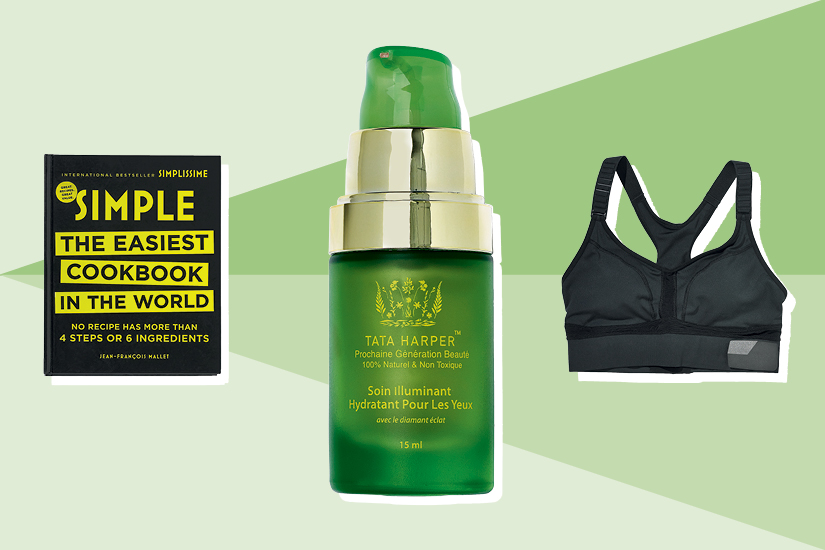 For anyone who has ever opened up a recipe book, been overwhelmed by the Kanye-rant-length list of ingredients and decided to order in instead, we present Simple: The Easiest Cookbook in the World. This “simple” tome has taken France by storm, seducing that nation of gourmands with its no-BS selection of recipes – from saffron risotto to roast lamb – all presented with minimal ingredients and steps. It’s not pretty, but it takes the intimidation factor way down, and, seriously, you’re more likely to cook from scratch when that chicken dish takes four steps, has three ingredients and doesn’t ask you to do anything with a spiralizer, no?

Simple: The Easiest Cookbook in the World ($24), at chapters.indigo.ca. Image by: Geoffrey Ross

The runways gave us plenty of inspo for embracing soft and feathery lashes that don’t need to be scrubbed clean at night. At the Louis Vuitton, Marni and Prada fall/winter 2016 shows, lids and lashes were left nude. Spring/summer 2017 pushed the message further, with mascara wands collecting dust at shows like DKNY, Lacoste and Alexander Wang. Feel more relaxed about bare lashes by opening up the eyes with Tata Harper Illuminating Eye Crème ($127, tataharperskincare.com). It contains brightening diamond dust, which means it doubles as a shimmering eyeshadow.

3. Actually pay attention when you brush your teeth.

Fun fact: Brushing your teeth while packing your lunch and checking your Snapchat does not a quality clean make. A motion sensor inside the Oral-B Genius 8000 electric toothbrush ($269.99, at drugstores and mass-market retailers) links to your smartphone camera to track down the spots you aren’t cleaning.

After Gigi Hadid fearlessly strong-armed a handsy prankster in Milan, we immediately signed up for the supe’s go-to workout: boxing. But if the Rocky Balboa thing isn’t quite you, try a hybrid class that integrates this throwback fitness trend with some of your fave millennial workouts. Studio Lagree (studiolagree.com) in Toronto offers combined Pilates/boxing classes, and Studio Breathe (studiobreathe.com) in Quebec combines kick-boxing with yoga.

5. Make your sports bra work for you

For the ultra-athlete who sweats like Venus and Serena, the Montreal-based OMbra acts like a pocket personal trainer, funnelling information about your exertion directly to your iPhone via the brand’s OMrun app. By synthesizing the stats from your heart and breathing rates, the app will nag you to try a little harder next time (think Coach Taylor, not Sue Sylvester) or tell you when to scale back to prevent overtraining and injury. Aesthetically, the athleisure-approved mesh backing feels fresh, the colourway is vivid and the adjustable straps and removable pads allow for a custom, comfortable fit.