10 exercises to get you beach body ready

Get your body in shape for beach weather now with these tips! 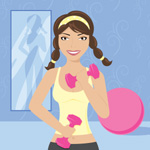 Bikini season is only months away, so its time to get that bod toned, sculpted and ready to strut your amazing self down a sandy beach in an itsy-bitsy two piece. To find out how to get your body in tip-top shape for beachwear, ELLE Canada enlisted the help of Jenn Scott, a trainer for Beach Body Boot Camp to give us the ten best exercises to target problem areas for bikini season. To get the ultimate beach body, she recommends doing the following exercises 3 times per week with 1-minute bursts or cardio in between, such as jumping jacks, stair running or running on the treadmill. Remember to stretch all major muscle groups in the body after your workout to keep muscles long and lean. Hold each stretch for 10 slow, deep breaths.

1. Work that tush! Single Leg Squats —Sculpts the glutes.
Stand on one leg with opposite toes touching lightly beside supporting foot for balance. With hands on hips squat down as though you were sitting onto a chair. Keep chest and eyes up, an arch in the lower back and ensure the knee does not go beyond the front toe. Allow the muscles of the supporting leg to do most of the work as you squat down slowly and come back to standing by contracting the glute muscles. Breathe in as you squat down and out as you stand up. Repeat this movement for 20 reps on each leg.

2. Tone your tummy! Ab Circles on the Ball — Sculpts the entire mid-section.
Sit on a stability ball with lower back supported by the ball. You may do this exercise with feet resting against the wall for balance. With hands at the temples, begin with a side bend to the right, then arch back and come full circle through a side bend to the left and then up to your starting position. Perform 10 continuous circles to the right, followed by ten circles to the left. Breathe in for the first half of the circle and breathe out for the second half. Concentrate on contracting the muscles of the abdomen through the entire range of motion.

3. Firm your backside! Lying Ball Raise — Sculpts the glutes.
Lie face down on a mat with legs stretched and turned out, toes pointed and holding a small stability ball between the ankles. Rest the forehead on the hands. Keeping legs stretched and squeezing the ball between the ankles, contract the glute muscles to raise the ball off the ground as high as possible (most likely a few inches). Try not to use the upper body at all: Focus on allowing the lower body to perform the movement. Breathe out as you lift the legs and in as you lower. Raise the ball slowly and lower to ½ an inch off the ground. Perform 15 repetitions, rest and repeat.

4. Get fierce legs! Jumping Lunges — Sculpts the entire leg.
Stand with the back facing an exercise bench or chair. Place the toe of the back leg on the bench with legs in a wide lunge (holding dumbbells or with hands on the hips). Keeping the back toe on the bench, lunge down with the front leg and then explode into a single leg jump and land softly, working through the foot and moving smoothly and continuously into another lunge. Breathe in as you lunge down and out as you jump up. Repeat this movement 10 times and then switch legs. Do two sets of 10 with each leg.

5. Tone your legs! Ball Hamstring Curl — Sculpts the hamstrings.
Lie face up on a mat with the bottoms of the feet on a stability ball. Raise the hips up in the air in line with the rest of the body. Contract the hamstrings to roll the ball in toward the butt, and then roll back out again. Be sure to keep the hips pressed up as high as possible and hips, knees and feet parallel. Breathe in as you roll the ball in towards you and out as you roll it away. Perform 15 repetitions, rest and repeat.6. Slim your hips! Ab Curl with Ball Between Legs — Sculpts the abs, inner thighs and hip flexors.
Lie face up on a mat with legs bent squeezing a small stability ball between the knees. Place the hands at the temples. Contracting the abdomen, curl the head and shoulders off the ground as you raise the legs off the ground in toward the upper body. Then release keeping the legs a few inches above the ground. Breathe out as you curl, and breathe in as you release. Repeat this movement 30 times, rest and repeat.

7. Sculpt your legs and butt! Lying Hip Raises — Sculpts the glutes and hamstrings.
Lie face up on a mat with knees bent and hips, knees and feet parallel. Contract the glutes and hamstrings to raise the hips off the mat in line with the body and then lower keeping hips one-inch off the ground. Breathe out as you raise the hips up and in as you lower. Do 15 repetitions, then rest and repeat.

8. Target your core muscles! Plank — Sculpts the full body with an emphasis on the core.
Begin on all fours on a mat. Then move into the plank position by resting on the forearms and extending the legs out to balance on the balls of the feet so that the entire body is parallel with the ground. Breathe in and out slowly and concentrate on keeping the abdominal muscles contracted. Work up to holding the position for one minute, rest and repeat.

9. Get a sexy back! Seated Row — Sculpts the muscles of the back.
Using a resistance band, sit upright on a mat with legs stretched and flexed. Holding the resistance band with both hands, wrap it around the bottoms of the feet. Adjust the tension accordingly and proceed to contract the muscles of the middle back to draw the hands in toward the chest. Keep the elbows in close to the body, the chest open and the head lifted slightly. Pretend you are squeezing a pencil in between the shoulder blades. Then release slowly with continued resistance. Breathe out as you draw the hands in toward the chest and out as you release them away. Perform 15 repetitions, rest and repeat.

10. Sculpt your thighs! Side Hip Raises — Sculpts the thighs and core.
Lie on the side of the body on a mat, propped up on the forearm with legs bent. Raise the hips of the ground while simultaneously lifting the top leg. Keep the abdominal muscles contracted and the legs parallel with one another. Then lower slightly to one inch off the ground. Breathe out as you raise the hips up and breathe in as you lower back to the mat. Repeat this movement 15 times on each side.

Learn more about how to get the ultimate beach body and about the Beach Body Boot Camp by going to www.beachbody.ca