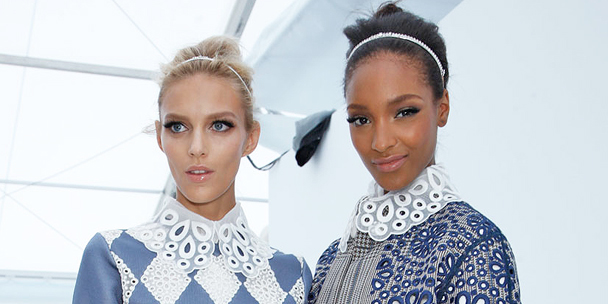 Some of the most memorable updos on the Spring 2012 runways were of the embellished kind. While we saw loud iterations of hair wear, like floral Carmen Miranda-like fascinators from Moschino and Dolce & Gabbana, in many instances they were wearable ones that transformed everyday
hair styles with with delicate touches of hair accessories. In Chanel’s case, it was the addition of the underwater treasure, the pearl. In Jason Wu’s, it was prickly feather pins adding an element of toughness to a classic updo. Louis Vuitton and Roberto Cavalli used thin headbands to add a touch of pretty to their chignons. Yves Saint Laurent and Marc by Marc Jacobs looked to elegant hardware to secure their models’ tresses. And Michael Kors turned to a story of makeshift resourcefulness for his Safari themed collection.

As seen at: Chanel

True to its aquatic theme, the hair at Chanel’s Spring 2012 show was damp and adorned with pearls—a jewel that is so closely associated with the house of Chanel. Lead hairstylist Sam McKnight described the models as “mermaids,” although these little Chanel pearl pins are similar to the ones that can be found in bridal shops—minus the double Cs. With the hair pulled back in a classic chignon, each model was adorned with about eight, loosely placed in-between tresses, so that it appears almost spontaneous.

As seen at: Jason Wu

Gone are last year’s feather extensions. This season, the feathers are much smaller and much more delicate. To compliment Jason Wu’s lady-meets-graffiti Spring 2012 theme, hairstylist Odile Gilbert created an updo by twisting small sections of the hair, putting them into loops, pinning them to the head, and embellishing them with thin black feathers and bobby pins. Gilbert purposely made the updo look messy, making it appear as though one could do it themselves. On one hand, it’s very refined, and on the other, a little bit prickly and punk.

Embellished headbands, buns and braids on the next page …

As seen at: Yves Saint Laurent, Marc by Marc Jacobs

Metallic hardware adds sleekness to one’s updo, whether its glamorous and opulent like Yves Saint Laurent’s Spring 2012 shiny gold cage barrettes, or simple Goody ones like those used for Marc by Marc Jacobs’ presentation. Both looks were crated by Guido Palau, who gave Yves Saint Laurent a sophisticated chignon encased with oversized gold hardware. For Marc by Marc Jacobs, Palau kept it simple with a high ponytail that was secured twice with a long silver Goody barrette, making it a hybrid of a pony and a bun.

Feminine and pretty, headbands made a return for Spring 2012 at Louis Vuitton’s dreamy pastel-coloured collection. It was another look brilliantly orchestrated by Guido Palau, creating messy French twists adorned with crystal-embellished headbands (and, in some instances, tiaras). Another chignon and headband combination also came from Palau, this time for Roberto Cavalli, where models sported gold and black headpieces in that typical opulent, rock and roll goddess way that Cavalli is so famous for.

Messy was also a theme behind Michael Kors’ leather-accented braids. The disheveled chic made sense for his African safari inspired collection. Hairstylist Orlando Pita got the idea of using a thin leather band as something women would resort to when they were short of hair accessories. “They take their shoelaces and tie up their hair in the back,” explained Pita. He created two fishtail braids, weaving two hair sections and two sections of leather laces, and then pinning them together to look like one.

For a simpler take on leather, consider the low ponytail at Reed Krakoff, secured with a delicate little leather band tied into a plain knot by hairstylist Guido Palau.

Test out the latest celebrity hair styles with our Virtual Makeover Tool!