“Children will call you on your bullshit, and you want nothing more in a scene than making sure it’s true." 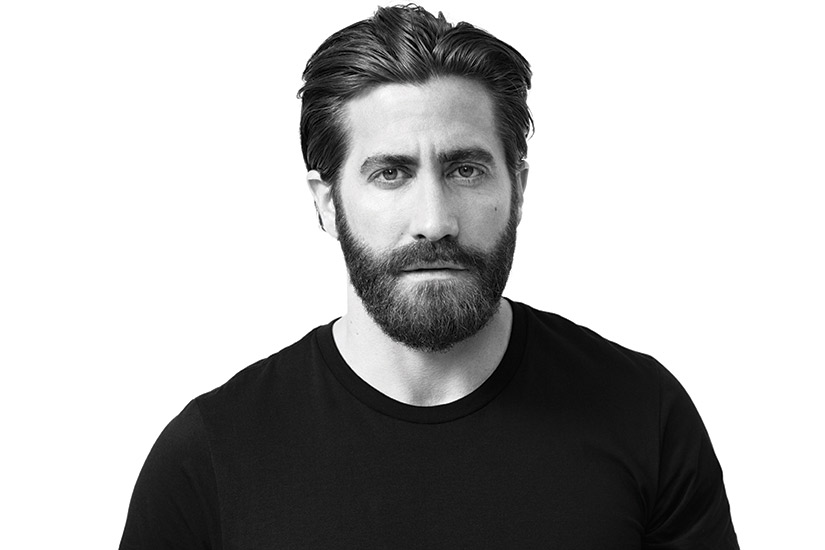 Jake Gyllenhaal claims that he’s not much of a poetry guy, but here he is, pulling bits of Emily Dickinson out of thin air, looking like an Ivy League lit professor in a burgundy V-neck and plaid pants. “There’s this line, ‘There’s a certain Slant of light, / Winter Afternoons’…. That’s one that I return to, that affects me emotionally,” he says.

It’s possible that that particular piece of verse sprung to Gyllenhaal’s mind because of the setting: a swish New York hotel room whose giant loft-style windows let in broad beams of late-afternoon sun. It’s not, one assumes, because of any tonal link to the project we’re here to discuss, because while Dickinson goes on to talk of scars, oppression and “Heavenly Hurt,” what Gyllenhaal is referring to is a warm, intimate portrait of domestic bliss.

“It’s about love, about being a person,” he says of the new fragrance campaign for Calvin Klein’s Eternity Air, which features the 37-year-old alongside models Liya Kebede and four-year-old Leila together as a family. “Love isn’t always a sweeping melodrama. There’s a deep simplicity to it. It’s lying on a couch, reading something to a child, getting a hug.” (All of these things happen in the artfully shot spot, by the way.)

Gyllenhaal isn’t just the (admittedly very pretty) face of the project. His company, Nine Stories, prod­uced the new campaign, and he’s trans­parent about how having that creative control is the reason he agreed to sign on. “When [Calvin Klein creative director] Raf Simons approached me, I had a lot of skep­ticism, because in the past when I was approached for similar things, there was an agenda,” he says. “But he was just very interested in me and how I express myself as a filmmaker as well as an actor. I said I wanted to be a part of it in all aspects, and he said that that was wonderful.”

The word “honesty” comes up frequently as Gyllenhaal discusses both this project and anything else he involves himself in. Although he admits that “this world” (by which he means advertising campaigns) can feel “fabricated, performative,” he says that he related to the emotions that inspired Calvin Klein to create the fragrance 30 years ago. “What got me was that he conceptualized it when he became a father,” says Gyllenhaal. “The idea was filled with whimsy but also the darkness and beauty of the things you leave behind when you become something new.”

That link to family remained a central part of this imagining of Eternity. An e. e. cummings poem, [i carry your heart with me(i carry it in], is recited throughout the spot. It’s a choice that was actually driven by the campaign’s youngest star. “We picked out five or six options beforehand—some Walt Whitman, some Shel Silverstein—and I read them to Leila, but she just wasn’t engaging,” says Gyllenhaal. “Then I read her the cummings, and you could see in her eyes that she really understood what it meant.”

Contrary to the adage about not working with animals or children, Gyllenhaal actually loves it. “Children will call you on your bullshit, and you want nothing more in a scene than making sure it’s true,” he says. “Having that barometer right there [with Leila] was priceless, so we centred it around her. A family should be centred around children.”

Something he doesn’t consider to be a place of authenticity? What he perceives as that land of “weird camera angles, dogs, bikinis and shirtless dudes at gyms”: Instagram. “We have this obsession with youth and physical beauty,” says Gyllenhaal. “It’s beautiful that you want to share, but I think we live in a time when there is no thought that our elders should have a voice. People who know more than us about certain things because they’ve experienced more should be respected. Just because I feel something about something doesn’t mean it’s true.”