Chloë Grace Moretz on feminism, fragrance and the American election

"We can wear a floral sweater and still be the CEO of a company." 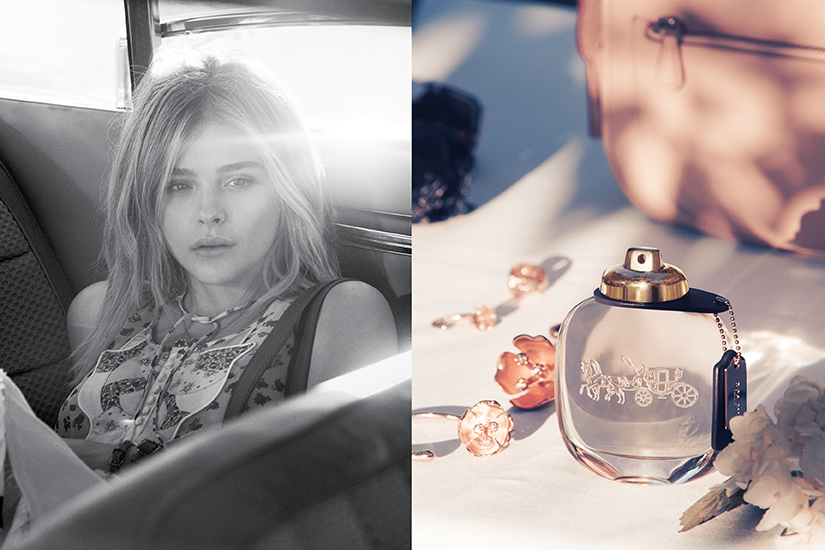 Here’s the thing about luxury brands: Part of their mystique is that they are un-attainable to most. But Coach isn’t about intimidation, asserts Stuart Vevers, the brand’s executive creative director. “Coach is not just about a status of wealth; it’s about a certain ease,” he says at the launch of the American fashion house’s latest fragrance, Coach Eau de Parfum, in New York City. “It’s about playing with what I consider to be the new codes of luxury.”

When he was deciding on the notes for the scent, it was the Coach girl – someone with a “downtown” sort of attitude, says perfumer Juliette Karagueuzoglou – that Vevers had top of mind. He pictured a young woman heading out on an adventure, much like the cross-country road trip that Chloë Grace Moretz, the face of the fragrance, took to celebrate her 18th birthday last year. “It isn’t about a fantasy jet-set lifestyle,” he explains. (Think a windblown Moretz in  a vintage Cadillac, not a reality-TV star flossing in a Rolls-Royce Ghost.) “A sense of inspiration, joy and  optimism is at the heart of this fragrance.”

Below, we talk with Moretz about her fragrance wardrobe, feminism and the American election.

So what do you like most about this fragrance?

I love that the fragrance really does capture the idea of young women right now. It has notes of Turkish rose and raspberry, which are sweet and soft and light, and then it has a sexy sandalwood leather and musk. These notes allow you to embrace your sensuality, which is what we are finally doing. We understand that we don’t have to be ’80s CEO power women, and we also don’t have to be ’50s housewives. We can wear a floral sweater and still be the CEO of a company.

Yeah, which I still love. Rihanna can wear them any day.

Growing up with brothers, was there ever a time when you guys were all experimenting with different scents at the same time? Like did the house ever smell entirely of Axe?

100%. My whole life we’ve experimented with scents. They share my cologne; I share their cologne. I wore Old Spice deodorant for a while. I have two gay brothers and two straight brothers, so we’ve bridged every gap. Even with my boyfriend [now ex-boyfriend, Brooklyn Beckham], we fully share each other’s scents. It’s dope.

Do you remember the first fragrance you ever purchased?

My first real fragrance at 12 years old was [Viktor & Rolf] Flower Bomb and it was a big deal for me. I remember the big shift though at 15, I was like, ‘I’m going to go musky’ and I bought Gucci Rush. I was like, ‘Ooh, I’m hot shit.’ [Laughs] And then I got Byredo Gypsy Water, then I went to Santal [33] by Le Labo. It was a huge shift, from floral to musk.

Coach is a luxury brand, but it’s very accessible. I know that’s something you’ve been very open about too – not excluding people.

Coach is an interesting brand because we have a lot of the same ideals. We’re kind of re-embracing Americana, which I feel like has been demonized for so long. We couldn’t feel happy while being Americans. I think this election is really interesting, because it’s gotten a lot of people back into American politics and just speaking up – being proud to be a young adult in America, having rights and being able to push them through and change our governmental system.

Exclusivity is out the window. The idea of only having your little clique of friends is done. I have the most varied group of friends – in varying age ranges, all over the world, in  different socio-economic situations – and I think that our generation is a generation of freedom in a lot of ways, which is cool.

The bottle’s design is a nod to classic Coach elements: a gold turn lock reminiscent of the clasp on the brand’s handbags, a hang tag and the horse-and-carriage logo. Coach Eau de Parfum Spray ($90 for 50 mL).