Give your makeup a beautiful boost with the latest bevy of primers. 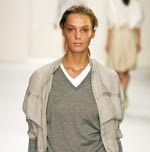 This season, the full-out face is back. And the new crop of primers are the best way to get that flawless look.

“Primers act as a buffer between your skin and makeup,” says Nick Gavrelis, director of global product development at M.A.C and part of the creative team for M.A.C’s new primer collection (on counters early next year). “This barrier zone will help maintain truer colour and fresher-looking makeup on the skin’s surface and can help minimize the need for frequent touch-ups.”

Face case: Effective primers contain unique polymers that create a film-like barrier on the skin. This results in a smoother surface and a more even application of both water- and emollient-based foundations, while also protecting against free radicals.

Prime time For those with oily skin, primers form a protective barrier between makeup and oils that can accelerate the breakdown of foundation. On dry skin, they prevent the moisture in cosmetics from being absorbed into the skin, which can result in an uneven distribution of makeup on the face.

Best face forward Michel Coulombe, makeup artist with Laura Mercier, suggests starting with a clean face and applying your usual moisturizer. Follow with a thin layer of primer on the whole face, including eyelids. Then apply your foundation and concealer. “Primers are so lightweight that they dry to a matte finish at once,” assures Coulombe. Try Laura Mercier Foundation Primer.

Lip lock: “Lip primers smooth and replenish the lips and do wonders to prevent feathering, especially with darker lip colours,” says Jenia O’Connor, senior makeup artist with M.A.C. She recommends trying them outside of the lip line too. “Primers can fill in fine lines around the mouth, thereby making them look more hydrated.” Try L’Oréal Volume Perfect Re-Shaping Lipcolour, which is a two-in-one primer and lipstick.

Eye opener: To guarantee lush, Twiggy-inspired lashes, lash primers are the way to go. “The primer separates and lenthens eyelashes. It’s remarkable how much more drmatic eyes appear,” says O’Connor. Apply the primer first and follow with two coats of mascara. Try Clinique Lash Building Primer. To keep a crease-free zone on your eyelids, apply an eye-specific primer from the lash line to the brow, such as Tony & Tina Herbal Eye Base. “It will ensure that this season’s smoky eye stays put,” says Coulombe.

From a bloody Dracula French mani to cobweb digits, here are 30 nail styles to celebrate fall's most fun holiday.

7 Fall Nail Trends to Inspire Your Next Manicure

The 10 New Fall Beauty Products That Will Change Your Life