What went down at the Moschino x H&M Show

Jeremy Scott and H&M paid homage to NYC in the most meta way possible to celebrate their collaboration. Here’s what went down at the party last night. 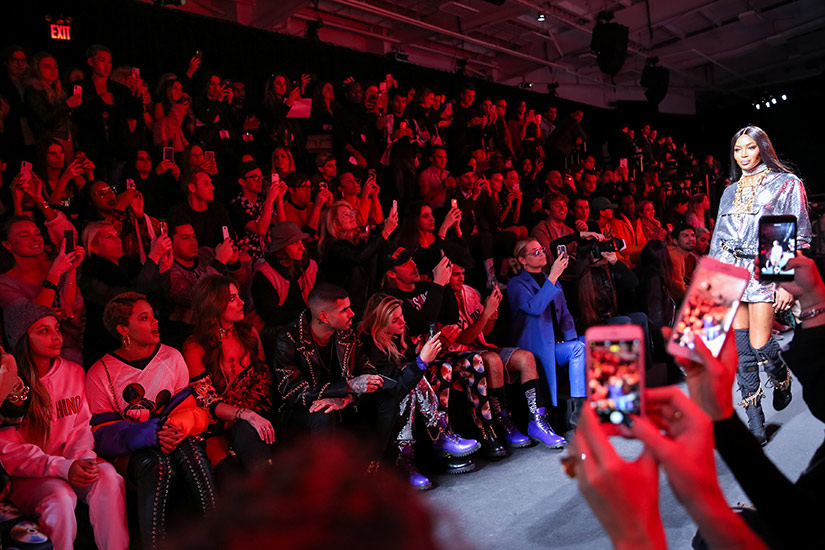 Pier 36 was the venue of choice and as you entered you were immediately transported to the heart of Time Square with a giant build out of the city skyline. The space was lit in a blanket of neon hues from the mix of custom made broadway, bodega and LED screens. Guests were perched on an elevated platform giving off the vibe of city stoop hangs — perfect for this type of people watching.

There was no shortage of celebs decked out head-to-toe in sequins, mesmerizing prints and iconic cartoon characters. Frances Bean Cobain, Diplo, Amanda Lepore, Coco Rocha and Aquaria from RuPaul’s Drag Race all walked the red carpet. But it was Paris Jackson who got the media in a frenzy when she showed up in a leopard print mini dress, a logo choker and quilted, chained thigh high boots.

Boy, did the Moschino and H&M team put in the “werk.” Evocative of NYC’s underground ball culture, the models swagged down the runway showing off their best walk. Even show-goers couldn’t help but to bop to the soundtrack with throw backs like Run-DMC’s “It’s Like That.” The entire show was a love letter to New York — it was even streamed live at Time Square.

Immediately after the finale, guests began climbing over each other to be one of the first to get their hands on the collection. The first items to go was the cropped red bomber, thigh high boots and most of the accessories. The line to shop thinned out as the evening went on but showgoers were still shopping until late in the evening.

Bites were passed around as Diplo took the stage and got the party started. If you ever questioned if he was a good DJ, just ask the maintenance crew. One woman couldn’t help but to put her broom down to bust a few moves along side Creative Advisor of H&M Ann-Sofie Johansson and model Isabeli Fontana.

If vogueing wasn’t your forte, Moschino x H&M had an incredible interactive augmented reality installation where you could see the campaign videos truly come to life.