Shoe guru, Christian Louboutin, has a shoe style for every man's taste and shares why foot fashions are so important. 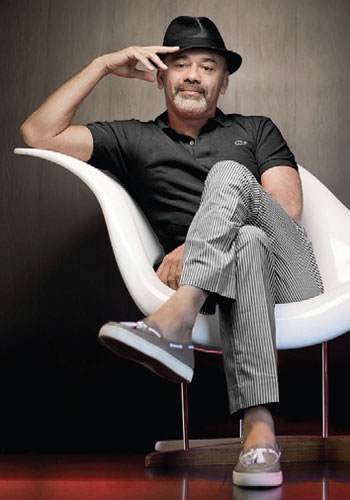 A casual observer of pop culture could be forgiven for believing that only women lose their heads – and hearts – over the perfect pair of shoes. But in Christian Louboutin’s experience, men can be just as fanatical about footwear as les femmes.

“It’s almost like a disease,” muses the designer, who launched his first men’s collection in 2010, almost two decades after founding his eponymous company. This August, when the opening of Louboutin’s New York men’s store – his first in North America – was delayed by a few weeks, men scribbled their email addresses on the windows, asking the designer to send them the exact opening date.

In Louboutin’s native Paris, the site of the brand’s first men’s boutique, men still approach him on the street to say thank you. “They tell me ‘I saw your shoes on my girlfriend or my wife and I was almost jealous. Now I can have the same freedom.’”

Louboutin traces the elation to a desire for self expression – he believes that the “funky” shoe is the modern male’s choice of sartorial iconoclasm.

“A man wearing a black suit with a white shirt who wants a sparkly, colourful element – not a bowtie or a vest for the English – will definitely choose wild shoes,” suggests Louboutin, whose first memory of male shoes was “an incredible sandal” on a statue of Louis XIV. “For the first time, I saw how men’s shoes could be delicate, complicated, sophisticated and very masculine.”

Footwear excitement may apply to both sexes, but Louboutin has discerned the main difference in the way men and women approach shoes: Men treat them like products, not “sacred objects.” They try on a shoe, appraise it (only from the front) and make a decision.

“They’re not interested in passing them on to their kids,” says Louboutin, laughing. The designer, who test drives all the men’s shoes, incorporated these distinctions into the design of his stores. They’re bigger, because men – and the shoes – are bigger.

The products are displayed at hip height, so that customers can see the detail on the top of the shoe-like the metal toe on this fall’s brogue, which Louboutin cites as his favourite piece of the season. (“It’s very cowboy-ish, very English classic.”)

And there are cool, customized elements: In the New York store, men can have a digital print of their tattoos embroidered onto their shoes. “I like women with shape, and a heel creates a curve, but my designs for men are more angular,” explains Louboutin. “On a man, the leg is straight-the foot goes out straight, creating a right angle.” As far as fashion geometry goes, you only have to look at the collection to see that the math checks out.