Canada's newest top model, Kate King shares her favourite fashion week moments, her celebrity crush, and we find out why the fashion world is at her feet. 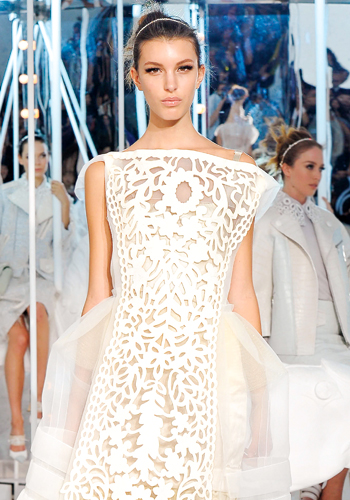 For fresh faces in the modelling realm, there are middling seasons, good seasons and great seasons. Then there are breakouts so fierce that the fashion world rises up en masse to claim its new star. Enter 17-year-old Kate King. After walking in a staggering 57 Spring/Summer 2012 shows—from Alexander Wang to Chanel—the Toronto native, with her luminous skin and killer cheekbones, is officially part of the style stratosphere.

“It has been a crazy year,” King laughingly agrees over the phone from Florida, where she’s visiting one of her sisters. “Sometimes it doesn’t feel real.” King’s big break kicked off during the Fall/Winter 2011/2012 shows last February, when she snagged a few coveted catwalk appearances (most notably at Prada) and then hit the couture circuit that summer at Alaïa Azzedine and Valentino. Her recent runway domination has been matched by campaigns for Topshop and Dolce & Gabbana. She has posed for mega-snappers like Mikael Jansson for Interview magazine and Boo George for LOVE. Of recently working with Patrick Demarchelier, she says: “He shot faster than anyone I’ve ever worked with. He took, like, two photos and he was done.”

King’s breathless tone reveals more than general excitement about her good fortune—she understands how special her rise is, having followed fashion since childhood. “I was the kid in school who always wore crazy things, like pink sparkly leather pants and fur collars,” she recalls. As a young teen, she leafed through Vogue Italia and Vogue Paris at local bookstores and was “thrilled” when her family switched cable networks because she could tune in to Fashion Television. “Fashion has always been such a hobby for me,” she says. “It’s amazing that it has turned into a career.”

King dreamed of becoming a fashion designer, but as a “tall, awkward, skinny girl” she has always been able to relate to models. Her favourite? Daria Werbowy, the Toronto-raised fashion phenomenon. “Daria was my best friend’s sailing instructor, and she always talked about her. We’d go through magazines looking for her.”

Fate found King on a family vacation in New York four years ago, when a model scout approached her after she had just seen Les Misérables. “I remember my sisters making fun of me afterwards. At the hotel, they wouldn’t let me get on the bed.” Her sisters are now “incredibly supportive,” but “it did make [her] wonder how people would react.” On the advice of her mother, King waited until she was 16 to enter the biz.

These days, King has a New York address and a lock on burgeoning independence. “If you can relax and believe in yourself, it takes you further,” she says of lessons learned this year. “After all, you can’t book every job. I just feel more confident and grounded lately. I guess I’ve learned to love myself a little more.”

Want to know about the world’s top fashion weeks from a top model’s point-of-view? We ask Kate to dish about the highlights from each city, on the next page…

French kiss “I love Paris, with its beautiful bridges and architecture. During Fashion Week, you’re in this crazy environment and then you look up and see Notre-Dame. It’s incredible.”

Chic set “It was very cool to be in Paris and walk in the Chanel show—it’s such an iconic French brand. I’ve watched all the Coco Chanel biopics, and I’m fascinated by her. The offices at Chanel are in the original building where she used to work, so being there was really surreal.”

City girl “New York is where I live now, and I feel really comfortable there. It’s home.”

Style star “In school, girls would say ‘You’re doing Fashion Week—wouldn’t it be amazing if you did
Marc Jacobs?’ Everyone knows him, even girls who aren’t into fashion.”

Grand Prix “Prada is one of the shows that everyone is always really hyped for. Everything happens lastminute, but it all comes together in such a cool way. There are always surprises— this season, there were cars on the backs of jackets!”

It Brits “At Burberry, everything runs so smoothly. This season, the show was held in a perfectly pristine white tent. I also like London because my sister lives there, and she stays with me when I’m in town.”

Catwalk calamity “Shoes can make a show difficult. I have small feet for a model—I’m a 7 or an 8—so it can be a little daunting when the shoes don’t fit.”