Three things I learned on Day 1 of London Fashion Week. 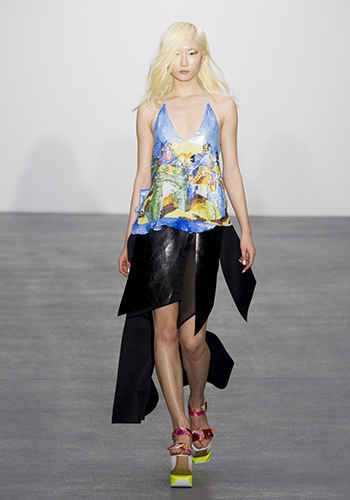 1. Designers are geeks just like the rest of us.
Fyodor Golan proved that fashion just wants to have fun. Show notes revealed that the inspiration behind the collection was none other than The Transformers, the iconic ‘80s robots. The influence, however, was far from superficial. The duo were given access to the Transformers archives, where they found never before released sketches, which they used to jumpstart the collection. The result? A fashion fantasy fuelled by asymmetry, 3D detailing and textural play. If this is the future, we’re ready for it

2. Cool kids rule the streets of London
The defining moment of London Fashion Week may very well have already happened, and all before the shows even started. M.A.C Cosmetics threw an epic bash to kick things off this week, inviting FKA Twigs to perform as the headlining act. While Twigs’ performance was the official highlight (yes, it was mind-blowing) the real show stopper was the fashion parade inside the venue. The guest list was curated, which meant the dress code was anything but posh. Instead, the real heart of London’s style scene was on display and it looked a whole lot like the new generation of club kid: it was unfiltered and raw, with the hard edge of the ‘90s.

3. All you need is a place to put your feet up
Rest is not part of a fashion editor’s vocabulary during Fashion Week, but the British Fashion Council, who moved this season’s spectacle to Soho–a neighbourhood on London’s cool kid watch list–has managed to create the perfect retreat for the frazzled but still functioning media, crews and lanyard-wearing guests. The limited access lounge looks like a souped-up living room, complete with plush sofas, oversized potted plants, and piles of strategically strewn books. And, beyond our wildest expectations, the space is catered by an organic, healthy eatery, whose charming chefs dish out avocado toasts, kale salad, immunity boosting broths and green juices. Oh, and did we mention there’s a coffee bar?