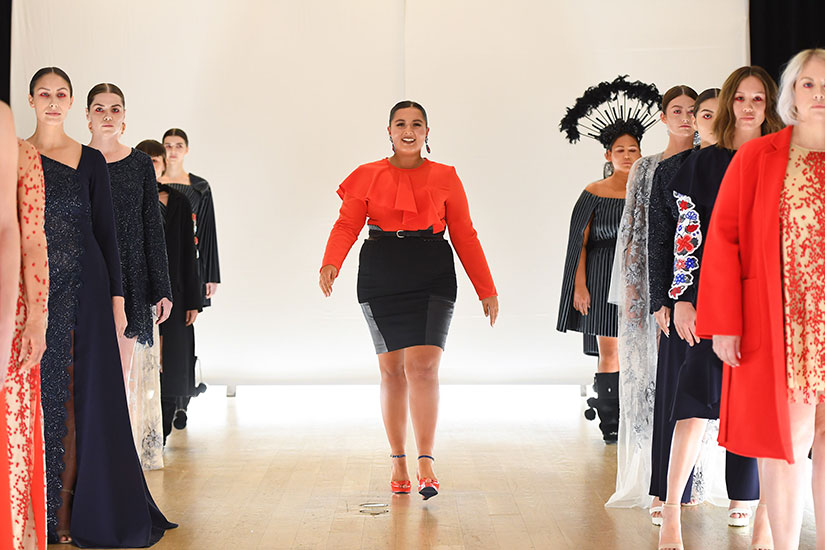 Part concert, part runway show and a complete celebration of Indigeneity and identity, Lesley Hampton made an unforgettable debut on the second day of Toronto Fashion Week.

The lights dimmed as Juno-nominated artist Iskwē stepped onto the runway and began to sing, her powerful voice reverberating throughout the show’s venue at the Gardiner Museum. Her performance set the stage for the collection, entitled Eighteen Seventy Six, which refers to the year that the Indian Act was passed. This legislation allowed the Canadian government to regulate the affairs of Indigenous peoples and communities, including who is legally recognized as Indigenous.

Hampton’s collection explored the idea of identity further, while acknowledging the traditions and history of Indigenous peoples in Canada. Cultural significance was represented in the colours and fabrics used — pleather as a tribute to traditional dress in Indigenous communities and blue to reference the impact of residential schools. She also collaborated with other Indigenous designers to accessorize the collection, like Helen Oro, who created the sculptural mouth and headpieces from acorns.

We caught up with Hampton after the show to talk about her casting decision, what she learned through creating the collection and change in the Canadian fashion industry.

ON CASTING ALL INDIGENOUS MODELS

“I found in the past, participating in a number of fashion weeks around the city, that there was a lack of representation for skin colour, especially Indigenous models, as well as body diversity. I really wanted to push that, given the opportunity to show at a platform like Toronto Fashion Week. I wanted to push a full statement and show that there are Indigenous models in the city but there’s a lack of representation, agency-represented models and we just wanted to change that. With the show, I think we did.”

ON THE SIGNIFICANCE OF THE DETAILS

“We included a poppy red this season in crepe, and the poppy red is very reminiscent to the [Missing and Murdered Indigenous Women and Girls] push for exposure and recognition. Each dot on the [embroidered mesh fabric] represents one of the women or girls that we have lost. We also included jewellery designers like Helen Oro, Iskwew Rising and Roberta Anderson, to accessorize the collection and show what modern Indigenous fashion and craft is.”

ON WHAT THIS COLLECTION MEANS TO HER

“I started researching this collection in October. I kind of had an internal struggle with my identity and Indigeneity, because I am Indigenous but I didn’t grow up in the culture so I always had this gatekeeping colonial concept around, ‘Am I Indigenous enough to call myself an Indigenous designer on these platforms?’ I had an internal struggle with that and through developing this collection and connecting with Indigenous bead workers, artists and craftspeople, as well as all the models that I casted for the show, it really grounded me and gave me the confidence to be an Indigenous [person] representing Indigenous fashion on this platform. It matured me.”

ON MAKING FASHION FOR EVERYONE

“I think the industry has to do a huge push for body diversity on the runway, as well as skin colour. Fashion should be for everyone and not exclusive to if you’re six foot and this stereotypical norm that fashion has been telling you to be. If designers and image makers make the conscious decision to cast and use models, stylists and makers from all different backgrounds, I think we can really show the diversity of Canada on a global stage.”