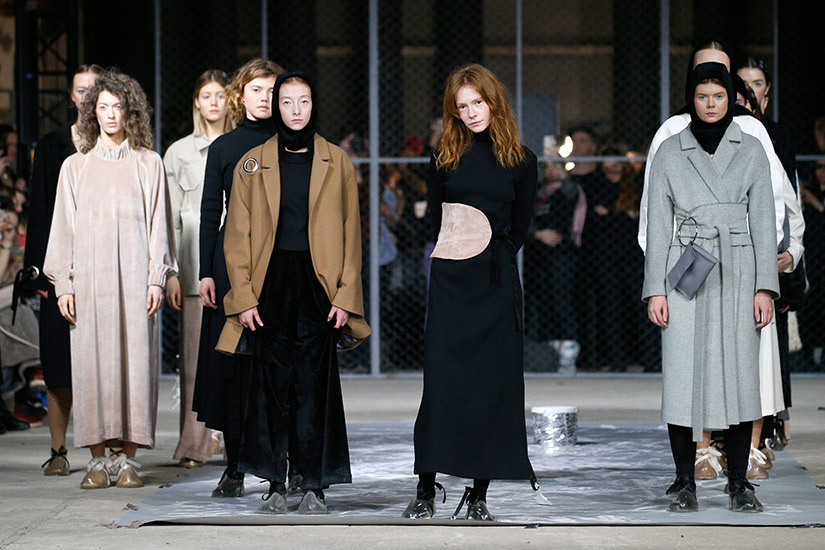 This season, I flew to Moscow to attend Mercedes-Benz Fashion Week Russia. The five-day event showcased the best of Russia’s design talent and featured both established labels and plucky newcomers. The shows took place inside the Manège, a neoclassical exhibition space just beside the tourist-packed Red Square. Outside, youth dressed in Cyrillic logo tees and Louis Vuitton sneakers posed in front of an eager crowd of street style photographers. In fact, the two locations were so close together, it was hard to tell who was posing for a style snap, or a simply a photo to send back home to mom.

While so many fashion weeks around the globe are grappling with an identity crisis, or questioning their need to exist, the scene in Moscow paints a different picture. The guests, which include teenage influencers in borrowed Prada as well as international fashion editors, were keen to attend, no one seems cynical or “over it.” And at the end of many of the shows, designers were showered with ostentatious bouquets befitting a pageant contestant. It’s a city that’s hungry for fresh fashion, and eager to support its own. Here are the top collection that prove there’s more to Russian fashion than Gosha Rubchinskiy.

By the time I made it to the final show of the first day of MBFWRussia, I had been awake for at least 30 hours, most of that time spent in transit to Moscow from Canada. Nearly delirious with exhaustion, I was past the point of coffee. But the high-octane glam at Arut Mscw jolted me awake. Central Saint Martins alum Arut Arustamyan presented a slick collection of vinyl minis, chin-grazing ruffles and sequins galore. Accented by Matrix-style tiny glasses and hot-pink booties, it was an eveningwear collection for the here and now.

One indisputable fact about Russian designers working today is that they find themselves under the shadow, and at times the influence, of streetwear darling Gosha Rubchinskiy and Georgian designer Demna Gvasalia. As a result, some collections defaulted to heavy use of Cyrillic lettering and bold typeface logos. This was the case for N. Legenda designers Nikolay Legenda and Olga Kapitonova. But if you looked past the black and white logo lettering, you’d notice intriguing silhouettes and striking layers. Androgyny was also something the design duo executed well, as seen in the twisted shirting and oversized outerwear, which would have looked good on basically anyone.

Alexandr Rogov is a famous figure on Russia’s fashion scene, having made a name for himself as a television fashion fixture. In fact, Rogov doesn’t call himself a designer, “I’m a stylist first,” he told me backstage after the show. “It’s very important for me to make clothes that can be worn on the streets,” Rogov said of the collection, which transitioned from printed chiffon dresses to asymmetric outerwerwear and boxy suits in bold hues like cerulean and candy-apple red. Some of the strongest looks were the cropped tuxedo blazers paired with flouncy pencil-skirts in tonal shades like lilac. “My woman is strange, crazy but at the same time she likes to be comfortable.” These clothes clothes fit the bill.

Halfway through fashion week, Anastasia Dokuchaeva emerged as the one to watch. The designer, who said she “doesn’t believe in inspiration,” presented an impressive (and one could argue almost excessive) 48 looks. The vibe was sharp, edgy and playfully futuristic. The satin suiting impressed, as did her deft hand with layering and mixing textiles like corduroy and funky jacquard. The accessories—like iridescent cellophane totes and shades—wowed the crowd.

Although based in Shanghai, St. Petersburg native Artem Shumov is one of the rapidly rising stars of Russia’s fashion scene. Back in 2016, he was selected from a group of young designers to show at Russia Fashion Week for free. Shumov’s fall collection, which features plenty of tailoring with a streetwear slant, has already been picked up by GUM, Moscow’s luxury mall in the heart of Red Square. The menswear designer (it’s worth noting that many of his pieces skew unisex) themed his collection after childhood naiveté, and painted each model’s face with simple, primary coloured doodles.

On the final day of MBFW Russia, journalists and influencers gathered at the Museum of Moscow for a full day dedicated to young, underground designers. Otocyon’s show opened with a model walking onto the runway with a large brush and bucket of white paint. As she painted abstract shapes onto a canvas on the floor, models walked out dressed in subtly striking maxi dresses and textured coats in a restrained palette of bone, blush and black.