All the Highlights from Alexander Wang’s latest show 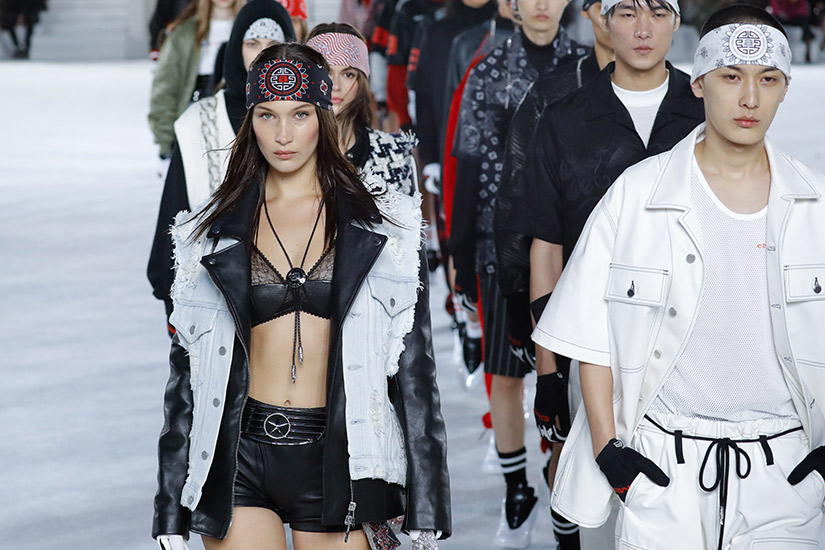 The designer presented his first off-season show, appropriately titled “Collection 1,” on Pier 17’s rooftop in New York yesterday. The stark, all-white runway overlooking the Brooklyn Bridge and the city’s iconic skyline was the perfect blank canvas to tell this important story: The collection was a nod to his family’s immigration story and his Asian-American upbringing — Wang was born in San Francisco, but his family is from Taiwan — through pieces inspired by motorcycle and football culture (like oversized leather jackets and jerseys) combined with traditional Chinese clothing and motifs. “I share with you my pride in being an American with immigrant roots,” said Wang in his show notes.

Here’s everything you need to know about the epic collection.

Notably, Collection 1 marked the designer’s departure from the traditional New York Fashion Week schedule. He joins a number of prominent designers who’ve also opted out of the city’s fashion week, including Rodarte, Proenza Schouler and Altuzarra, as the industry re-evaluates its seasons to better serve today’s customer. Wang has said he’ll show every June and December.

The impetus for the collection was the immigration story of his Taiwanese parents, which Wang revealed he hadn’t heard about until a recent family reunion. The designer wove his own first generation story through references to Americana and pop culture. After his post-finale bow, Wang stopped to give his family hugs — this show is the first one that his father has seen in-person. (Pass the Kleenex.)

Accessories at the Alexander Wang Collection 1 show  Image by: Getty

All About the Accessories

Bedazzled “thank you” shopping bags and safety pin-embellished lace surgical masks were just a few of the eye-catching accessories to go down the runway. The looks also featured a chinoiserie and paisley-inspired bandana prints, bolo ties and statement belts adorned with Mercedes hood ornaments.

There were plenty of familiar faces on and off the runway — from Bella Hadid (Wang’s BFF, who opened the show) to Kaia Gerber and Behati Prinsloo (who walked for the first time since welcoming her second child with husband Adam Levine), to Binx Walton, Lara Stone and more. The front row was equally as star-studded. Guests included Jourdan Dunn, Rosie Huntington-Whiteley, A$AP Ferg and Pusha T.

A model walks the runway in stars and stripes face paint at the Alexander Wang Collection 1 show  Image by: JP Yim/Getty Images