A look back at Riccardo Tisci's 12 years at Givenchy 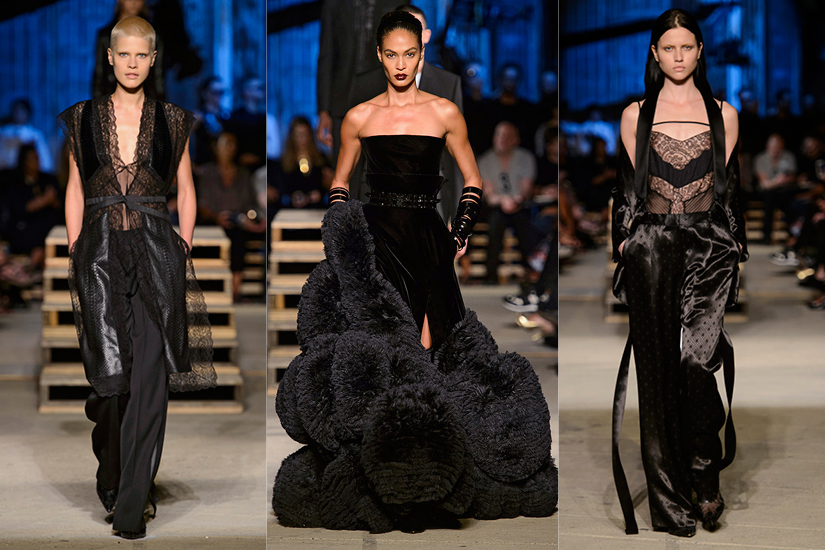 In 12 years at the helm of Givenchy, Riccardo Tisci took a sleepy fashion house and turned it into a relevant, subversive luxury label with plenty of celeb cred. Tisci, who took over the reigns from Julien Macdonald, went from a relatively unknown Central Saint Martins grad to one of the most famous names in fashion—admired by the mainstream and insider fashion circles. From his forward-thinking collaboration with Nike to the awe-inspiring New York runway show staged on the anniversary of 9/11, the designer’s shoes will be hard to fill. Here, we round up the highlights from his tenure.

Riccardo Tisci was appointed creative director of Givenchy thanks to the buzz surrounding his eponymous collection, which was briefly shown in Milan. The designer cast supermodel pals like Mariacarla Boscono in his debut show.

Tisci’s earliest efforts for the maison didn’t receive unanimous praise. But by the time Tisci showed his fall/winter 2007 show, he found his stride with a collection consisting of luxurious takes on naval uniforms.

For fall/winter 2010, Lily Donaldson modelled an asymmetric long sleeve tee embellished with feathers and ropes. It’s one of the many examples of Tisci’s ability to mix streetwear with Parisian high fashion.

For spring 2010, Tisci showed a nomadic, rock ’n’ roll lineup of wild prints to much acclaim. Celebrities like Zoe Saldana and Kanye West became some of the designer’s A-list fans.

Tisci cast Joan Smalls as an exclusive for his spring 2010 Haute Couture show, helping the model launch her runway career. Smalls continued to walk for Givenchy nearly every season.

Tisci’s love of gothic references permeated many of his collections, including the spring/summer 2011 show.

Tisci presented his fall/winter 2011 collection to a front row of celebs amid rumours that he would take over Dior after John Galliano’s departure. This collection displayed the designer’s talent for instantly recognizable kaleidoscopic prints.

At the fall 2011 menswear show, Tisci debuted his now-iconic snarling Rottweiler print, beloved by celebrities to this day.

Remember the infamous Bambi sweatshirt? The fashion world got its first look at the covetable design on the fall/winter 2013 runway. The rest of the collection was just as memorable, featuring crewneck sweaters layered over wispy sheer maxi skirts, and intricate folds of a certain floral print that Tisci would adapt to make his friend Kim Kardashian’s first Met Gala gown.

At the fall/winter 2014 show, the intarsia butterfly motif modelled by Jamie Bochert was a standout look. This was also Kendall Jenner’s first season walking for the designer.

Kim Kardashian was a big fan of the corsetry lace details seen on the spring 2015 runway and the look kicked off a slew of imitations.

For fall/winter 2015, Tisci presented a collection with a “Victorian chola girl” vibe. The models sported over-the-top face jewellery and septum rings, and though the clothes were beautiful, Tisci’s interpretation drew criticism for cultural appropriation.

The following season, Tisci moved the runway show from Paris to New York, and the presentation was a meditative and touching tribute to the events of 9/11.

Tisci final womenswear designs were tacked onto the end of his menswear presentation in January 2017, just 13 days before the designer announced his departure.

The British didn't come to play—from chic silhouettes to bright patterns, discover some of the coolest street style looks at LFW.