Liz Guber heads to Ukraine and finds that she has changed as much as her hometown. 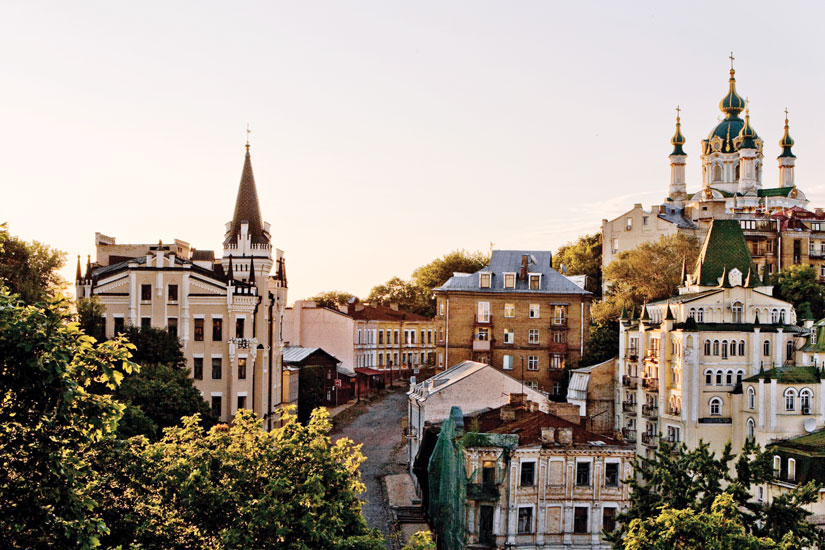 Kyiv, as Ukrainians like to spell the name of their capital city, isn’t a top travel destination for most people right now, but it is for me, and I’d like to think it’s not just because I was born there. This past summer, I went back to Kyiv for the first time in four years, and I was smitten with the city in a way that I’ve never been before.

I left Kyiv with my parents in 2001, when I was 10 years old. We immigrated to Canada for all the usual reasons, like the promise of stability. Although I quickly adapted to life in Toronto, the move gave me a new reality. Like many immigrant kids, I now speak a bilingual mash-up with my parents and I’ve formed unexpected habits, like putting Sriracha on my cabbage rolls – something that is unheard of in spice-averse Ukrainian cooking.

A vyshyvanka by Yuliya Magdych.

I’ve only been back to Kyiv six times since my move. My first visits were driven by homesickness. I flew home every summer and then every other summer. When I went back as an 11-year-old, I was struggling with my status in Canada as the new girl with weird clothes and no friends. At 19, I visited with a secret: I hadn’t yet told my parents I’d dropped out of university and wanted to pursue a career in fashion. This past summer, at 25, I went back feeling a little more grown-up, with a fashion-studies degree under my belt and the magazine job I’d always wanted.

While I felt more settled, Kyiv did not. Ukraine’s recent political clash with Russia over the annexation of the Crimean Peninsula in southern Ukraine has left the country, and its northern capital, scarred. Kyiv’s main square, Maidan, once the setting for my family’s weekend ice-cream outings, had since served as a makeshift campsite for protesters. As I walked through it this summer, I realized that although it looked the same – with its grand fountains and glossy shopping mall – it didn’t feel the same. A small homemade sign that read “Heroes never die,” posted near the square’s centre, was the only giveaway that there had been any upheaval there. Later, when I went back to see my first home, a typical no-frills soviet apartment in the leafy suburb of Obolon, I met the refugee family who was now living there. Instead of leaving the apartment empty after a family member no longer needed it, my aunt and uncle decided to offer it, free of charge, to a family who had fled the violence on the country’s southeastern border.

But before I could reacquaint myself more fully with the city, I was drawn to the biggest pull of all: the handful of relatives who make up my small but tight-knit Kyiv-based family.

At my babushka’s tapestry-draped flat, I smiled and nodded through an awkward, if well-intentioned, lecture, the translation of which goes something like this: “A woman’s childbearing ability is like a wilting flower.” I’m unmarried and childless, so professional triumphs didn’t impress her much. Then I gave my childhood cat, Moose, mellow from old age, an overdue cuddle. I’d left her with my grandmother the year I moved to Canada. Frankly, I was amazed that she’s still alive, surly as ever and ready to scowl at anyone, including me, who dares to approach.

Life keeps going for the people (and pets) you leave behind. Later, I met up with Vanja, the boy I used to rollerblade around the block with when he was 12 years old. He’s 30 now and married and has a young daughter. Seeing my childhood friend push a stroller around made me feel, for the first time, like my own life might be standing still.

I had another revelation. I used to feel a little embarrassed at the shabby state of the Stalin-era outer suburbs on the drive from the airport to Kyiv’s city centre, but not this time. I now have more places to compare it to – recent visits to Berlin, Tokyo and Sydney have made me realize that with grit comes character. And as I watch fellow Eastern European countries like Slovenia, Romania and Bulgaria begin to gain status as up-and-coming It-travel destinations, I now believe Kyiv is worthy of being on that list too.

In all my prior visits, I never truly realized how beautiful the city is. Yes, singing your hometown’s praises is akin to calling your child the cutest in the class (not that I would know, my babushka would point out), but the fifth-century capital is a jewel box of art-nouveau palaces, 100-year-old verdant parks and Orthodox churches painted in unreal shades of amethyst and saffron.

“Tell me this isn’t Paris,” said my mother one day during our visit as we reached the top of the 76-metre-high bell tower at Saint Sophia’s Cathedral. It looks like a wedding cake thanks to the white-plaster flourishes that cover its four milky-blue tiers. The 18th-century structure dominates the skyline and rewarded us with a 360-degree view of the city’s historic heart. In the square below, we could see the statuesque monument to the Cossack rebel Bogdan Khmelnitsky. Looking toward the Dnieper River, we spotted the golden pear-shaped domes of Saint Michael’s Monastery. We tried to figure out which way was north, but the city’s ancient streets don’t fit into a neat grid; they spread out like a web dotted with an eclectic mix of Stalinist and beaux-arts architecture.

Beneath the city lies another web – the metro – with its grand marble and mosaic stations complete with chandeliers and escalators so deep that you could read a page of a book on your way down. The metro hasn’t changed a bit since I was young – not the dusty smell of underground air or the robust sound of the automated stop announcements – but I turned down car rides during my trip so I could ride on the train’s vinyl benches with the enthusiasm of a kid on a roller coaster.

I reacquainted myself with my favourite spots, like Andrew’s Descent, a sloping street known for a vibrant craft market that extends down perilous cobblestones. Here, painted wooden eggs, folk embroidery and even bits of Soviet kitsch, like hammer-and-sickle pins and portraits of Lenin, are up for grabs. I discovered new ’hoods too, like the hipster-friendly Yaroslaviv Val Street, with its underground bars and street art, and Vozdvizhenka Street, a surreal, largely uninhabited stretch of bright, ornate buildings that riff on the neo-Renaissance styles of Old Kyiv. The buildings here are slowly filling up with cool shops, like Corner Concept Store, a boutique that carries clothes by Ukrainian designers. As I browsed, textural, street-smart wares by Elena Burenina and colourful, lighthearted pieces by Omelya Atelier caught my eye.

The view from Andrew’s Descent.

My Ukrainian fashion immersion continued when I popped into the ateliers of Kyiv-based designers with ELLE Ukraine’s editor-in-chief, Sonya Zabouga. A particular highlight was seeing the designs of Vita Kin and Yuliya Magdych, who are sparking desire worldwide for updated versions of vyshyvanky – Ukraine’s folk costume. These flowing linen blouses and dresses with balloon sleeves and opulent floral embroidery are selling out on sites like Net-a-Porter and Matches Fashion. Vita Kin just recently got her own website, but she mainly relies on an Instagram account to draw a fan base at home and internationally. “Ukrainian fashion has been on the rise now for the past few years, locally and abroad,” Zabouga tells me, explaining that 14 Ukrainian brands, including Poustovit, Litkovskaya, Ksenia Schnaider and Elenareva, set up showrooms or participated in trade shows at Paris Fashion Week in March.

Growing up in Kyiv, I only saw vyshyvanky in history textbooks or on waiters at gimmicky restaurants. So it’s both strange and delightful to see them become a bit of a global fashion craze. And it’s not just high-end vyshyvanky in punchy hues that are popular. I spotted fast-fashion versions in shop windows, and I even saw a few briefcase-toting men sporting the country’s traditional embroidery on their shirt plackets

This embrace of tradition goes beyond the sartorial. When I grabbed a ride from a friend, I spotted a black, red and white design that often decorates Ukrainian Easter eggs (or pysanky) on the side of his car. Driving through the city, I noticed that countless bridges, fences and lampposts were painted blue and yellow, the colours of the Ukrainian flag. My uncle explained that at the height of political tensions, residents grabbed buckets of paint and went rogue, even painting a cable-stayed roadway called the Moscow Bridge. Beyond that, I couldn’t get much else out of my family about the political situation without inciting a shouting match over differing opinions. Still, national pride is high – cool, even.

And that’s the other thing about Kyiv: The city that was once known for its excessive, borderline-tacky style (I saw lots of glittery leopard prints during my childhood) is emerging in a fresh light. Zabouga credits Ukrainian Fashion Week, as well as the Alfa Jazz Fest and the Odessa International Film Festival, for raising Ukraine’s profile worldwide in a cultural context, not just a political one. Although the diplomatic tensions are causing economic uncertainty, falling property prices in the city are making way for co-working spaces, night markets and vintage shops.

A look from Elenareva’s fall/winter 2016 collection.

There’s a luxe influx too. TSUM, once a lifeless, communist-era department store, is getting a high-end makeover. At last season’s Ukrainian Fashion Week in March, Natalia Kamenska and Olesya Kononova, the designers behind the eight-year-old label Lake, staged a runway show for their sculptural wares in TSUM’s hollowed-out under-construction interior. They gave attendees hard hats emblazoned with their label’s logo – a fitting symbol for the city’s disruptive metamorphosis. Even the street style reflects this shift; one day on Khreshchatyk, Kyiv’s main boulevard not far from Maidan, I spotted women in Miu Miu flatforms and sneakers instead of the vertiginous stilettos they used to wear.

Girls from Kyiv are called Kyivlanky, and on my last night in the city, as I packed Ukrainian fashion finds into my suitcase, I realized that although I can only claim part-time Kyivlanka status, it’s the reason for my sped-up speech pattern and why I’m usually just a little overdressed. My identity lies somewhere between where I’m from and where I’m going. I’m still figuring it out, and it turns out Kyiv is too.

The buy: A mohair dress with a satin corset.

Where to get it: Corner Concept Store, bevza.com.

Lilia Litkovskaya’s edgy and androgynous label is a street-style staple.

The buy: A reversible cocoon coat with silkscreen panels.

Where to get it: avenue32.com.

The buy: Flats with an obi tie.

Where to get it: notjustalabel.com/designer/lake.

3 OF THE WRITER’S FAVOURITE SPOTS IN KYIV

This 100-year-old market is the next-best thing to a Ukrainian grandmother’s cooking. Many a Ukrainian expat has attempted to sneak local staples like salo – buttery cuts of salted pork belly – past customs.

An impressive arch marks the entrance to this luxurious street (think Prada and Louis Vuitton), just off Kyiv’s main thoroughfare, Khreshchatyk. Book a table at Wolkonsky Café, where the city’s A-listers lunch.

Grab a scoop of ice cream and walk through the city’s oldest park. It’s home to an imperial residence built in 1755 and the equally-palatial-looking Puppet Theater, and it offers views of the Dnieper River.

Travel memoir: The power of pilgrimage