Your guide to São Paulo’s hot spots and fashionable addresses. 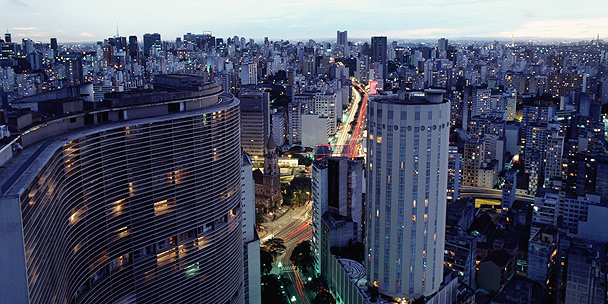 For an uptown scene…

In the city’s Jardins district, the well-heeled set get their ritzy retail fix on Rua Oscar Freire. Billed as the eighth most luxurious street in the world, this leafy avenue is home to international labels as well as Brazil’s top designers, such as Maria Bonita, Huis Clos, Osklen and Alexandre Herchcovitch. For shoes, go cheap ’n’ chic with a pair of plastic Vivienne Westwood Mary Janes from Melissa (
melissa.com.br) or flip-flops from Havaianas (
havaianas. com). On the side streets, you’ll find hidden gems like Surface to Air (
surfacetoair.com.br), which carries the best of Brazilian design (Neon, Oestudio and Adriana Degreas). At Adriana Barra (
adriana barra.com.br), the on-site chef serves watermelon coolers and fresh
pão de queijo (cheese rolls) while you browse through the quirky creative den. The designer is known for her vivid boho prints, dresses and decor.

The Baretto Bar at the under stated Fasano (
fasano.com.br) draws a discreet crowd attracted to its stylish
Mad Men vibe and live bossa nova.

The Lina Bo Bardi-designed Art Museum of São Paulo (
masp.art.br) is a must- stop for fans of Brazilian architecture. The brutalist-style concrete- and-glass box building is suspended in the air by four red pillars.

For a hipster haven check out the next page …

Travel Peru in luxury with this guide

For a hipster haven…

Leave the elite Jardins—with its concrete skyscrapers and jet-set helicopter landing pads—and head to Vila Madalena, São Paulo’s bohemian neighbourhood. Ronaldo Fraga (
ronaldofraga.com.br) is one of the first well-known designers to move into an area famous for its quirky boutiques, decor shops and open markets. Farm (
farmrio.com.br) is the trendsetter hot spot with its flirty, “notice me” beachwear. Antes de Paris (
antesdeparis.com.br) has minimal, biomorphic designs for the intellectual fashionista, and Maria Andrade (
mariaandrade.com.br) offers a colourful counterpoint with its whimsical cotton handbags.

By day, get your chocolate fix at O Melhor Bolo De Chocolate Do Mundo (
omelhorbolodechocolatedomundo.com). At night, Vila Madalena gets into its samba and bossa nova groove at Grazie A Dio (
grazieadio.com.br). The bobo boteco Bar Filial (barfilial.com.br) is the
de rigueur late-night destination for chopp (draft beer) and
croquetes de carne seca.

Graffiti is an artistic and poetic act—not a form of vandalism—in São Paulo. The narrow, twisting alleyways of Vila Madalena are street artists’ canvas of choice. A look from Ronaldo Fraga’s Pina Bausch-inspired collection; Farm, the beachwear den; graffiti-lined streets in Vila Madalenaare are street artists’ canvas of choice.

How to travel in luxury in Peru