From its boutique hotels to its delectable cuisine and fashion locales, Dublin is one happening city. 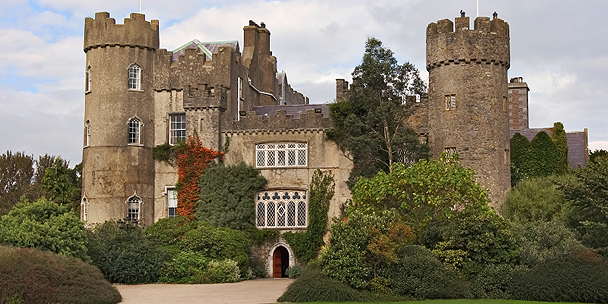 Where Dublin, Ireland’s capital, is located in the province of Leinster, at the mouth of the River Liffey, on Dublin Bay, an inlet of the Irish Sea. Its Irish name is Baile Átha Cliath, meaning "Town of the Ford of the Hurdles."

Your guide Marian Keyes, author of
The Other Side of the Story and
Sushi for Beginners. "When I moved back to Dublin from London, I was worried that I’d hate its small-town feel, but what I hadn’t realized was that while I’d been away it had become Groovyville. It’s now nearly impossible to buy a grand cup of tea because all that’s available is skinny, double mocha lattes."

The vibe "Beyond the urban, cocktail-drinking, expensive-handbag-carrying women, there’s still the old culture out there. I think we’re still far, far friendlier than London. The way we use language is also more colourful. I love how Irish people talk."

What to bring "Your umbrella! [The eastern half of the country gets between 750 and 1,000 millimetres of rain each year.] I dread the rain! It’s my hair I worry about," says Keyes, laughing. "Most Irish people don’t carry umbrellas-it’s considered a little wussy. We’re used to the rain. It’s like living next to a train station-eventually you don’t hear the trains." Irish rain lingo: "A ‘soft day’ is a gentle rain-the Evian mist of rainfalls."

Where to eat and hotspots on the next page …

After Dublin, why not take a trip to Scotland with this guide

Cuisine "For lovely, lovely, lovely French food, go to Restaurant Patrick Guilbaud in The Merrion. It’s fabulous and very romantic. For ‘modern’ Irish, The Tea Room at The Clarence, Halo at The Morrison or Thornton’s at The Fitzwilliam. They’re perfect for expensive, big-occasion glam! Shanahan’s on the Green is horrifically expensive, but the beef is amazing. I don’t drink, but after my meal I felt high! On the more affordable side, there’s French bistro at La Mère Zou, Asian fusion at Mao or traditional Irish at Eliza Blues."

Hangouts "Tourists love going to Temple Bar, but Irish people don’t go there," says Keyes. "There are pubs every two feet, and people are twisted at all times of the day. Locals go to places like Kehoe’s and The Brazen Head. If you make your way into the VIP section at Raynards, you might spot Colin Farrell, and there are plenty of ‘rides’ [handsome men] at places like Lillies Bordello. If you’re into vogue posing, head to Lobo at The Morrison. For the hip crowd, head to The Octagon Bar at The Clarence."

Boutique bedrooms "If you stay at The Merrion, you’re one lucky girl," says Keyes. "It’s gorgy!" The hotel, created from four restored Georgian townhouses, is located just down the street from St. Stephen’s Green and is one of five five-star hotels in Dublin. It also houses Ireland’s largest private art collection. The clientele are classy and monied and the staff are oh-so-discreet. The rooms are
so extravagant, you’ll be reluctant to venture outside — unless it’s to the hotel’s 18th-century-style gardens or their cozy spa.

"If you’d rather run into Bono than Colin, head to The Clarence," says Keyes. This 19th-century riverside hotel was a basic three-star establishment until U2’s Bono and The Edge purchased it and transformed it into an art-and-crafts oasis. Its Octagon Bar — -where U2 used to hang out before they became famous — attracts a mix of locals, rock stars and tony tourists. If you’re really flush, you can rent the penthouse, which is billed as the city’s most indulgent hotel room, for around $3,300 a night.

"Very trendy and very hip, The Morrison attracts a crowd that wants to see and be seen," says Keyes. Irish fashion designer John Rocha designed the minimal decor, creating a boutique gem with a modern New York City vibe. Plans are in the works to open a zen-like Japanese spa in summer 2005.

"At The Fitzwilliam Hotel, you’ll get a gorgeous view of St. Stephen’s Green and you’re close to all the shops on Grafton Street," says Keyes. One of Dublin’s first "designer hotels," it’s modern, yet cozy, without the so-hip-it-hurts attitude. It attracts a business crowd during the week, but urban sophisticates on the weekend.

Read more
Canada’s got style! Check out these hot spots

5 ways to lose weight on vacation