Take in the land of Nicholas Sparks movies and Katniss Everdeen's hunting grounds. 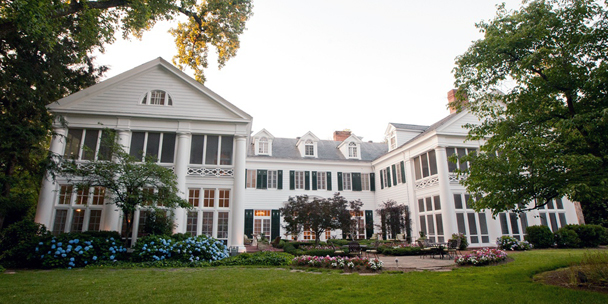 The Duke Mansion in Charlotte, N.C., doubles as the veep’s house in Homeland.

When you talk to the (endearingly friendly) folk in Wilmington (a.k.a. “Wilmywood”), N.C., about the area’s thriving television and movie scene, it’s hard to find a local who hasn’t been in one of the hundreds of shows and films made in this coastal city of 110,000. It seems like everyone from waitresses in the local coffee shop to college students can reel off their extra credits. (Although most anecdotes seem to end on the cutting-room floor.)

Local-entertainment talk-show host George Peroulas was an extra when The Hunger Games: Catching Fire was filmed in Charlotte, and he told me how he and the other extras would cross the street from hair and makeup through a tunnel “so no one would see our crazy costumes, which included a pair of David Bowie’s boots.” The local paper, the Star News, even has a column on Sundays listing what’s filming there at the moment, in case the blocked-off streets and trailers around town aren’t obvious enough.

And it’s not just Wilmington. The state landscape — mountains in the west, beaches in the east and battlefields, plantations and Rockwell-esque towns in between — has been the backdrop for hundreds of films and TV shows, ranging from Iron Man 3 and The Hunger Games to Homeland and Sleepy Hollow.

But the North Carolina landscapes that may be most beloved are those from Dawson’s Creek and One Tree Hill, which, for 15 years between them, provided viewers with an ongoing diet of teen melodrama and locals with celeb sightings and steady work. It has been years since the shows went off the air, but tourists from across the world (Germans and Australians are particularly fanatical, apparently) still come to town in search of locations like One Tree Hill’s River Court (gone now) and the actual Dawson’s Creek (really named Bradley Creek, accessible via the historic Airlie Gardens).

MY DAY AS A NICHOLAS SPARKS HEROINE

As the sun set over the harbour and the long streaks of red on the water mirrored the drips of chocolate ice cream running down the cone in my hand, I felt happy in the way that people are at the end of a romantic novel. In many ways, my entire day felt ripped straight from the pages of a Nicholas Sparks novel — which it kind of was.

Southport, N.C., the tiny town in which I spent this perfect day, was the filming location for Sparks’ novel turned romantic blockbuster Safe Haven, starring Julianne Hough and Josh Duhamel. I sipped drinks at the bar where Hough’s character worked (Old American Fish Co., a.k.a. “Ivan’s”), ate life-changing crab dip at one of Duhamel’s favourite restaurants (Fishy Fishy; he always ordered the Brunswick clams) and strolled down the boardwalk where the last scene of another Sparks classic, A Walk to Remember, was filmed (sob, sob).

I even had my own little brush with the necessary Sparksian tragedy, contemplating death among the salt-eroded stones of the town’s historic graveyard — although the closest I came to heartbreak was when I couldn’t find the grave of an incredibly tall man apparently buried there.

But the moment when I transcended set-jetting and actually felt like a Sparks heroine myself came toward the end of the afternoon. Wearing high-waisted shorts not unlike Allie’s in The Notebook, I found myself pedalling an old-school bike through the town’s leafy streets, whizzing by gracious old homes with swings on the porch and crape myrtle in the garden. If a (shirtless) Ryan Gosling had stepped out from behind the historic courthouse and confessed passionate love, I’d hardly have batted an eyelash. (Although I would have told him I was on my way for a cone at Flava’s Ice Cream Shop and could we talk later?)

And, even better, this story could have a sequel! The town and other locations in North Carolina are the backdrop for The Longest Ride, yet another Sparks movie, currently being filmed. I’ll be waiting for the casting agent’s call….

Sleep where the stars slept
Slumber in vice-presidential style at the magnificent Duke Mansion in Charlotte, which doubles as the veep’s house in Homeland.

Amélie’s French Bakery in Charlotte
When Katniss is gorging herself on goodies en route to the capitol in The Hunger Games: Catching Fire, there’s a good chance they’re from this super-cute french bakery, which supplied the film. The salted-caramel brownies are totally worth fighting to the death for.

The Brown Dog Coffee Company in Burgaw
When crews for tv shows like Under the Dome and Revolution are filming in this sleepy North Carolina town, this coffee shop is caffeine-fix central — and perfect for incognito star spotting.

Tour the sets
Stroll by Karen’s Café and peek in the window of Clothes Over Bros (One Tree Hill fans know what I’m talking about) on the Hollywood Location Tour of Old Wilmington. Take a self-guided four-day Hunger Games road trip to filming sites across the state (visitnc. com). Wander through a working set (like the diner from Under the Dome) on a guided tour of EUE/Screen Gems studios.

SCENE SCENT: Match your travel to your fragrance
According to Hollywood makeup artist Vivian Baker (she just wrapped next summer’s mega-release Jurassic World in Baton Rouge, La.), many actresses select a new fragrance to go with each film they work on. They often use the scent to help get into character or just as a way to remember the on-set experience. Why not pick a new perfume to complement your next vacay? Here are two recommended pairings for set-jetting adventures in Iceland and North Carolina:

North Carolina: Clinique Calyx Eau de Parfum Spray ($82 for 100 ml, at Hudson’s Bay and Sears): Green leaf, grapefruit and rosy sweetness are swirled together to in a crisp yet dreamy scent — perfect for makeout sessions in the dewy grass.

Perfume pairings for your dream job