Luxury travel guide: Exploring the finer side of life in France 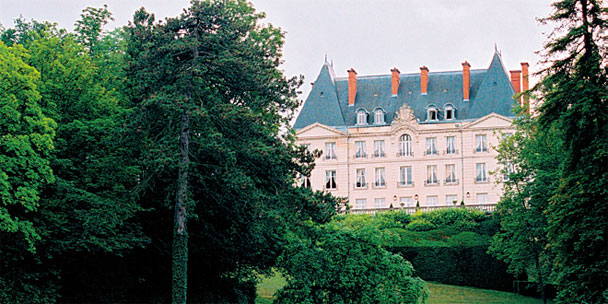 I’ve been to the French Open once before. On a chilly May weekend in 2005, my two friends and I arrived early in the morning and stood in line for two hours to buy the cheapest tickets – valid for the "outside courts only."

Through the jostling crowds, we made our way around the grounds, lunched on tea and muffins from the concession stands and watched games between players we’d never heard of. And we thought it was all pretty great.

Luxury travel arrival
Cut to 2012: I’m back at the French Open. This time I arrive around midday as a guest of Moët & Chandon, a brand that has been associated with the Grand Slam tournament for the past 10 years. I’m led past the long queues, straight to Le Village – an exclusive area where corporate sponsors spoil guests in private lounges.

Small, chic groups sporting Ray-Bans and Mulberry bags mingle on a wooden boardwalk, while attractive staff in Zara uniforms make sure that everyone’s needs are met.

At the far end of the village is the Moët sanctuary: The champagne is flowing from the moment we arrive, and, not long after, we sit down to a lunch of ceviche, French bread and florentines. This is a very different experience. After lunch, I’m free to attend any game I like, but it’s so lovely sitting in the sun with my bubbly that I decide to relax on the terrace outside the lounge until it’s Roddick time.

At the appointed hour, a young Parisienne with a headset escorts me to the Moët box on one of the main courts; I have a perfect view of the American tennis star (close enough to snap surreptitious pictures and see the sweat beads on his handsome face). It’s Andy Roddick vs. local favourite Nicolas Mahut, and the stands are packed – some people are even standing on the steps of the stadium to get a look.

The 88th-ranked Frenchman wins the first and second sets fairly easily, and I can feel the crowd’s energy intensify – especially as Roddick argues a call (unsuccessfully) with the ref. As Roddick throws his head back in despair, I prepare myself for an upset. By the final game, Mahut has broken Roddick’s serve seven times and even I am rooting for him.

Champagne luxury travel guide
The next day, I top off my sporty adventure with a visit to the Moët & Chandon HQ, which is located on Avenue de Champagne, the most expensive street in the world. There’s no shortage of gold leaf and wrought iron on this wide avenue in Épernay, a pretty town 130 kilometres east of Paris.

A statue of Dom Pérignon, the 17th-century monk credited with devising many of the processes still used in the making of the sparkling wine, stands outside the grand building, which was built in 1793 by the company’s founder, Jean-Rémy Moët.

Inside, Pierre-Louis Araud, my guide, leads me past hundreds of bottles of bubbly on display and down to the cellars. I’m intrigued to explore even part of the 28 kilometres of tunnels – dug out of the town’s chalky foundation – which are home to millions of bottles of Moët. (There are over 100 kilometres of tunnels underneath Épernay for all the champagne houses – which is why the street is so valuable.)

The house keeps at least one bottle from each year, some dating as far back as 1892 (still drinkable, apparently). But before we enter the tunnels, we stop in a cool, cavelike room to receive a short tutorial on champagne and then, more important, taste it – specifically, the house’s iconic Impérial and a 2002 Vintage. Araud gives an eloquent explanation of what distinguishes the 2002 Vintage from the Impérial, but I forget most of it as soon as the aroma hits my nose.

The taste is even better: Slightly sweet and fruity, its superiority is evident even to a neophyte like me. My brief immersion in la belle vie culminates in a stay at Château de Saran, the Moët maison, built in the 1840s and now an invite-only guest house-cum-castle. It’s a balmy evening, and I sit outside and sip champagne on the terrace as if this is something I do every day.

I’m happy to set my glass down when I’m invited for a ride in Moët’s champagne-cork-shaped balloon. It’s my first time in a hot-air balloon, and it’s both exhilarating and tranquil. It’s confirmed: Champagne and high adventure are the most natural pairing in the world.

Horse sports in England
Polo is known as "the sport of kings" for a reason. If there’s any doubt, just consider its fans: It’s said to be Prince Charles’ favourite sport (he first caught Camilla’s eye while competing in a match), and princes William and Harry have been known to play while the Duchess of Cambridge looks on.

Fashion royalty Ralph Lauren even named his brand after the sport, and Argentinian Nacho Figueras, one of the world’s top players, has been fronting Lauren’s advertising campaigns since 2000.

Hit the Veuve Clicquot Gold Cup (a.k.a. the British Open Championships) on July 21, 2013, and make it the quintessential English day out with a luxury package that includes champagne and canapés, lunch with wine and afternoon tea ($600, cowdraypolo.co.uk).

Tennis in France
The annual French Open Grand Slam tournament (May 26 to June 9, 2013), held on the outskirts of Paris, attracts the likes of Beyoncé, Pippa Middleton, Anna Wintour and plenty of other fashionable faces.

And though you may not have the opportunity to attend as a guest of Moët & Chandon, you can still do it in style with the Avantage Lounge experience: Starting from $890 a day, this hot ticket includes access via a special entrance (no lineups), a private lounge (including open bar and catering) and the best seats (perfect view of Roger Federer), among other exclusive extras (rolandgarros.com; email [email protected] for Avantage and other packages).

Sail on
The Louis Vuitton America’s Cup (July 4 to September 1, 2013) draws sailing fans from around the world. (Keep an eye out for Richard Branson on his super-yacht, Necker Belle.) But you don’t need to know your starboard from your port to join in the posh fun.

Taking place this year in San Francisco, the event has over 160 years of history behind it, and its prize – the cup – is the world’s oldest sporting trophy still in use.

Get close to the action (boats reach speeds of around 75 kilometres per hour) by renting your own vessel, and try to catch sight of the Louis Vuitton sail. Charter companies offer anything from a small rigid inflatable boat (RIB ) to a mega-yacht – prices for these are astronomical, but is there a dreamier way to see the race?

The beautiful game
Start practising your WAG pout now, as it’s only a year and a half until the World Cup takes place in Brazil (June 12 to July 13, 2014). The "marvellous city," as Rio de Janeiro is known, is already a hot travel destination, but it will only get hotter in 2014 and then in 2016, when the Summer Olympics arrive.

Whether or not you’re rooting for Brazil, World Cup category-one seats (along with extras such as bar service and snacks) start at $700, but the most exclusive ticket packages offer a private suite just behind your seats – perfect if you’ve got a spare $100,000 burning a hole in your pocket. And you might just find yourself next to the Beckhams (hospitality.fifa.com).