Afghan artisans collab with a Canadian designer on a vibrant handcrafted collection. 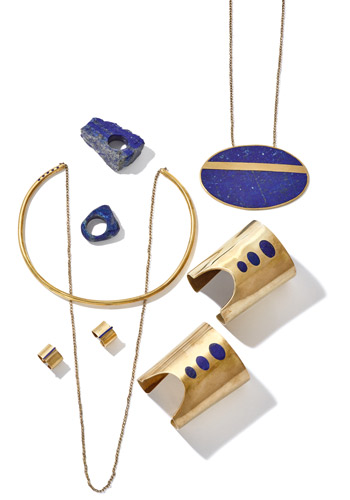 Thanks to a recent trip to Afghanistan, Toronto-based jewellery designer Kara Hamilton has deepened her understanding of “handmade.” Her previous starting point with “raw materials” was machine-made wire. But in August, she visited Kabul’s Turquoise Mountain, a trust founded in 2006 to preserve and teach traditional Afghan crafts.

While working with recent graduates of the non-profit’s Institute for Afghan Arts and Architecture, she learned that the jewellery artisans “hand-pull” metal wires and then crimp them into intricate chains – “they physically yank the metal through a tiny hole to reach a desired thickness and then pull it for miles and miles,” says Hamilton. But even before that, the artisans melt down the raw metals using alchemy techniques. “Because of variations in the artisans’ source ma­terials, their bronze is very gold in col­our,” she says of the Afghan metal mix used for the resulting collaboration.

Hedvig Alexander, of Toronto-based Far & Wide Collective, brought the designer and the artisans together. As the founder of the two-and-a-half-year-old social enterprise, she thought that the project was a perfect way to further her fair-trade business’ objective of connecting artisans in emerging economies to the inter­national market. (All Far & Wide rev­enues are re­invested into these efforts.)

“We are committed to working with artisans who don’t yet have a market to sell their goods,” says Alexander of the four small businesses that she chose to work on this col­lection. Each is made up of recent Turquoise Mountain Institute graduates operating out of the institute’s business incubator – and she has given three of the four businesses their inaug­ural order.

Far & Wide already carries lattice-wood trays and jewellery by Turquoise Mountain – Alexander ran the organization for two years during the seven years she lived in Afghanistan – but this is the first time it has undertaken a designed-from-scratch jewellery collaboration.

MUST READ: ELLE World: Oliberté is on a quest for happy feet and happy workers

“It’s hard for a relatively new jewel­ler to make a prototype for a complicated piece, and there has been a learning curve on our side too,” says Alexander, who had to wait through several rounds of designs before she could price the 12-item collection.

Hamilton, likewise, had to learn how to work with lapis lazuli, a semi-precious stone that is mined in Afghanistan. The artisans advised her that the ultramarine stones can break easily if they are not secured in a metal setting, so they adjusted the designs. And the artisans, who Hamilton says were crafting pieces so precisely that they almost looked machine made, got a lesson in the art of perfectly imperfect design.

“There were a couple of times I intervened in the hand-making process and said ‘Wait, stop’ because I wanted to see their hand touches in the pieces,” she says. “We had to find a balance between consist­ency and an understanding that what makes a piece unique is seeing someone’s fingerprints in it.”

This was the first time three of the four businesses had ever worked with an outside designer, says Maryam Omar, Turquoise Mountain’s sales and design officer, who acts as a liaison for international designers and clients. Omar, who returned to Kabul in 2012 after studying at the London College of Fashion, helps every­one communicate­, literally and fig­uratively translating design sketches and assessing quality control. “There were some  misinterpretations as we worked,” she tells me via a Skype call. “But it was a very good learning experience to make prototypes.”

“It is very challenging to work in Afghanistan,” continues Omar, citing outside factors like limited inter­national shipping options as just one example. “These orders have provided not only jobs for these artisans but also great training for these very young businesses where many [of the owners and employees] are women. Jewellery making is one of the sectors that women feel comfortable working in as it is culturally acceptable.”

Back in Toronto, Hamilton now thinks of the project and her trip to Afghanistan as a “justification for why I do what I do,” she says. “I know instinctively that craft and art and design are essential parts of life. But that became so much clearer to me when I was there – seeing that there is this currency to beauty, really.”

This is something that Alexander fundamentally understands too. Earlier this year, she launched artisantoolkit.org, a free illustrated business-training manual to help Afghan artisans. And she’s already planning Far & Wide’s next collab with Turquoise Mountain and another Canadian jewellery designer, Jenny Bird.

“It’s so interesting, because Kara’s initial drawings are so far from what we ended up with,” says Alexander. “Afghanistan has a cool factor to it and a beauty that you don’t necessarily see. The final collection has a bit of a rough edge, but that reflects what it is—the design conversation throughout the process took it where it was supposed to go.”