Sabrina Natasha Premji had the ELLE Impact Canadian jury members’ attention the moment she started her five-minute presentation on Kidogo, a childcare initiative she launched in the poorest slums of East Africa. 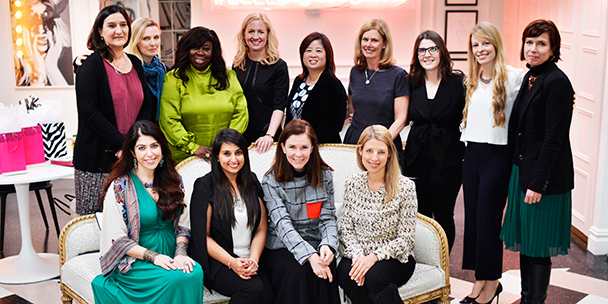 Sabrina Premji and Noreen Flanagan, seated, front centre, in the ELLE Canada closet with members of the ELLE Impact2 Canadian jury and the other award finalists.

Sabrina Premji had the ELLE Impact2 Canadian jury members’ attention the moment she started her five-minute presentation on Kidogo, a childcare initiative she launched in the poorest slums of East Africa.

“I was working with the Aga Khan Development Network and was invited to see a ‘baby care centre’ in Mlolongo, a slum just outside of Nairobi, Kenya,” explained Premji. “Mothers living in slums have three options for daycare: They can leave their children as young as two years old home alone, entrust the care to an older sibling who is pulled from school or drop them off at one of these unlicensed baby care centres at a nominal fee. I remember us walking down a winding muddy alleyway to an unmarked property. Before entering the darkened room, I was overwhelmed by the smell of urine and feces. I removed my shoes and made my way into the dark space. Suddenly my foot hit something; when I looked down, I realized it was a baby.

“Once my eyes got adjusted to the darkness, I could see there were 15 to 25 babies in this small room. They were all lying there awake, yet I heard nothing but silence. Many were given sleeping pills to hush them, others learned that crying did them no good. After leaving the slum, I was so sad by what I saw but I was also enraged that something like this could exist. It was in that moment that my co-founder, Afzal Habib, and I asked ourselves ‘can we provide a higher-quality childcare option for roughly the same price that mothers were already paying at the informal baby cares centres?’ That was the birthplace of Kidogo.”

So what is Kidogo? It’s a sustainable and scalable business model that involves building best practice Early Childhood Centres, or “hubs,” where children age 6 months to 6 years are provided quality care and education for less than $1 a day. This is combined with a micro-franchising program for local “mamapreneurs” to open their own childcare “spokes,” or mini daycare centres, in their homes; these are supported – and monitored – by the hub. “It takes around $5,000 in grant funding to set up each of the hubs, and through childcare fees alone, they are designed to be self-supporting within three to six months of operation. Sustainability is a key pillar of how we operate.”

Kidogo is still in its early days, but through its two hubs and five mamapreneurs, it’s already giving over 200 hundred children living in slums the best start to life, particularly during their first five crucial years of life, when 85% of brain development takes place. “The impact spreads beyond the children,” she said. “Now mothers are able to work knowing their children are safe, older kids don’t have to be taken out of school to care for their younger siblings, and local mamapreneurs have a steady source of income. It’s a fresh start for the entire community. We’re hoping this model can be replicated to other low-income communities around the world because every child, no matter where they’re born, deserves the opportunity to reach their full potential.”

Sabrina Premji is a social entrepreneur and global health practitioner who leads Kidogo’s Strategy, Partnerships & Impact. Prior to co-founding Kidogo, Sabrina spent four years working with the Aga Khan Development Network in Kenya and Tanzania, where she managed an Integrated Primary Health Care Start-Up Project, led the Social Innovation portfolio of a $13.5M maternal and child health grant and explored eHealth and community midwife franchising initiatives to curb the high maternal, neonatal and child mortality rates in East Africa. She is currently pursuing a Master of Public Administration in Development Practice at Columbia University in New York City and working with the United Nations Sustainable Development Solutions Network to promote a child-integrated approach in the post-2015 global agenda. She and her co-founder, Afzal Habib, were also chosen for this year’s prestigious Echoing Green Fellowship.