ELLE Travel: The magic of Colombia 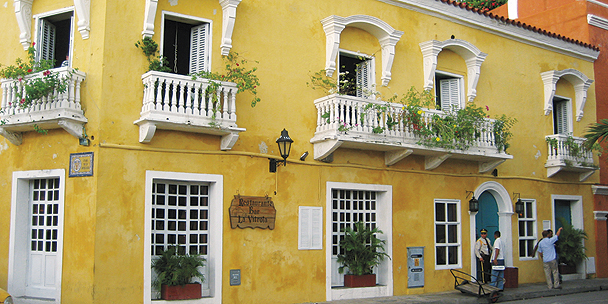 Mention that you’re planning a trip to Colombia and the first question you’ll likely be asked is “Why?” A discussion of gun-toting Marxist guerrillas, drug lords and kidnappings usually follows. What isn’t mentioned — at least, at first — is that this South American country is home to some of the world’s pop-culture, art and literary icons, from the original soap opera heroine Ugly Betty and hip-shaking sensation Shakira to renowned artist Fernando Botero and novelist Gabriel García Márquez.

Colombia’s geography is equally dazzling, with its Andean mountain ranges, Caribbean and Pacific coastlines and Amazonian rainforests. If that’s not enough, there are the country’s dazzling emeralds and famous coffee. To downplay Colombia’s negative press and showcase more of its charms, the government launched a “Colombia is passion” campaign in 2005. “Passion is the driving force behind everything Colombians do in life,” explains Rodolfo Móseres-Dieppa, the Toronto-based consul and trade commissioner for Colombia. “It’s a source of our unique intensity, creativity and resourcefulness.”

Cartagena
The scene Located on the Caribbean coast, the walled section of the city — which was designated a UNESCO World Heritage Site — was founded in 1533 by Pedro de Heredia on the site of the Carib Indian settlement of Calamari. You can spend hours wandering through a maze of cobbled alleys framed by bougainvillea-lined balconies and fashionable shops and cafés. The streets are filled with pedestrians and horse-drawn carriages.

The vibe “Cartagena is a romantic, mysterious and magical city,” says fashion designer Beatriz Camacho. “This is a city that you will never forget. I believe that the magic is between the walls because it is everywhere. It’s difficult to express — it’s just something you feel.”

Where to stay Located in the historic district, Hotel Charleston Cartagena dates back to the 17th century, when it was a convent. A stylish sense of serenity and calm remains today — especially if you indulge in a signature Colombian coffee body wrap in the hotel’s spa. Catch a stunning view of the city’s historic skyline from the rooftop pool. (For breakfast, head to the poolside café and order an arepa de huevo. This deep-fried cornmeal patty is stuffed with egg and ground beef.)

Where to dine
• La Vitrola An Italian name but a Havana theme, right down to the live Cuban music and mojitos.
• Club Pesca A romantic seaside setting that attracts officers and gentlemen from the Colombian admiralty.
• 8-18 Nouvelle cuisine in a resto that would be quite at home in Toronto or New York. The coconut rice and stuffed patacones (fried plantains) are simply irresistible.
• Café del Mar Known for its hipster scene and views of the sea, it’s ideal for after-dinner drinks.

Image courtesy of Noreen FlanaganMystery woman
Beatriz Camacho is on a mission to fend off the flashy Miami influence that has infiltrated her city’s fashion scene. “There’s this pressure to look like a South Beach girl, but my girl is natural and free,” she says. “Like this magical place, one’s fashion sensibility should have a touch of mystery. ” Scanning her store, which is located in the old walled city, Camacho points to the blues and corals in her fabrics. “The sea is always quietly on my mind,” she says. “Its colours breathe optimism and life into my designs.”

Gem dandy
In matters of the heart, a diamond may symbolize eternal love, while an emerald signifies one’s undying loyalty, explains Bogotá-based jeweller Juan Carlos Díaz Fleing.
• Rock talk “Vivid or deep leafy-green gems are the most expensive,” says Díaz Fleing. “Because emeralds are porous and prone to inclusions, it is accepted practice for the stones to be treated with colourless cedarwood oil to enhance their colour and mask the inclusions.”
• Shop talk
Unscrupulous dealers may use a cheap palm resin called “palma oil,” which leaches from the stone and turns a milky-white colour within months. “Buy gems from jewellers who are recommended by reputable sources,” warns Díaz Fleing.

Bogotá
The scene If you arrive on any day but Sunday, the roadways in this city of seven million are bustling with yellow cabs, tinted SUVs and TransMilenio public buses. But on Sunday, the main streets are closed and bicycle-mad Bogotános have the run of the place. That’s the perfect day to tour the famous Plaza de Bolívar, which is the heart of the original town. From there, you can walk through the colonial barrio of La Candelaria and visit one of more than 50 museums, including the world-famous Museo del Oro (Gold Museum). Don’t miss the Donación Botero, which houses 123 of the artist’s roly-poly masterpieces.

The vibe “Bogotá is 2,600 metres closer to the stars, which makes it a lot more vibrant,” says fashion designer María Luisa Ortíz. “Its diversity is inspiring. When you wake up in the morning and see those gorgeous mountains, you feel alive.”

Where to stay Politicos, business tycoons and tony tourists make their way to Casa Medina. Located in North Bogotá, this discreet hotel was built in the ’40s and showcases a mix of classic Spanish and French influences. Rooms at the back are especially quiet and have dazzling views of the looming Monserrate mountains. Don’t miss the hotel’s fruit plate, with sweet grenadilla, pitaya and curuba.

Image courtesy of Beatriz Camacho
Where to dine
• Andrés Carne de Res
• Criterión This French restaurant is a hideaway for well-heeled locals.
• Harry’s Bar This hot spot attracts a fashionable young crowd that wants to see and be seen.

Getting there Air Canada flies from Toronto to Bogotá three times a week. Fly between cities in Colombia on Avianca.

Bogotá’s beau monde
Rebel, rebel “Magic realism” is a term often associated with film and fiction, but Bogotá-based designer Olga Piedrahita brings the same fantastical and mystical elements to her fashion. One of the country’s most revered designers, the former artist and dancer is known for her intellectual and avant-garde designs. “Every time I work on a collection, I first rid myself of any preconceptions and throw myself into an abyss,” she says. “It’s the only way to achieve creative lightness.” Piedrahita aims to create illusions and shatter others with her work. “I’ve tried to liberate women from any concepts of elegance created by men.“

Pink lady A few doors down from Piedrahita’s studio is designer María Luisa Ortíz’s atelier. Their boutiques are located in the heart of La Zona Rosa, an area known for its fashionable shops and nightclubs. Ortíz’s mother was one of Colombia’s first fashion designers. “I used to hang out in her atelier when I was a child,” she recalls. “She died when I was 18, and I was too young and inexperienced to run her business. I left for Paris, where I studied fashion and interned at Christian Lacroix. Now that was magic — real magic!” After a short stop in Los Angeles, Ortíz returned to Colombia in 1995 and started sewing dresses in her father’s dining room until she was able to open her shop. Her work has a nostalgic sensibility and femininity to it. “My muses are from the ’30s to the ’60s,” explains Ortíz, “from Madame Vionette to Wallis Simpson to Elizabeth Taylor in Cat on a Hot Tin Roof.” While her influences are largely European, Ortíz says that her designs are influenced by Colombia’s struggles. “I try to bring colour — especially pink — to my collections,” she explains. “I use colour to show optimism for my country.”