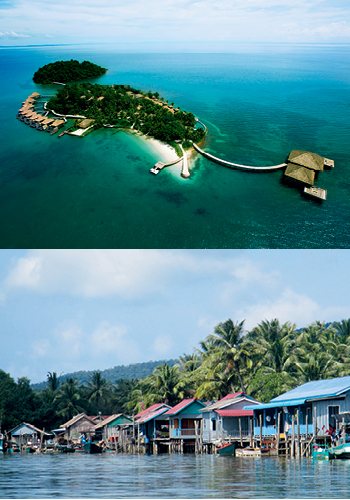 Song Saa Private Island (top) works with the nearby fishing village of Prek Svay (below) through its non-profit Song Saa Foundation.

Leave it to a former “organic stylist” – who once created exotic natural backdrops for fashion photo shoots – to transform a rundown and overgrown fishermen’s outpost into a rustic-luxe private resort with its own charitable foundation and Cambodia’s first marine reserve.

Yet nine years ago, even the idea wasn’t in the Hunters’ – Melita, the stylist, and Rory, a former advertising exec­utive – wildest dreams. At the time, the Australian-expat couple had been living in Cambodia for several years. While they were renovating and renting out French Colonial houses, they heard a rumour about an area off the coast of Sihanoukville, the country’s main port town, that suppos­edly had incredible white beaches – and not many foreigners or tourists.

Determined to see it for themselves, they hired a fishing boat and set out on a two-week excursion to check out Koh Rong, Cambodia’s second-largest island – with few inhabitants and just four modest villages – as well as some surrounding islets. On their first day out, the Hunters landed at a set of small islets that were being used as a fishing outpost.

“It wasn’t beautiful by any means,” says Melita. But the moment they stepped onto the h footprint-free powdery-white-sand beach, “it was a feeling of euphoria,” she says. That same day, a man named Vut, who was the head of the 65-person fishing village, came over to talk and asked, “Would you like to buy my islands?” The couple was a bit taken aback by the offer, “but we said yes immediately,” says Melita, and they made a deal to buy the islets from the villagers.

The Hunters moved to the bigger of the two islands to camp out and begin cleaning up decades worth of fishing nets – with the dream of one day opening a resort. They hired the former villagers as well as locals from Prek Svay on Koh Rong, a local fishing village just a five-minute boat ride away.

Fast-forward through six years of planning, building and personal setbacks – during this time, Melita was diagnosed with (and overcame) cancer – and the twin-island resort, now called Song Saa, which is Khmer for “the sweethearts,” finally opened in 2012.

Just 27 immaculate rustic-modern villas, each with its own plunge pool, are carefully tucked into the lush vege­tation on the main island, so it never feels crowded. Dinners are kept private at carefully spaced locations – one might be invited to a candlelit Kampot-pepper-infused seafood spread on the beach or a table set up in the shallow end of the main pool – where local Khmer dishes are served while you soak your feet.

Private guided activities are also popular, such as kayak trips up a mangrove-lined river on Koh Rong and snorkelling excursions around man-made reefs that were added to restore and protect the marine life. The Hunters worked to have the archipelago area declared the country’s first marine reserve. The resort’s non-profit Song Saa Foundation is now working to have it upgraded to a marine-protected area.

As part of the clean-up efforts, the Hunters went to local fishing villages and paid the communities for the right to remove their old (but wonderfully coloured) boats – which not only helped clean up the shorelines but also provided easy access to building materials in a remote region. The turquoise, blue and white deck at Song Saa’s spa is crafted from this reclaimed wood.

The Hunters have taken special care to not only protect the environment but also help its local people, who are still facing many challenges following decades of war. Close to 20 percent of the resort’s staff are from Prek Svay, and the foundation is working closely with local leaders to provide a variety of support to the community.

“We talk to locals and ask ‘What do you need?’” says Ben Thorne, the foundation’s project director. So far, villagers have received help setting up a waste-reclamation system; assistance accessing much-needed medical care through International Medical Relief, which includes a vitamin distribution program; as well as educational guidance, seeds and supplies to plant dozens of vegetable gardens in an effort to improve nutrition and diversify an economy where 80 percent of residents rely on fishing to get by.

“We opened this resort with a belief and hope that Cambodia would sort itself out,” says Rory. “We want people to see that there is more to this country than the Khmer Rouge and Angkor Wat.”

SPACE WALK I was a little apprehensive to try underwater meditation. At night. In the ocean. Wearing a weight belt. And using a scuba breathing apparatus that I’d never tried before.

Thankfully, the resort’s yoga teacher prepped me with a guided breathing exercise to help slow my heart rate before I went under. With the reassurance that I would only be in shallow water just metres from shore and have a dive master carefully watching over me, I let myself sink to the sandy bottom where I began to breathe in (one, two, three, four) and out (one, two, three, four).

I let my arms and legs float freely, and because the water was virtually the same temperature as my skin, I could hardly sense them at all. It felt like I was drifting in space. As I swirled the water with my arms, what looked like gal­axies of tiny sparkly stars began to appear – phosphorescent plankton that came from a nearby mangrove forest.

To top it off, I could also see the almost-full moon glowing above the water’s surface. Though I couldn’t see the real stars, I knew they were out there. Can an earthbound person really sense what it’s like to float in space? I certainly felt like I was light years away.

SOAK IT IN Return to your villa after dinner to find your two-person tub laid out for the Stillness Bath Ritual. Candles, flower petals and pots of lavender oil and coconut milk await. Just add water.

DREAM BIG Book the signature Blessing Night Spa Ritual, a series of scrubs, soaks, massages and poultice treatments that together make for the ultimate journey to sleep.

MUST-SEE: You can’t go to Cambodia and not see Angkor Wat.

Angkor Wat is one of the largest and most unusual temple complexes in the world – and it’s even more incredible to take in during (and after) an afternoon rainstorm. As I explored the temple of Ta Prohm, just one example of the Khmer architecture that spreads out over 400 square kilometres, the hot, heavy and humid skies burst almost instantaneously with big, warm raindrops.

Other visitors quickly disappeared beneath passageways and huddled below some of the gigantic silk-cotton trees that have famously grown into (and in many cases taken over) the sandstone walls that date back to the 12th century. When the rain started, I happened to be standing at one of the most famous tree-wall fusion points (a spot featured prominently in Lara Croft: Tomb Raider), and I suddenly had it almost all to myself – which was especially lucky since I visited on the last day of a busy two-week-long holy festival.

As the rain shower sent sweet drops down my shoulders and back, I soaked in the fusion of man- and nature-made magnificence (like a carved rock face perfectly surrounded by a curving tree trunk). As quickly as it came, the rain was gone. Distinct sunrays began to split the clouds and light up the water-soaked ruins, bringing out the intensity of the green mosses that coat many of the crumbling stones and lending an extra sense of peace to a site that has been a continuous place of worship for hundreds of years.

STAY Originally built in the 1930s, the Raffles Grand Hotel d’Angkor in Siem Reap is just a 10-minute drive from the temple. Book one of the pool villas—each has a private patio that opens onto a lush courtyard with an expansive swimming pool. Take an evening dip and inhale the scent of the surrounding frangipani trees.

HOW TO FOLD A LOTUS FLOWER

READ MORE
Be still: How to experience the unexpected zen of a staycation
Travel Memoir: The power of pilgrimage
A private island escape to Jumby Bay, Antigua