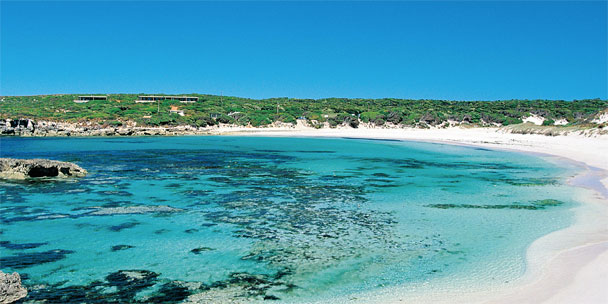 Koalas have the best breath: minty menthol mixed with a hint of sweet pine. It’s the happy result of eating eucalyptus leaves for pretty much all of their waking hours. I discovered this when I held a young fuzzy grey koala named Jack as he chomped on pale-green baby-gum-tree leaves right under my nose. I met Jack at the Cleland Wildlife Park, an animal reserve 20 minutes outside of Adelaide,
Australia.

Jack, like most of the koalas that live here, was rescued. He was found by the side of the road, where his mother had been killed by a car. At Cleland, I also hand-fed kangaroos. As they pawed at the food pellets in my hand, I resisted the urge to pull back as their whiskers tickled my palm. Yet these experiences were just a tease compared to seeing these – and more – animals in the wild a few days later, when I visited the aptly named Kangaroo Island.

Kangaroo Island is often called Australia’s Galapagos – and for good reason. There are no street lights and no chain restaurants, and more than half of the island – some 2,250 square kilometres – is still native bushland.

More than 75,000 Kangaroo Island kangaroos, approximately 11,000 koalas and just 4,500 humans reside on the island, which is located 13 kilometres off Australia’s southern coast and a 30-minute flight from Adelaide. (Still, an estimated 1 million sheep outnumber all-sheep farming has long been the island’s primary industry.) And that’s just the land dwellers.

My first stop after arriving on the island was Seal Bay. It’s located on the island’s south coast, where there was nothing between me and Antarctica except for chilly ocean waves and a beach dotted with Australian sea lions.

One mammoth mother had a flipper laid protectively over her pup as they lolled in the sun on the powdery white sand, while other adults showed off their swaggery waddle as they barked and made their way to and from the surf.

Enter ELLE Canada’s contest for a chance to win a trip to Kangaroo Island!

I couldn’t even count all the pups sleeping in the sand dunes. "They’re waiting for their mothers to come back from feeding so they can be fed too," explained my guide, fourth-generation islander Scott Ellson, of Exceptional Kangaroo Island tours. "Hold it. There’s a wallaby."

Not three metres from us, amid all the sea lions, was a little grey macropod. The Tammar wallaby is virtually extinct on Australia’s mainland but quite common on the island. He casually opened his eyes to check us out and then proceeded to go back to sleep.

"He’s really not scared of us?" I asked.

"There are no predators, like foxes, on this island," he explained. "So they don’t have anything to fear-except the eagles."

Less than an hour later, I was sitting at a picnic table beneath narrow-leafed mallee trees and dining on freshly caught barbecued King George whiting, an island delicacy. I counted nine kangaroos taking a siesta in a grassy meadow nearby.

"There are usually more," said Scott. "At sunset, there are often more than 300 kangaroos." There’s more to see on the island than wildlife: Scott, and later his brother Rob, a fellow guide, made a point of showing me an assortment of quirky local mailboxes made from wine barrels, old washing machines and even a "dunny" (toilet).

"We might see a fuzzball in these blue gums here," said Rob as we pulled up to yet another prime viewing spot. "These leaves taste like chocolate to the koalas." Sure enough, there were three of them munching away in the branches overhead.

"They look cute now," Rob went on, "but if they are outside your house at 3 a.m., they make a lot of noise. They sound like feral pigs riding Harley Davidson motorcycles!"

Another morning, while we were on our way to see the New Zealand fur seal colony at Flinders Chase National Park, we stopped at what the locals call "Wallaby Avenue," a stretch of road where wallabies like to warm up after a cold night. "We call that one a six-legged wallaby," joked Rob as a mom stood with a joey’s two back paws sticking out of her pouch.

Suddenly, the seven-month-old squirmed and then flopped out of the pouch. He staggered around for a few seconds and then scratched his ear with his hind leg before taking a couple of tentative hops. "Now that’s about as good as it gets!" said Rob, laughing.

Later on, I asked him if he ever takes the island for granted. "Growing up, if we complained about anything or my mom thought we were being ungrateful, she would say ‘Think about Lucy.’ It’s an island saying." During my first day on the island, Scott had taken me to see a beautiful patch of remote farmland with a very modest two-room stone homestead. This was Grassdale Cottage, Lucy Edwards’ house.

As we peered into the windows of the historic site, Scott told me Lucy’s story: She arrived on the island with her husband in 1949. But three years later, when their son was just three, her husband died. Everyone expected Lucy to leave, but she persevered. She had a hard life: She eventually cleared 243 hectares for sheep farming, while raising her son, all on her own.

"Lucy loved this island," Rob told me. "And so do I. If I have my own kids one day, I’ll probably remind them to think of Lucy too." I don’t expect that any short-term island visitors, like me, will ever need such a reminder about our time spent in this remarkable part of the world.

Where to stay
The first thing I noticed when I arrived at Southern Ocean Lodge (southernoceanlodge.com.au) and was ushered into the Great Room was the panoramic view of the craggy coastline and the accompanying natural soundtrack of crashing waves. I immediately wanted to go explore the secluded beaches and take a clifftop walk overlooking an osprey nesting area. (And I ended up spending some lovely sunrises and sunsets doing just that.)

The second thing I noticed was all the little touches that make the 21-suite lodge so comfortably luxe – like the plush khaki cushions featuring a custom kangaroo print and the food sourced from island producers. (I had my first taste of Australian marron, a type of freshwater crayfish, as well as several varieties of local ligurian honey – the island has the world’s last pure population of ligurian honeybees.)

I took a nightly post-dinner soak in my suite’s outdoor hot tub – if you can resist the urge to push the button for the jets, you won’t drown out the soothing sound of the surf. It’s a sure way to blur the line between a dream and such a superb reality.

In Adelaide and beyond…

Where to stay
One of South Australia’s newest guest houses is also one of its most famous farms. The Kingsford Homestead is a 45-minute drive from Adelaide on the western edge of the Barossa Valley.

For seven years, the property served as the set for McLeod’s Daughters, Australia’s answer to Dallas. Borrow Jas, the property’s kelpie sheepdog, and head out for a walk along the North Para River. Check out the property’s most requested feature: a secluded hilltop bathtub. The sweet song of the crimson-breasted Eastern Rosella will be your only (welcome) disturbance.

Day trip
Adelaide is the gateway to the country’s oldest and most famous wine regions, including the Barossa and the Adelaide Hills. Thanks to my guide, Mary Anne Kennedy of Taste of South Australia tours, I got a good sense of the regions’ flavours. We toured Hentley Farm Wines , where, in addition to Shirazes, Ports and Zinfandels, we tried wild fennel and soursobs, an edible flower, which chef Lachlan Colwill serves as part of his tasting menu.

Later, we stopped by chef Maggie Beer’s headquarters – Beer is often referred to as Australia’s Martha Stewart, and she’s also a champion of verjuice, a delicious unfermented grape juice used for deglazing pans and dressing salads.

Another day, we stopped for lunch at the White House in the Adelaide Hills. When I asked the waiter how big the beef bourguignon pie was, he thoughtfully described it as "the size of a cricket ball." That didn’t mean much to me, but I enjoyed the savoury meal.

Time to shop
Australia may not be best known for its sense of style, but that might be changing. I was happily surprised to discover a number of Adelaide boutiques carrying a vast assortment of Aussie brands. Along King William Road, I stopped in at Eco D, which carries more than 25 local designer brands, including Ecology, its in-house line of knits and separates.

Down the street, up-and-coming designer Liza Emanuele has a shop and design studio offering up David Dixon-esque dresses and fitted jackets. And one shop over, at Whistles (whistles.com.au), there’s an eclectic mix of international brands, like See by Chloé, amid Australian favourites like LOVER, Camilla & Marc and Claude Maus.

In downtown Adelaide, I visited the JamFactory (jamfactory.com.au), a non-profit arts studio and shop where I picked up some cards featuring whimsical prints of the local scenery by painter Ursula Kiessling.