A perfect day at the beach: Antigua

Drift away at Jumby Bay, a private island resort in Antigua. 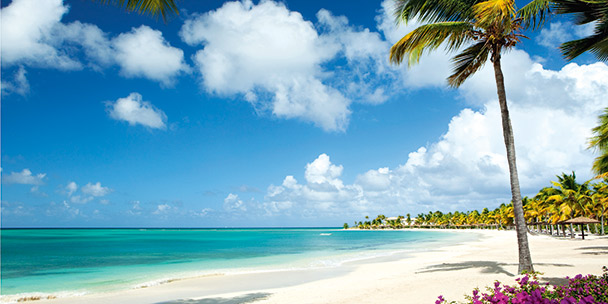 Just relax. That’s all it takes to float in the sea. Lie back in the water, watch puffs of clouds pass overhead and go with the flow — until you are blown back to shore. Then repeat.

This became my routine: I’d swim out and then let the balmy teal waters of the Caribbean Sea lap around me and slowly carry me back to Jumby Bay Beach. The only thing that occasionally interrupted my rhythm was a detour to my umbrella-topped lounge chair on the soft, warm sand for a sip of something icy and a mini-siesta.

I never thought I would spend my time here like this — as crazy as that sounds. I was first attracted to Jumby Bay, a 121-hectare private resort that takes up all of Long Island, which is just three kilometres off the northeastern coast of Antigua, because of all there is to do here: kilometres of bike paths, snorkelling excursions to nearby reefs, cooking classes, day trips to the historic English Harbour on Antigua’s mainland and jaunts to explore the caves and pink beaches of nearby island Barbuda.

Topping my must-do list was a helicopter ride to Montserrat, which became a modern-day Pompeii after a 1995 volcanic eruption covered two-thirds of the island in ash. So when the Montserrat trip turned out to be full (tip: book far in advance!), I wondered what I’d do instead.

It turns out I wasn’t disappointed with my beach day — which was capped off by an evening boat cruise around Long Island. This is the best way to get a peek at the 50 or so über-exclusive private homes and villas (including those owned by Oprah Winfrey and designers Domenico Dolce and Stefano Gabbana, to name but two) that circle the island as well as the 40 luxe Rosewood Resort-managed bungalow suites set along the main beach.

The circumnavigation was also a lovely way to see some of the island’s natural wonders: Pastor Bay Beach, which from June to November is a protected nesting ground of the critically endangered Hawksbill sea turtle, and Flinty Bay, where, around 3000 BC, Amerindian people were drawn to settle because of the rich flint deposits.

“In that bay, there are flint stones covered in seaweed on the beach,” island resident Beryl Jones explained to me later. “When they get really hot, they give off sparks. It’s one of the few places in the Caribbean where you can see this.”

On my first night on the island, I got a very kind invitation to join locals George and Jayne Dionisiou and some of their friends for dinner at their home. Over a delicious alfresco Asian-Caribbean-fusion meal prepared by their private chef, Baggy Evans, the British couple explained how they first came to the island six years ago.

“I had defibrillations it was so beautiful,” joked George. They promptly bought L’Acqua, their grand home with its own pool and beach (and an impressive view). They divide their time between the island, the United Kingdom and Spain. (Like many of the island’s resident owners, they rent out their estate when they are away.)

“Everything is relaxed here. If we feel like going out, we’ll have a ‘date night’ at the Estate House Bar,” said Jayne, referring to the restored 17th-century sugar plantation that is now one of the resort’s restaurants. George explained how they recently bought a fishing boat and often explore local islets where they fish for their own dinner. “Last time we caught snapper,” he said.

For my tour of the main island the following day, they both insisted that I “go and meet Cecilia,” a former model who shot with Helmut Newton and used to live on Jumby with her now ex-boyfriend Robin Leach (of Lifestyles of the Rich and Famous). “She has her own restaurant right near where the Jumby ferry docks [on the mainland],” said Jayne. “You must stop in.” I did. (See “Island Hop”.)

I also got to know my next-door neighbours Beryl Jones and Yvonne Jacques, retired business owners from the United Kingdom — who can’t be missed as they zoom around in the island’s only pink golf cart. (They started a trend: You can now spot custom purple and blue ones as well.)

The two friends lived here years ago and recently came back, buying and renovating Jabberwocky, the three-bedroom villa where I was staying, before selling it, as well as the similar Carisbrooke property right next door, which they kept and now rent out.

In both spaces, they have created a relaxed beach-house vibe where the creamy palette has pops of turquoise (to match the pool and the sea views). Fan-coral-patterned pillows and accents in even more blue hues also dot the homes. I was tempted to never leave the house.

Yet, with all there is to do on the island (and I highly recommend a visit to the resort spa, where they offer a massage that is done with a nautilus shell), if I had another day, I would most likely spend it on the main beach, looking out across the water to Antigua’s mainland. Despite the fact that the resort was at capacity when I visited, I felt like I pretty much had the place to myself, no matter what time of day.

It’s that ultimate luxury that I thought about as I spent some of my final island moments back on that beach. And tucked away on lounge chairs a few umbrellas over, the Dionisious seemed to be doing the same thing. We just smiled at each other and waved knowingly.