A food tour of Quebec City 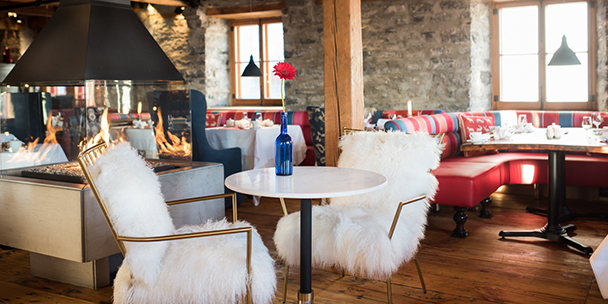 Mention food to anyone in Quebec City, and be prepared for a lengthy discussion about the merits of organic farming, the best wine pairings, and of course, le terroir. It is a word that encompasses everything the residents of Quebec City hold near and dear to their hearts: the symbiotic relationship between the soil, the climate and the geography that create the perfect conditions for products like wine, coffee, chocolate and cheese—all of which Quebec City produces in spades.

The cuisine here ranges from traditional French-Canadian specialties (think foie gras, poutine and tourtière), to molecular gastronomy and surprising pairings as a host of young chefs move into the region. First attracted to the sheer abundance of fresh produce and the quality of ingredients, they are breathing new life into this now thriving foodie scene.

Foodie hotel of choice: Auberge Saint-Antoine is leading the way in Quebec City with their own organic garden, encouraging sustainable farming practices and opening off-site locations of their signature restaurant, Panache.

Panache at Auberge Saint-Antoine
Located in the historic Auberge Saint-Antoine in Quebec City’s Old Port, chef Louis Pacquelin was recently named head chef of this four diamond restaurant and is leading the way in sustainable cuisine for the region. The French-born chef only uses local ingredients—year round. This means when you visit in the winter, don’t ask for tomatoes. Instead, Pacquelin believes in finding inventive ways to work with what’s in season in order to lesson the hotel’s environmental footprint. Most ingredients found on your plate will have been picked that morning from Saint-Antoine’s organic garden on Île d’Orléans.

Le Moine Échanson
The region around Quebec City is best known for producing some of the finest wines in Canada. Best known for their white and ice wine, most menus in the city will feature a great sampling from local producers. Taking their love of wine one step further is Le Moine Échanson, a small, family-owned bistro that doubles as one of the city’s best wine shops. The entire menu on any given day has been inspired by the wine the restaurant is currently serving, so if the bistro is highlighting southern Italian wine, you’ll be sure to find an array of fish dishes teeming with olive oil.

Le Chic Shack
Although relatively new to the food scene in Quebec City, Le Chic Shack already feels like an institution—just about everyone I spoke to asked if I had visited “the shack” yet. Their claim to fame has been their re-interpretation of the classic Quebecois dish, poutine, consisting of fries, gravy and cheese curds. Poutine 2.0 as its known at Le Chic Shack offers flavours like La Coq au Vin with red wine sauce and Bordelaise chicken, a wild mushroom ragout version or try their red-ale braised beef dish with pickled onions and horseradish aioli. Also on the menu: ten different kinds of burgers and homemade milkshakes that can be spiked with your liquor of choice.

La Cremaillere
With one of the most prestigious wine cellars in the city, La Cremaillere has won the Wine Spectator’s Award of Excellence more than ten times and won restaurant of year six time in a row. Find classic Quebecois-style dishes like escargot cassolette, seafood stew and veal sweetbreads. For dessert, try the classic crepes Suzette, flambéed right at your table.

Maple Delights
You can find maple in just about everything in Quebec City. Maple candy? Check. Five different kinds of maple syrup categorized from light to dark, including Grand Marnier and Rum flavoured? Check. Maple-infused whiskey? Mais oui! Many of the staff at Maple Delights are two or three generation maple farmers with long ties to the tradition. Ask for a maple tasting to learn the difference between light and amber grade syrup and make sure to visit the maple museum upstairs.

Le Tournebroche
Much like Louis Pacquelin at Auberge Saint-Antoine, Stéphane Roth at Le Tournebroche is using the best that the region has to offer. Best known for their rotisserie chicken or “Tournebroche chicken,” that is ethically raised in Charlevoix, Quebec, the chef also believes in the purity of ingredients, using very little butter, oil and flour to thicken dishes. Find some of the best Quebecois wines on the menu as the restaurant has partnerships with many local wineries and microbreweries (they’ve even made a special brew that pairs perfectly with their chicken). Taking local to a whole new level, the team tries to make everything in house, so the bread, crackers and most condiments you’ll find on the table have all been crafted in the open-concept kitchen behind your table, oh and there is a daily crème brûlée flavour—perfectly in season, of course.

Érico Chocolatier
Hot chocolate is serious business in Quebec City when the temperature drops. Master chocolatier Érico has you covered with ten different flavours made with pure, single origin chocolate. Add whipped cream, honey, spices or a pinch of hot peppers. The chocolates are all made in house by Érico and his team, and yes, maple syrup can be found inside at least two of them.

Thé à la mode at Auberge Saint-Antoine
Imagined by Auberge Saint-Antoine’s General Manager, Jean-Louis Souman, the hotel’s “Fashion Tea” sees some of Quebec’s best designers paired with a traditional English tea service. The sit-down, two-hour tea service is served salon-style with models mingling amongst guests and circling tables for an up-close view of Quebec’s emerging designer scene, with brands like Inukt, Myel and Bagages de France. Must try: their scones are worth the wait (the tea happens every 3rd Saturday of the month) and served with homemade crème and strawberry jam.