There's a reason why backpackers and jetsetters alike have been flocking to this hot spot since the fall of the iron curtain. Impeccably restored historical buildings, back to back art galleries and café patios galore make Prague a boho dream come true. 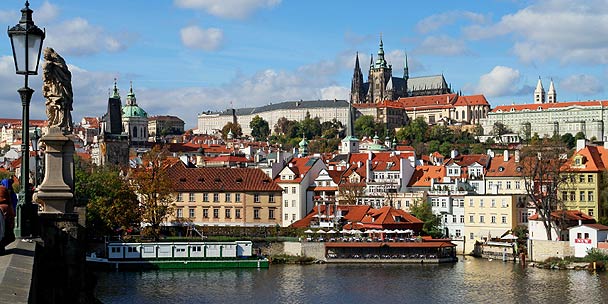 Drop your bags off at the Carlo IV (from 200 euros). Within walking distance of most must-see attractions and city action, this hotel offers all the comforts of home wrapped up in Old World glam.

Start your city tour with a short trek to the Old Town Square, where you’ll find the Astronomical Clock, for those looking to tick it off their list. Then wander the winding streets around Michalska and Jilska, home to so many galleries. On Michalska, Art Decoratif specializes in art nouveau reproductions, including precious pendants and picture frames. Just beside, Art Deco Galerie offers more of the same, as well as vintage clothes. On Jilska, U Dominikana serves up generous, mouth-watering salads on a patio perched at a prime corner for people watching, just below Hotel Savic (from 100 euros), another cute sleepover.

To get to Prague Castle, stroll along the impressive Charles Bridge and watch how the daylight plays against its haunting statues. At the other end, in the shadow of the bridge, lies Na Kampe, a cute, quiet strip of cafes, galleries and the occasional market. Before going on to explore the castle grounds, snack on some delicious tapas at Square Restaurant, on Malostranske nam, where patio chairs are draped with throw blankets for keeping warm.

After your taste of the royal life, stop in at the Franz Kafka Museum, on Hergetova Cihelna, on your way to the Old Jewish Quarter, around Siroka and Parizska. With tombs dating back to the 15th century, the Old Jewish Cemetery, part of the Jewish Museum, remains one of the cities most popular sites. (Not to be confused with the New Jewish Cemetery, where the tomb of Franz Kafka and his parents lies.)

Get your second wind at the nostalgic Franz Kafka Café on Siroka before heading to the shops on Parizska, where you’ll find such tony boutiques as Cartier, Dior, Hugo Boss, Hermes, Ferragamo, Louis Vuitton and Faberge, and on Na Prikope, home to H&M, Lacoste, Puma and an Yves Rocher spa.

Klub Lavka, on Novotneho lavka, serves up a great river-view patio for aperitifs, but the bar gets hopping with club kids at night. Follow up with a dinner reservation at the stylish Fish, on U Luzickeho seminare, specializing in seafood. In the warmer months, the patio offers great views of the Charles Bridge.