It's one of the city's biggest events and ELLE Canada has the scoop on where to go to catch a glimpse of the rich and famous. 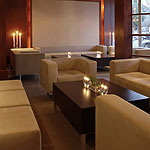 As summer comes to an end, Torontonians across the city are slipping out of their flip-flops and slipping into their best dress to prepare for the 33rd annual Toronto International Film Festival (TIFF). Held from September 4th to the 13th, the excitement is coming to a fever pitch as the town’s best restaurants, hotels and event venues prepare for the onslaught of crazed paparazzi and some of the film industry’s most influential players.

TIFF’s popularity has led Toronto’s celeb hangouts to beef up to maximum security, so be forewarned: Spotting a starlet is hard work. If you find yourself standing behind a barrier at the Four Seasons only to glimpse the back of Keifer Sutherland’s head as he pops into his black SUV, consider it par for the course. Although many of Tinseltown’s finest will be in and about the city, they try their best to go incognito. For you, that means making sure you’re at the right place at the right time; just don’t forget your digital camera!

Here, our check list on where to see and be seen:

Proof Bar, Intercontinental Hotel (220 Bloor Street West)
Sip a cosmopolitan at this chic restaurant/bar and hide behind your best Jackie O shades. You’re bound to see a star or two come in here after a day of shopping on the ultra-glam Bloor Street strip.

One Restaurant, The Hazelton Hotel (116 Yorkville Ave)
Even though hotel management is typically mum on which celebrities stay or dine at their establishments, rumours do circulate through the mill. This is Toronto’s first-ever five-star boutique hotel, so naturally, the elite come here to show off their ‘Choos and people-watch. At last year’s Festival, word was Jen Aniston, Tom Cruise and Robert Redford all stayed at this posh abode.

The Drake Hotel; rooftop patio (1150 Queen Street West)
If gazing at Hollywood’s typical gossip-fodder is too “been there, done that” for you, then head to the rooftop patio of the Drake Hotel in the artsy Queen West district. A bit less pretentious, but not missing on style, the rooftop patio offers a private respite from the madness that is downtown. Who knows, you just see Indie sweetie Michael Cera munching on their oft-lauded sushi.

More TIFF celebrity hot spots on the next page!For a guaranteed quick celebrity fix, grab a Chai Latte from Starbucks and take an early morning stroll down Cumberland St in Yorkville. This Tony neighbourhood is TIFF Ground Zero and it’s where you’ll find the highest concentration of movie stars. If purging your pocket book is of no consequence, try to book a languid lunch reservation at Sassafraz (100 Cumberland St), Sotto Sotto (116 Avenue Rd) Café Nervosa (75 Yorkville Ave) or the newly opened celebrity favourite Le Pain Quotidien (10 Yorkville Ave). The longer you stick around, the better your chances of sightings, so tip your wait staff generously; they’ll be more apt to allow you that fourth cup of coffee.

If your dancing shoes are screaming for attention, then the TIFF festival after-parties are for you. On Friday, September 12th work your charms to get into Ultra Supper Club (314 Queen Street West) where girl-about-town Lindsay Lohan is hosting a party with her girlfriend DJ Samantha Ronson. The following night, (364 Richmond Street West) brings in Benji Madden to spin some records for a party hosted by his love interest, Paris Hilton.

Follow this guide and you’re guaranteed to spot at
least one A-lister, but in case you find yourself celeb-less during the Festival, check back with ELLECanada.com for our official TIFF coverage!