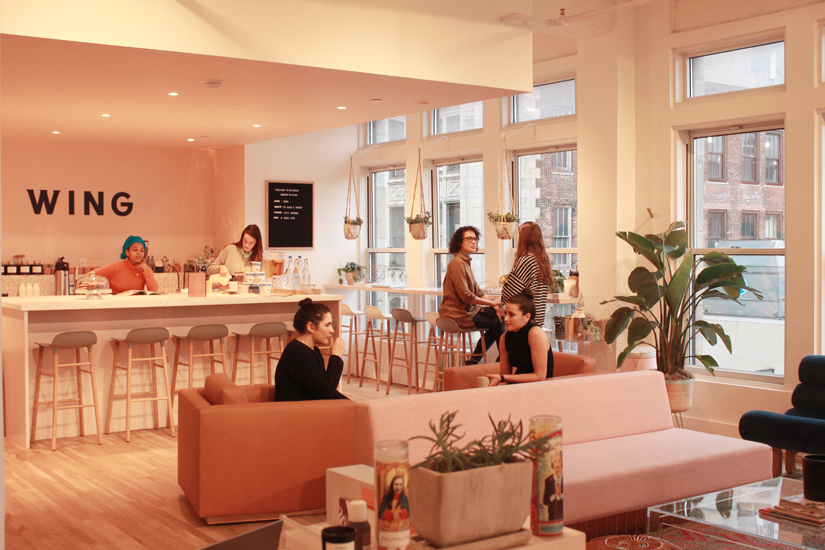 It’s Tuesday morning in Manhattan and the city is doing its daily rush-hour dance: taxis weaving through the numbered streets and over-caffeinated crowds surging into offices. In a luxury penthouse in the Flatiron District, the Wing, a women-only co-working space and social club, buzzes with the same sense of purpose. Women bustle through the airy, sunlit loft. Some are on hands-free calls. Others sit near the colour-coded feminist library tapping away on MacBooks. But almost all stop to say hello to the Wing co-founder Audrey Gelman, who is perched beside me on a millennial-pink velvet sofa.

Gelman, who is soft-spoken and unassuming, is recalling the events that led to the creation of the (currently) only all-female co-working space in NYC. As a young PR exec and political consultant (she was a press aide on the 2008 Hillary Clinton campaign), she’d often find herself rushing from airport to client meeting to spin class and changing in public bathrooms. Maybe it was when her bare foot almost touched the floor of a Starbucks stall or when she pretended to be staying in a hotel so she could charge her phone there, but at some point it dawned on her that she needed a base.

“A light bulb went off,” says Gelman, who quickly became inspired by the women’s social clubs of the early 20th century. (There’s no shortage of co-working spaces in this era of the self-made millennial, but you’d be hard-pressed to find one without a cluster of tech bros blowing off steam around a foosball table or indulging in a boozy brainstorm.) “The more I talked to other women about it and the more they confirmed this was a daily struggle and there was no smart solution to it, I knew there was going to be enthusiasm for it.”

That’s putting it lightly. Since Gelman and business partner Lauren Kassan opened the Wing in late 2016, it has racked up a cultlike Instagram following and a lengthy waiting list of applicants. The 650 members range from a NASA lawyer to a member of the New York Philharmonic to Lena Dunham (Gelman’s longtime BFF) to Canadian photographer Petra Collins, and they use the space to write, close deals and connect with like-minded women. It’s perfect timing, considering the current political climate (read “Trump”). “We find ourselves in this unique moment today where I think the solidarity among women, the belief that we have to create strong communities of women, feels more powerful than ever,” says Gelman. “We wanted to be an extension of something really inspiring already happening online, inviting women to deepen those connections by sitting across from one another.”

This connection is what Mary Aitken was banking on in 2004 when she launched Verity, a multi-service women’s club housed in a former 19th-century chocolate factory on Toronto’s Queen Street East. “Women simply do not have access to the development opportunities that men do,” says Aitken, a former investment banker who experienced such inequalities first-hand. Which is why the club’s main objective is to smash the glass ceiling by preparing women for senior leadership roles. For its 800 members, this means access to business events, networking opportunities and the mentoring MasterMIND forum.

Business isn’t the only thing on the agenda at Verity. With 5,300 square metres at Aitken’s disposal, it made sense that she would also “provide spaces in which to work out and unwind,” she says. The chic compound offers perks like the on-site gym and Sweetgrass Spa, an in-house florist, a restaurant and access to doctors.

The Wing, too, has developed a formula for balancing pampering and productivity. On-demand blowouts are available, as well as a full complement of Glossier products – which are key for self-presentation, says Gelman. There are also showers and a breast pump. The Wing hosts workshops (think Beyoncé-themed dance classes), pop-ups and panels, welcoming speakers as high profile as Amber Rose.

Such bells and whistles usually come at a cost, and Verity (from $2,000 annually) and the Wing ($3,010), and even the London-based women’s online networking group the Sorority ($1,643), are no exception. This raises the question: Are all these amenities crucial to supporting women? Grassroots organizations like Toronto’s WIPP (Women Inspiring Passion and Purpose) and Vancouver- and Toronto-based HER Collective prove that support can exist without annual fees.

Public-relations consultant Talya Macedo founded HER Collective in 2014 after her work repeatedly went uncredited by male counterparts and she realized her friends were facing the same challenges. It has six core members who act as a thread between various women-run, bottom-up organizations, provide mentorship and networking opportunities and run an online publication that’s a platform for blossoming voices – all free of charge. “I always loved the idea of women and girls thriving together,” says Macedo. “We want to amplify the voices of women we see potential in and create a networking hub while sparking new ideas.”

Happily, these types of cyber support groups are becoming more common. Collectives like Gyalcast (which hosts a femalecentric podcast and workshops) and Filling the Gap (a Tumblr account dedicated to gender equality in the workplace) are unapologetically carving out space for marginalized voices. The trend of turning these online forums into tangible bricks-and-mortar communities is growing beyond high-profile outlets like the Wing and Verity. In Toronto, Shecosystem encourages productivity and wellness by offering women office space where they can host a meeting or catch a yoga class.

The methods may differ, but one thing is clear: Whether online or within the polished confines of a downtown loft, when women come together, incredible things take shape. As more members flood in and the Wing hums a song of shared productivity, Gelman reveals that she and Kassan hope to expand to Canada. (Spaces in Soho, Brooklyn and D.C. are already in the works.)  “Everything I’ve been able to accomplish in my life is because there’s a community of women around me,” says Gelman. “Don’t go it alone. Run with a pack.”