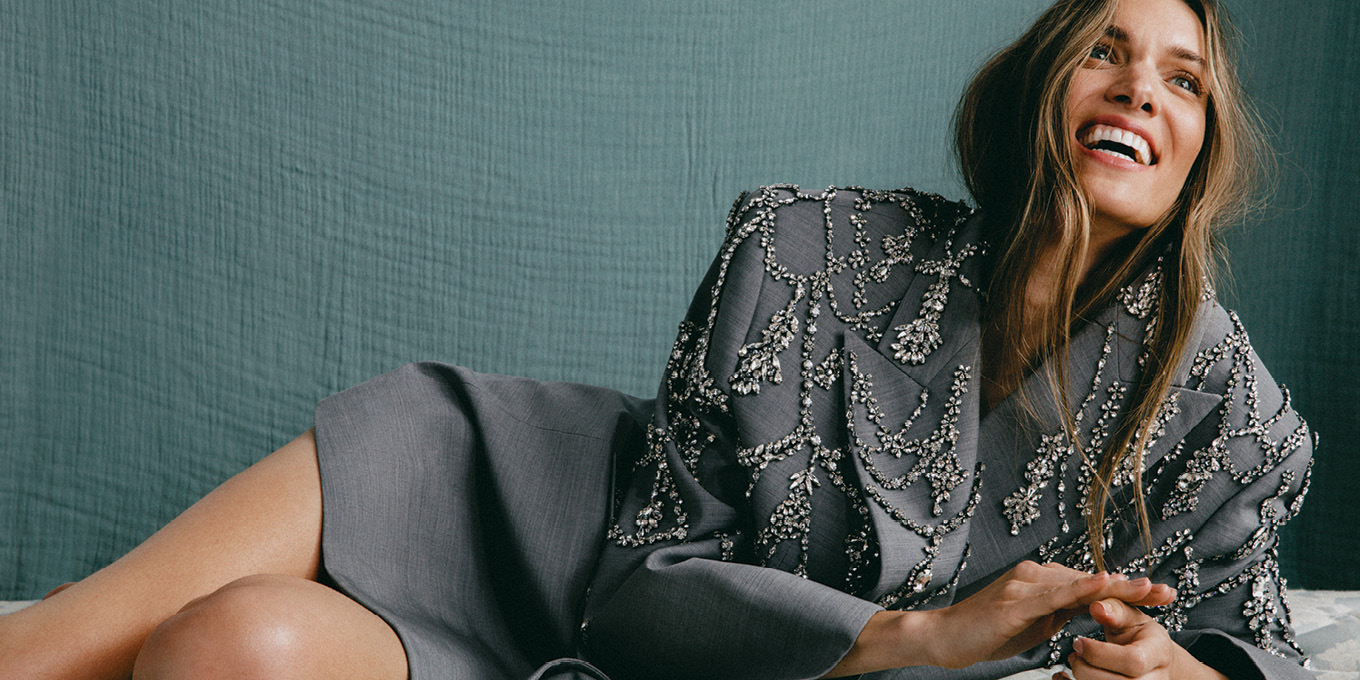 Charlotte Cardin has been a singer ever since she could speak. Whether she was in the back seat of the car—bright plastic echo mic in hand—on the wooden swing set in her backyard or watching Much Countdown on Fridays, she would belt out Spice Girls’ and Backstreet Boys’ headiest tunes in the most non-childish way. The lyrics might have been approximate, but the music never was. I know this because I was there.

Despite our five-year age gap, my sister, Charlotte, and I have always been inseparable—the kind of “I’ll have what she’s having” inseparable. So when our parents gave me the Britney Spears Baby One More Time CD for my birthday, knowing that my obsession with the teen pop star was on the verge of becoming unhealthy (my own rhythmic prowess, low-rise jeans and high pigtails would later prove this), they didn’t know that they were simultaneously gifting my four-year-old sister with a dream—one she is now living.

Charlotte was nine years old when our mom signed her up for her first singing lessons. I remember being floored by her vocal abilities a few weeks later. We were sitting side by side in an old armchair we’d brought a little too close to the TV, watching MTV’s global benefit in support of the 2004 tsunami victims. Kelly Clarkson, with her freshly dyed blond ’do, enviable punk attitude and iconic rocker look (black sleeved gloves and all), was performing “Since U Been Gone” and hit a number of really high notes after the bridge. And with the same natural ease and fluttering vibrato, my sister nonchalantly echoed the American Idol winner’s vocal mastery. Fast-forward 18 years and Charlotte Cardin, with her smoky voice, powerhouse range, Fender Mustang guitar and effortless cool (channelling the likes of the late Amy Winehouse minus the overshadowing demons), is emerging from a vast pool of singer-songwriters—she has some 272 million global Spotify streams (half of which I account for).

In the spring of 2021, the success of her pop debut, Phoenix, a deeply personal album inspired by broken boys, broken hearts and the desire to be liberated and rise from one’s own emotional ashes, made Charlotte the first female artist to spend several weeks at number one on the Canadian Billboard charts since Céline Dion in 2016. More recently, she led the 2022 Juno Awards pack with six nominations (The Weeknd and Justin Bieber each nabbed five) and ended up with four big wins: She was named Artist of the Year, while Phoenix received Album of the Year and Pop Album of the Year and her song “Meaningless” won Single of the Year. 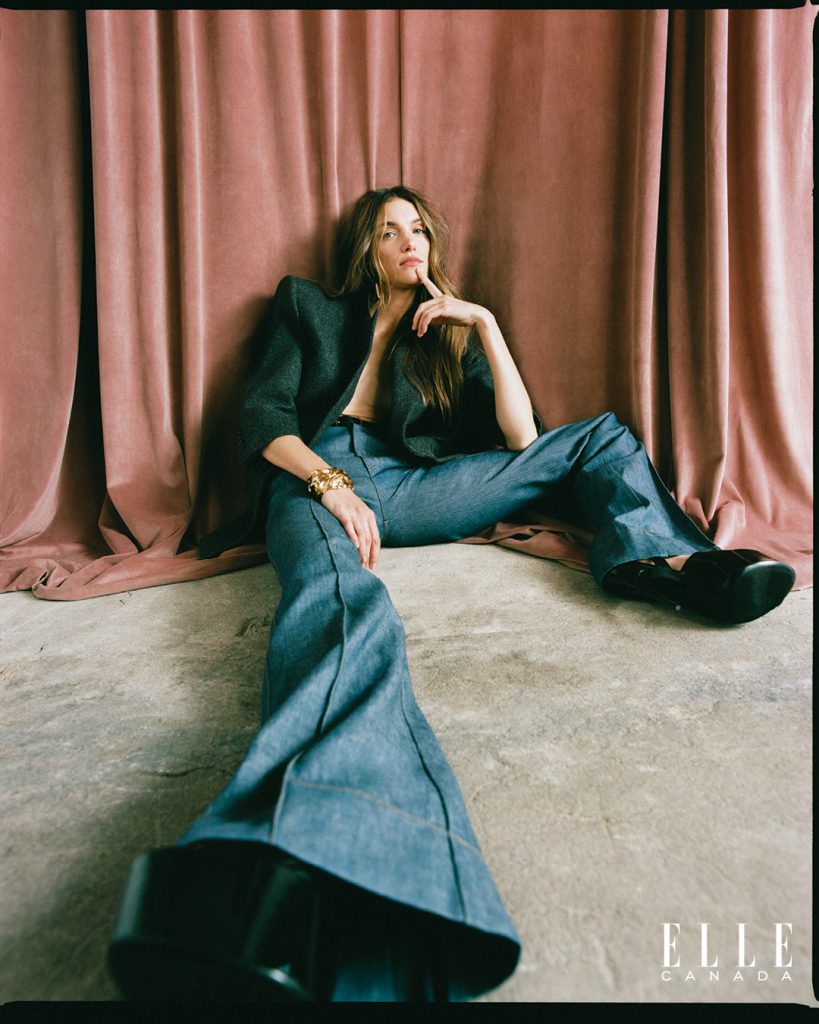 “Music is the most wholesome way I've found of letting go, of drowning out the noise and staying grounded in truth. ”

“It’s pretty fucked up,” she tells me as we toast to her achievement at a Junos afterparty that had the Toronto skyline as its backdrop. Margarita in hand, she’s wearing the Kiko Kostadinov cherry-red trousers, oversized panelled Acne Studios T-shirt and Ancuta Sarca knitted sneaker pumps she wore to perform that night and pick up her trophy for Album of the Year. (She had received her other three awards the previous night.) “I’m freaking out. I’m so proud to be recognized among artists whom I admire and who have been around for longer than I have, especially for an album that is just fully me—one I believe in 100 percent, one for which no compromise was made.”

Phoenix’s 13 anthems were therapeutic in their own way. They were co-written with Montreal artist Lubalin (the TikTok star who remixes random internet drama), producer and multi-instrumentalist Mathieu Sénéchal—often seen onstage alongside Charlotte—and manager and BFF Jason Brando, and this creative experience empowered Charlotte. “I was able to access the truest, most vulnerable parts of myself,” she says. “It gave me the confidence to be exactly who I want to be with no regard for what people want me to be.” Once a shyer and more self-conscious person, Charlotte has learned to embrace honesty and speak her mind with confidence rather than fear judgment—whether it be in a song or a conversation. Often called “sweet” and “fragile,” she is no longer letting the good girl labels define her. “I can certainly be sweet and fragile sometimes, but I’m so much more than that,” she says.

Charlotte was only 18 when she got her big break on La Voix, the Québécois version of The Voice; she landed in the top four finalists and got caught up in the reality-TV whirlwind. “I think the public’s first impression of me lasted well beyond that moment, but I was young and didn’t know who I was as an artist yet,” she says. Today, more and more people are seeing Charlotte for who she is as a person and as an artist, and that’s because music is her way of sharing things she otherwise wouldn’t talk about; sometimes she surprises herself with how personal some of her lyrics are. “Phoenix has been a stepping stone to having the courage of my convictions,” she says. “I’ve learned to reveal even the realest parts of myself and be okay with it, and it feels really good.” 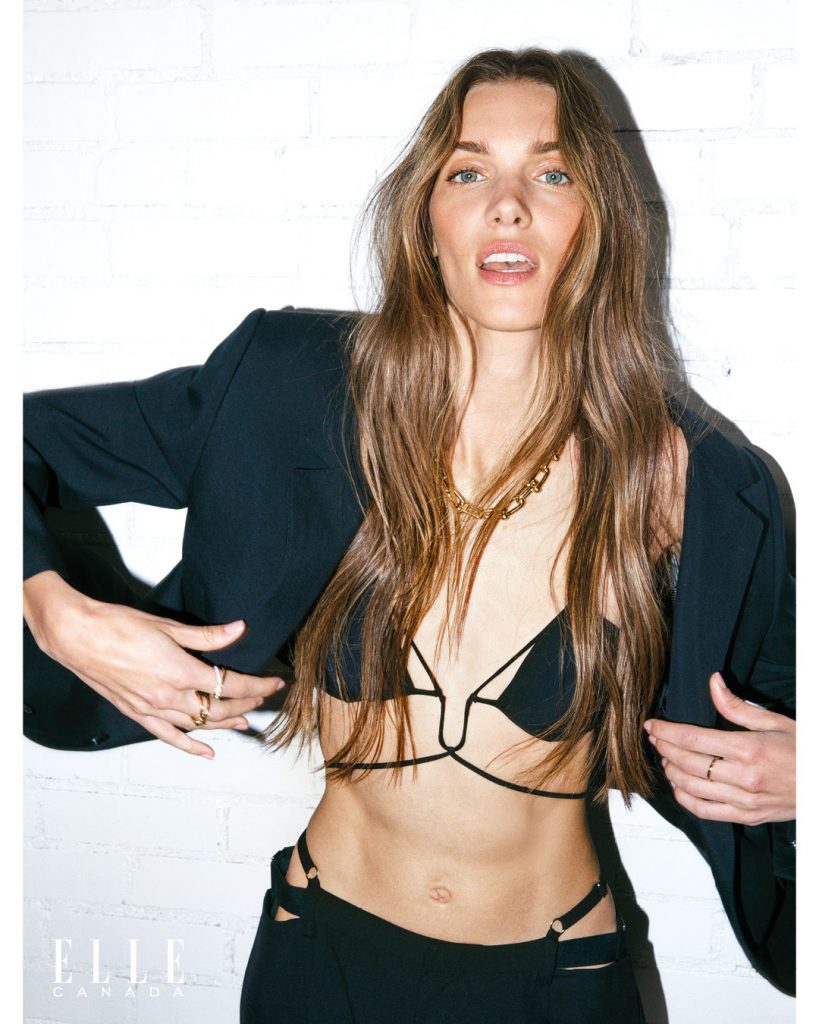 “Whenever I start overthinking what I should wear or how I should be, I go back to my music and focus on the stories I want to tell. ”

As a teen model who often had no say in how she was being made to look, Charlotte never felt like she belonged or was physically good enough for the fashion industry. Through music, she’s been able to reclaim control over her body image. “I’ve always been comfortable in my own skin, but like everyone, I have my share of insecurities,” she says. “Music is the most wholesome way I’ve found of letting go, of drowning out the noise and staying grounded in truth. Whenever I start overthinking what I should wear or how I should be, I go back to my music and focus on the stories I want to tell.”

The stage has also served as a confidence booster for her. Whether she was performing The White Stripes’ “Seven Nation Army” for a school talent show with her then tween band, Phantom Power, clad in camo and sporting an eyeshadow look David Bowie would approve of, or, more recently, her own sultry pop-rock number “Daddy,” wearing baggy jeans and a Miles Davis XL tee she stole from our dad, it has always been obvious that she is most herself on a stage. “The moment you perform is when you bring your music to a climax and you finally connect with your audience,” she tells me. “You write a song and put it out in the universe for people to listen to and relate to in their own way, but the moment you get up onstage is when you come together with the audience and experience the song as one, no matter how you’ve felt the track before.”

For the European leg of her Phoenix tour, Charlotte got to perform at Paris’ Le Trianon—a regal Baroque concert hall—for an intimate crowd of 1,000. “It was the best show of my life,” she says. “We hadn’t played in Paris for three years, and we had no idea how we’d be greeted. Looking at the data is nothing like seeing people’s faces light up when they vibe to your music. We got onstage, and the connection was immediate. People knew all the lyrics to my songs and were singing the whole time. It was magical.” 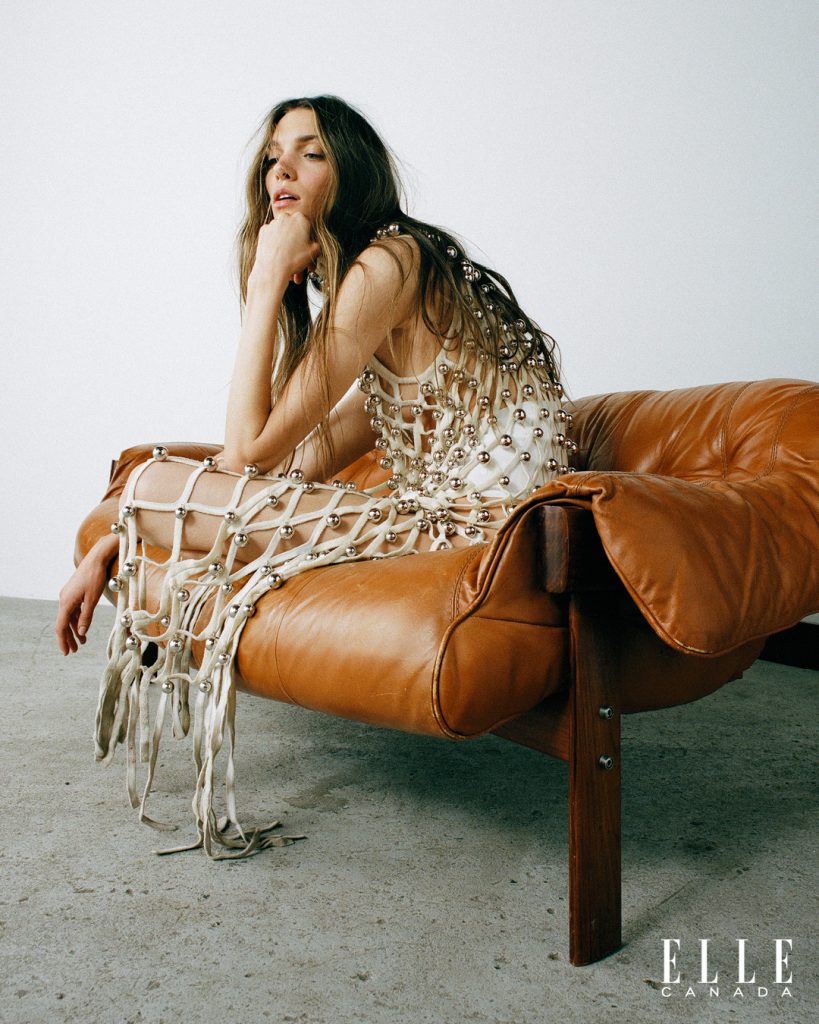 “Each song I write reveals part of me—to myself and to the audience—and I feel like I'm always redefining myself in that sense, because as humans, we're constantly evolving, but as an artist, you have the added responsibility of not taking who you are as a given, and you have to keep challenging and reinventing yourself.”

Even though she has found her identity as an artist, Charlotte still struggles when she’s asked to put it into words. “‘Who are you as an artist?’ is a question I’m asked all the time, but I don’t have the answer,” she says. “I’m influenced by so many different genres, and I want to explore different styles, and although I’ve built more confidence these past few years, I’m still learning new things about this job every day. Each song I write reveals parts of me—to myself and to the audience—and I feel like I’m always redefining myself in that sense, because as humans, we’re constantly evolving, but as an artist, you have the added responsibility of not taking who you are as a given, and you have to keep challenging and reinventing yourself. The fact that I’m always questioning everything is what I think allows me to write good music.”

Charlotte’s second album—which is well under way and set to be released in 2023—will have an overall more indie feel and will feature some cool collabs. “Lately, I’ve been listening to a lot of rock and country music, so there will definitely be those influences, but it’s still pop—‘a leftist pop,’ if you can call it that—and it is still really me,” she says. Phoenix’s creative quartet has already come up with a solid list of tracks that continue her self-reflective journey.

Having to answer only to herself, Charlotte knows what she wants, but more importantly, she knows how to get it. Having now officially conquered Canada, she’s determined to take Europe and the U.S. by storm, which is prompting her big move to London in the fall. “It’s a leap of faith because I don’t have many contacts in the U.K., but every time I’m in London, it feels like a natural place for me and my music,” she says. “The British music scene has always inspired me, and there are plenty of artists and producers there who I plan on working with. It feels right to go where the music speaks to me the most.”

Poised for superstardom, Charlotte will have to get used to having her hands full of gold hardware—and I’m not talking about rings. With just one album, she reached household-name status here in Canada, but her journey is just beginning. And no matter where she is in the world or where her career takes her, I am—and will always be—her biggest fan. 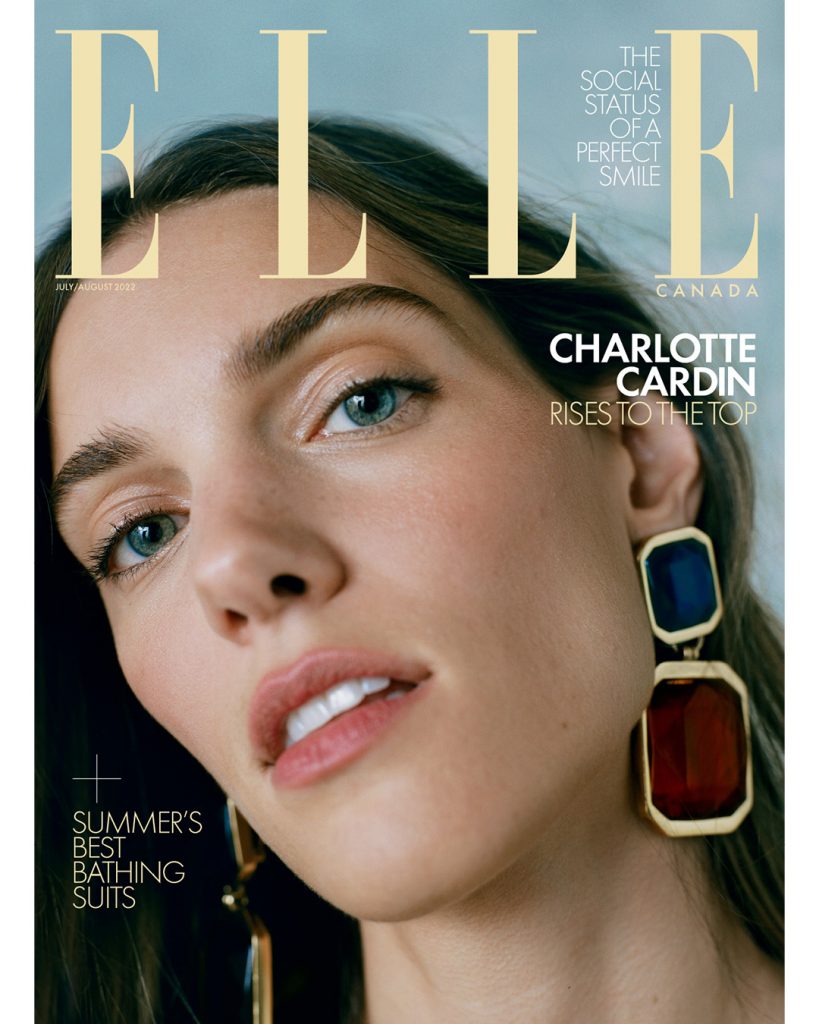 Find the full story in the Summer 2022 issue of ELLE Canada — out on newsstands and on Apple News+ June 20. You can also subscribe for the latest in fashion, beauty and culture.