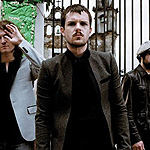 The Killers have decided to release and album of “b-sides, rarities and some new material”. The result is the brand new release Sawdust. I think the reason some of these b-sides and rarities didn’t make it onto Hot Fuss or Sam’s Town is because, well, they’re just not that good. Thankfully they included some classic covers. These save the album from completely stinking out the joint. They cover “Ruby, Don’t Take Your Love to Town” (a The First Edition cover), and “Romeo and Juliet” (a Dire Straits cover). Both covers aren’t spectactular , but they’re adequate. The trick to successfully covering another artist’s song is to do something distinct and unique with them. There’s no denying that Brandon Flowers has a decent voice so he’s naturally going to sound good singing a song, but he lacks creativity with these covers. It’s a bit disappointing , because you know they’re capable of more. In fact,this whole album makes you feel like giving them a pep talk; something like , “Come on guys. Pull your heads out!You can do it! You can do anything you put your mind too!” Why? Because the Killers are a great band, but this album is not reflective of that. However, it must be said that the first track “Tranquilize” featuring Lou Reed, is awesome. Lou Reed also makes an appearance in the video for the song. As always, remember, music is subjective so I leave it up to you, dear ellecanada.com readers. Check out Sawdust by The Killers and let me know what you think.

If you’re Canadian, anywhere near a radio and not completely oblivious, you’ve heard
Jully Black’s hit single “Seven Day Fool”. It’s a good song, but like classic Canadian radio, (with Canadian artists) it gets played, played again, and played some more. Nice one CRTC. Luckily it’s a great song. Most people I’ve talked to about that particular track, first thought it was Christina Aguilera, and that’s not an insult! The two artists share a similar sound and both of them are smokin hot. Jully Black isn’t entirely new on the scene but at 30, she’s an up and coming talent to be reckoned with. This album is truly a bit of everything. As you probably know, “Seven Day Fool” (an Etta James remake) has an original sound, whereas “Until I Stay” is straight up pop, there’s lots of classic Jully Black R&B and some well produced hip hop undertones. My favorite song on the album is “Never Lost My Sight” and for the most part, it’s a very listenable album. “Catch me when I fall” was a bit boring but the standard ballad for every album. I also am impressed with the whistle solo in the intro of “Wishing”. I’ve said it before, you can’t go wrong with a whistle solo. I challenge you to tell me one song where the whistle solo didn’t work. You can’t do it. I liked this album. She should come out with another one quickly. With Canadian radio, you should hit while you’re hot and right now, Jully Black is hot.

Love or hate my reviews? Have a new band that’s worth listening to? Let me know by e-mailing me here! [email protected]One Republic Dreaming out Loud, Mosley/Interscope

This is the debut rock album of L.A.-based band One Republic. They had a HUGE hit with Timbaland last year that you may already know about. It is called “Apologize” and it’s really good. It’s kind of weird because One Republic had a hit song before they ever had an album out. Months later, we’re introduced to their debut, Dreaming Out Loud. Cheesy name, yes, but don’t let it deter you. I don’t know the band personally, but I’m going to go out on a limb here and say that it’s heavily carried by lead singer Ryan Tedder. You should see this guy’s resume! At 28 he’s written and produced singles with artists such as Chris Cornell, Ludacris, Lupe Fiasco, Paula Deanda, Timbaland, Hilary Duff, and this is to name just a few! The boy is talented and the album is a good indication of this. I know it’s pretty classic to make comparisons in music reviews, but it’s the best way to introduce an artist’s first album and I really hear Coldplay undertones in this record. It may have to do with Tedder’s ability to kill it on the piano. The album is produced by Ryan Tedder and and Greg Wells and they’ve done a really decent job. My favorite song is “All Fall Down”. I think you’ll dig it. In terms of a first album, I’m impressed. However, I’ll make you a wager, give One Republic one more album and Ryan Tedder goes solo. He’ll pull a Timberlake. If he doesn’t, I owe you 12 cents.

Love or hate my reviews? Have a new band that’s worth listening to? Let me know by e-mailing me here! [email protected]