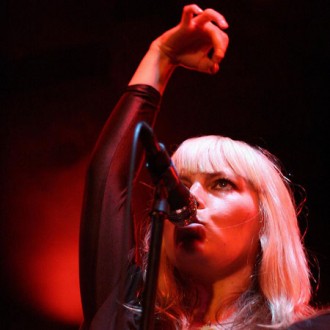 ‘The Step and the Walk’ rockers wanted to get away from the huge “wall of sound” they created on their first two albums, to have more space on the record, but without losing any power.

Speaking ahead of the group’s performance at the Tramlines festival in Sheffield, Northern England, singer Liela Moss said: “I guess this is our like, monstrous pagan devotional album.

“There’s loads more space, that’s what we started off saying, let’s have an opportunities where there aren’t just guitars hitting the same frequencies at the same time.

“We’ve lost the wall of sound we had on the last two records, we’ve kept it really powerful but lean, then sort of let all those voids have breathing space and that’s where the abstract tales are told. Where you’ve got space you feel the kick drum and bass really getting in your belly.”

The band recorded the album between Los Angeles and London with two different producers, who they say had contrasting approaches to recording.

Drummer Olly Betts added: “It’s been a completely nomadic process. We worked with Rich File [previously of UNKLE] for a couple of tracks in the UK, working in a metronomic way ,them the more we were throwing on the table we went to Los Angles and worked with a guy called Andrew Sheps, who works closely with Rick Rubin and we did the lion’s share of the record with him, which he recorded in a much more lose, natural way.”

Tramlines also saw performances from artists as diverse as Ash, Olly Murs and Toddla T, as well as hundreds of other acts in over 70 venues across the city.

The festival was opened by Eighties legends Heaven 17 on the Nokia Unannounced Stage, which also saw performances from the Long Blondes singer Kate Jackson and Omar.