Take That stuck in robot

Take That's Mark Owen and Howard Donald got stuck inside their giant robot stage prop at the weekend. 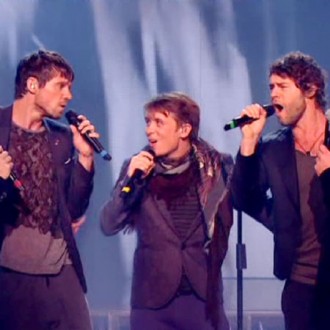 Two members of Take That got stuck inside their giant robot stage prop at the weekend.

Mark Owen and Howard Donald were stranded in the palms of the 30 metre robot torso and arms – nicknamed OM – as they performed at the City of Manchester stadium on their Progress Live 2011 tour.

After getting stuck three metres from the ground, the singers had to be freed by roadies with ladders.

Bandmate Gary Barlow told the crowd: “Normally at this point in the show we’re all standing here together.

“But it seems that despite 300 people working on this show, you still get some hitches.”

Howard then had to perform the next track, ‘Never Forget’ – on which he sings lead vocals – from inside the robot, before being helped down.

The robot – part of the group’s £15 million stage set for the tour – was later fixed and the band completed the show, with tour managers saying they do not expect any further problems during the tour, which sees the band appear across Europe until July 29.

Take That are not the only band to run into problems with their elaborate stage set – U2 famously got trapped inside a huge lemon prop they used during their 1997 PopMart tour.