Steven Tyler has admitted he has a fractured relationship with his Aerosmith bandmates but says none of that matters when he and Joe Perry write songs together. 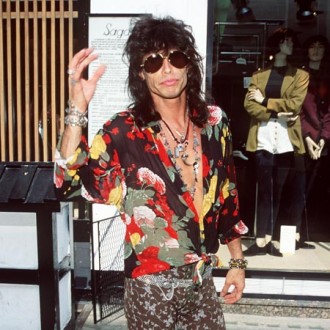 Steven Tyler hopes his autobiography will “jump start” Aerosmith into performing together again.

Although the singer admits he has a complicated relationship with Joe Perry and the other members of Aerosmith including Brad Whitford, Tom Hamilton and Joey Kramer, he still loves working with them and hopes to recapture the enthusiasm they all used to have about recording and playing live.

Explaining the reasons for penning his autobiography, ‘Walk This Way’, he said: “It’s one of the most dysfunctional bands on the planet, yet we’ve kept together. Why? That’s the question – why? – and my book tells it. I wanted the world to know, yes, I fight with Joe Perry, but when we get together in a room we write songs that have greased generations. ‘Walk This Way,’ ‘Sweet Emotion,’ ‘Dream On,’ ‘Jaded’… there’s magic there.

“And I hope the book pushes a few buttons in the band and jump-starts some maybe lying, dormant enthusiasm. The funny thing about the band is when we’re on stage, we’re different animals. We’re right back to the same people we were when we were in the studio writing. It’s like the five right keys that opened the lock of what-it-is-ness.”

The band are currently working on a new album and Steven revealed he is planning to get everyone together at his father’s upcoming 95th birthday to settle their differences and discuss their future.

He told Billboard magazine: “Well, I sent Joe a bunch of songs and he sent me a bunch of licks. We’ve e-mailed back and forth with each other. All I need is a few good licks; that’s the way ‘Walk This Way’ was written, one of Joe Perry’s licks, and I grabbed the ball and ran with it, and that’s all it takes sometimes.

“We’re getting together for my father’s birthday – he’ll be 95 – in May and I’m gonna have a band meeting at which time we’re gonna settle a lot of the tumult that’s been going on in the last year between lawyers and managers… As John Lennon said, time for a new broom to sweep things clean, dahling!”