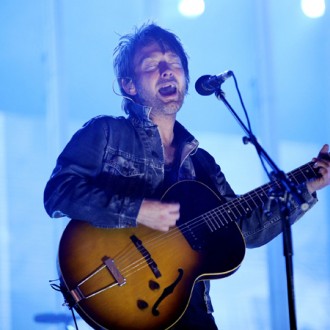 The ‘Reckoner’ group’s frontman, Thom Yorke, played the first verse of ‘The One I Love’ by the US indie group – who announced their split last week – partway through their first set in the US for a number of years.

The show was also only the band’s second full live show since releasing eighth album, ‘The King of Limbs’, in February, the other show being a secret performance at Glastonbury Festival in England in June.

The band’s set, at the Roseland Ballroom, leaned heavily on material from their latest album, opening with ‘Bloom’, followed by ‘Little by Little’, then unreleased track ‘Staircase’.

The band later played ‘Subterranean Homesick Alien’, a surprise track from their 1997 album ‘OK Computer’, ‘Everything in its Right Place’ from their experimental ‘Kid A’ record and obscure album track ‘Myxomatosis’ from ‘Hail to the Thief’.

During the set Thom also made political comment, beginning the track ‘Bodysnatchers’ by seemingly referring to recent police violence toward protestors on Wall Street, saying: “Did you see the film ‘Inside Job’? They’re still here. Still working a few blocks from here.”

The band finished their main set with an extended version of ‘Reckoner’, before returning to the stage twice for encores, playing ‘ Give Up The Ghost’, ‘The National Anthem’ and ‘ Morning Mr. Magpie’ in the first and ‘Street Spirit (Fade Out)’ and ‘Nude’ in the second.

‘The One I Love’/’Everything In Its Right Place’

‘Give Up the Ghost’