PJ Harvey hopes she can return to win the Barclaycard Mercury Prize for a third time in another ten years. 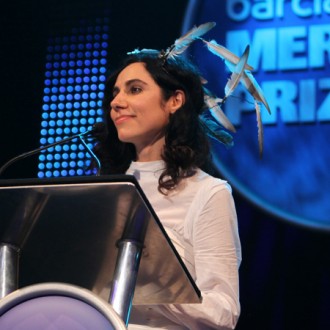 PJ Harvey hopes she can win the Barclaycard Mercury Prize for a third time.

‘The Words That Maketh Murder’ singer became the first artist to take home the award twice – for her eighth album ‘Let England Shake’ – last night (06.09.11) which she said encourages her to continue pushing the boundaries with her records.

Speaking after receiving the prize, she said: “I hope to be back here again in another 10 years time with another record because it’s very important to me to keep making work that is of relevance, not just to myself, but to other people.”

Ahead of the announcement she had won, Polly had supported fellow female singers who were in the running for the award, saying: “I really like Adele’s voice and I find her singing very moving, so I’d be happy if she won.

“Anna Calvi is an artist who will really develop and go on from here.”

Meanwhile, although nominees Tinie Tempah and singer Adele left empty handed, the former said he spoke with the ‘Rolling in the Deep’ singer and is getting closer to convincing her to appear on his second album.

Speaking at the awards, he told Metro newspaper: “It feels great to be in a position where you are up against a major artist that you know and that you get along with.

“[A collaboration] is something I try to make happen every day of the week and if I get her on my second album I will be very happy.”