Nicki Minaj was surprised by how ''involved'' Eminem was with her track 'Roman's Revenge' - which the rap star appears on. 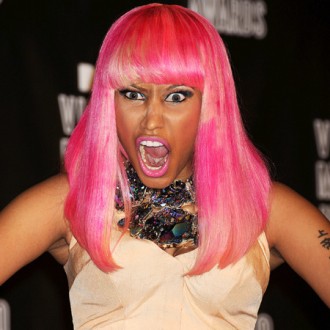 Nicki Minaj was surprised by how “involved” Eminem was with her track ‘Roman’s Revenge’.

The upcoming rap star was hugely surprised Eminem would even talk with her on the phone, let alone collaborate for a track; and that when they did get together and record, he was the most involved of anyone she’s worked with so far.

Young Money star Nicki told Skee TV: “I kept saying, ‘No way would he even speak to me on the phone.’ I still really consider myself an underground rapper and he got on the phone and spoke to me with respect and really spoke to me like I was his peer.

Nicki also said she was worried about hackers leaking the single ahead of time, and that she was desperate for it to come out, so took the decision to post the track on the internet in the US, which some people falsely believed was a leak.

She added: “It didn’t leak, we put that out. It went up on iTunes, Halloween weekend. It’s pretty hard to avoid hackers, and we are always hoping that things don’t leak, but you have to plan for the worst.

“I wanted to put the Eminem record out the second I heard it. Everybody that heard it was like, ‘That needs to come out now.”

Nicki’s debut album, ‘Pink Friday’ will be released on November 22 in the US.