Morrissey cancelled a concert in Helsingborg, Sweden, last night (14.07.11) due to safety concerns because of rain. 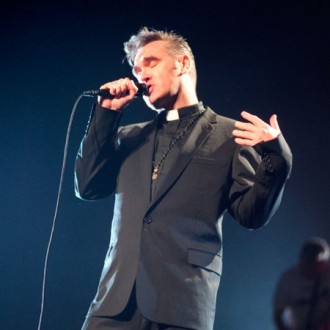 Morrissey refused to perform at a concert in Sweden last night (14.07.11) because it was raining.

The ‘Girlfriend In A Coma’ singer had been booked to play at Helsingborg’s Sundsparlan venue but cancelled just hours before he was due to take the stage.

A statement was later posted on the venue’s website Sundsparlan.se revealed the gig was called off at “the artist’s own request”.

A posting then appeared on fan site True-To-You.net, which the former Smiths frontman regularly contributes to, explaining the concert had been cancelled because of safety concerns relating to the wet weather.

It read: “Due to severe weather conditions the open air concert at Helsingborg (July 14) is unable to take place for reasons of public and artiste safety.”

Meanwhile, Morrissey has revealed he plans to release his autobiography in December 2012.

The 52-year-old believes the time is right to release the book because he views it as a “sentimental climax” to his incredible career which has spanned across four decades.

He said: “I see it (the book) as the sentimental climax to the last 30 years. It will not be published until December 2012, which gives me just enough time to pack all I own in a box and disappear to central Brazil. The innocent are named and the guilty are protected.”