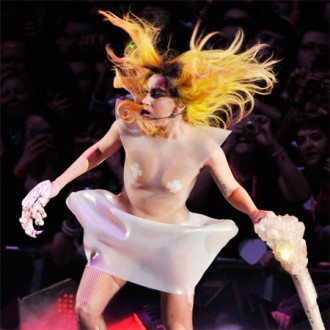 The ‘Judas’ hitmaker will make the one-off, intimate and unscheduled appearance at Annabel’s private member’s club ahead of a full show for the Radio1 Big Weekend festival in Carlisle in the north of the country on Sunday (15.05.11).

While few details of her performance are known, a source told BANG Showbiz: “Gaga loves the atmosphere of smaller venues, and the way she can relax a little more while she’s performing.

“She’s not played so many of the ‘Born This Way’ tracks live, and wants to warm up and do them in front of a small audience before she does the huge show at the weekend.

“She’ll play mainly acoustically and there’s a good chance she’ll be debuting some tracks for the first time ever.”

Meanwhile, Gaga said yesterday(10.05.11) she was overwhelmed by the reaction to her new single ‘The Edge of Glory’ by fans, which was released at the beginning of this week.

She tweeted: “Been crying reading all your beautiful messages for my new song. It means so much to ME (sic).”

Gaga’s secret show has been arranged in connection with Belvedere Vodka, who are offering the chance for one lucky fan to win two tickets plus travel and accommodation to see her perform. The competition is only open for today (11.05.11) and can be entered at the company’s facebook page http://www.facebook.com/BelvedereVodkaUK?sk=app_221721101173741