Josh Homme was astonished at how ''dark2 John Paul Jones was willing to go when they worked on their self-titled Them Crooked Vultures album. 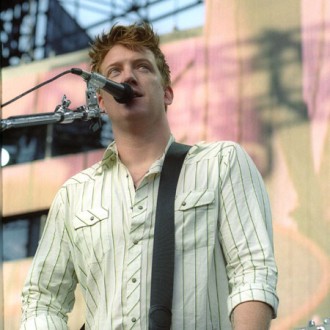 Josh Homme was “scared” of how “dark” John Paul Jones was when they first worked together.

The musicians, along with Foo Fighters frontman Dave Grohl, formed Them Crooked Vultures in 2009 and the Queens of the Stone Age star admits he was initially surprised by the kind of music his new bandmate enjoyed most.

Josh said: “He is one dark character. The darker and more bizarre the music gets, the bigger his smile is. It almost scared me, the first two weeks.

“I kept trying to go darker and darker and his smile was the only light we used at that depth.”

While Josh has huge admiration for the former Led Zeppelin star, he admits he “confuses and annoys” John Paul, though they get along well.

He added in an interview with Q magazine: “Jones is one of my absolute favourite people in the world. Even though I confuse and annoy him, he still stands there looking at me like I’m a little fire, much like Jack Nicholson stared into the fire in ‘The Shining’.”

John Paul recently announced he is writing an opera, and Josh revealed he initially tried to talk him out of the project.

He said: “Jones is writing an opera, which I urged him not to do. That’s too creative. It almost gives me a headache to think of that kind of creativity.”