Gwyneth Paltrow wowed the crowds at the 44th Annual Country Music Awards in Nashville last night (10.11.10) with a performance of the title track from her forthcoming film 'Country Strong'. 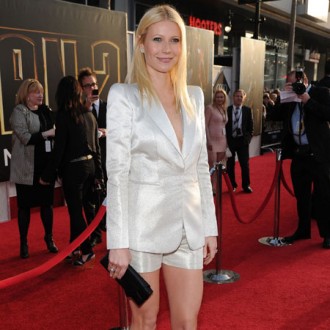 The actress – who is married to Coldplay frontman Chris Martin – sang the title song from her upcoming movie ‘Country Strong’ at the 44th Annual Country Music Awards (CMAs) in Nashville, Tennessee, receiving a standing ovation for her efforts.

Wearing an Atelier Versace gown, Gwyneth – who played the guitar alongside country singer Vince Gill – earlier admitted she had to calm her nerves with alcohol.

She said: “I went to a great bar and I had a pint of Guinness. That’s my new ritual. I’m feeling good!”

During her live performance she smiled at the crowd and closed her eyes, before dissolving into laughter at the end.

Gwyneth was not the only star to perform at the awards last night – Taylor Swift sang ‘Back to December’ while Carrie Underwood played twice.

The former ‘American Idol’ winner – who hosted the event – opened the show with ‘Songs Like This’, backed by her co-host Bob Paisley on guitar and Keith Urban on banjo, and later sang ballad ‘Mama’s Song’.

Both Bob and Keith later returned for their own solo performances.

Miranda Lambert was the big winner of the night, pickling up Best Female Vocalist, Song of the Year and Music Video of the Year for ‘The House that Built Me’, and Best Album for ‘Revolution’, while vocal group Lady Antebellum and singer Blake Shelton picked up two awards.

Taylor, 20, also broke a record to become the youngest person ever to pick up the Country Songwriter of the Year.

Entertainer of the Year: Brad Paisley

Vocal Duo of the Year: Sugarland

Single of the Year: ‘Need You Now’ – Lady Antebellum

Song of the Year: ‘The House that Built Me’ – performed by Miranda Lambert and written by Tom Douglas and Allen Shamblin

Music Video of the Year: ‘The House the Built Me’ – Miranda Lambert, directed by Trey Fanjoy