Get to know Sunflower Bean, the NYC rock band that’s about to become the next big thing

The trio behind "Human Ceremony" talk driving duties, fashion's role in music and never growing up. 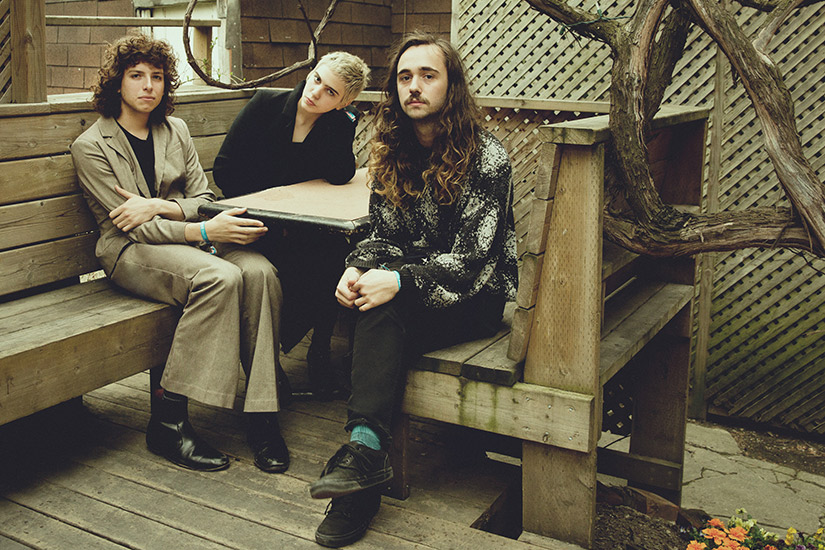 A grey van pulls up outside of the Hard Luck Bar on Dundas Street in Toronto. Its windows are tinted and the exterior is dinged up and scratched. It’s a cliché of the kind of van your parents taught you to steer clear of. But this particular vehicle is different. It’s how Sunflower Bean – the buzzy band made up of three New Yorkers just into their twenties – crosses the continent while performing their debut album Human Ceremony, a dreamy, psych-rock romp trough teenage angst.

After the introductions, I learn that the van is lovingly called “The Boat,” “because it drives like one,” explains Cumming, who then quickly comes clean about not knowing how to drive. Despite the endearing nickname, the thought of being interviewed in “The Boat’s” cramped confines makes the group’s faces go pale, so we walk down to street to Lucky Shrike to sit on the bar’s patio and chat until it’s time for the band to load their gear into the Hard Luck Bar ahead of their midnight show. It’s their third visit to Toronto. After heading westward to tour across the US, the group is off to Europe and then Summer Sonic, Japan’s major music festival outside of Tokyo; Radiohead is set to headline and Sunflower Bean will perform on the same stage as The 1975.

Huddling into a wooden booth on courtyard patio, the trio mull over impending adulthood, personal style and the value of a good breakfast.

Kivlen: “Julia and I are pretty addicted to going to a thrift store in every city. And when you’re on tour for two months that quickly ends up becoming your whole wardrobe.”

Kivlen: “And then I got flared pants! I think we all are just really lucky that we formed this band and no one looks like the odd member out. Sometimes you’ll see a band and three of them will look like they’re wearing costumes and then there’s the one member in a T-shirt.”

Kivlen: “I feel like fashion in itself isn’t a genre of art but a natural by-product of art.”

Kivlen: “You said the same thing about Facebook statuses!”

Faber: “Once you’re in second grade your luck is pretty much over. The first 6 years of your life are bliss.”

ON THE POWER OF MUSIC

Kivlen: “Sometimes I forget that being in a band is actually a worthwhile thing because I’m so bitter. It’s really important to remember [the feeling you get] when you see a band that you love and you realize that it makes people happy. We went to see this band, Sheer Mag, that we really love and the entire time they were playing we all couldn’t stop smiling and to think that maybe you’re doing that for other people, it actually makes your life not seem so selfish.”

Faber: “Because art is very self-indulgent.”

Kivlen: “We call the van Julia’s little spa because she doesn’t drive and she also goes to sleep the second it starts moving. So if we’re driving, Julia is asleep.”

Faber: “I love when people ask ‘what are you guys touring in? Where is your bus?’ Any rock band in America right now is in a van; no one can afford a bus.”