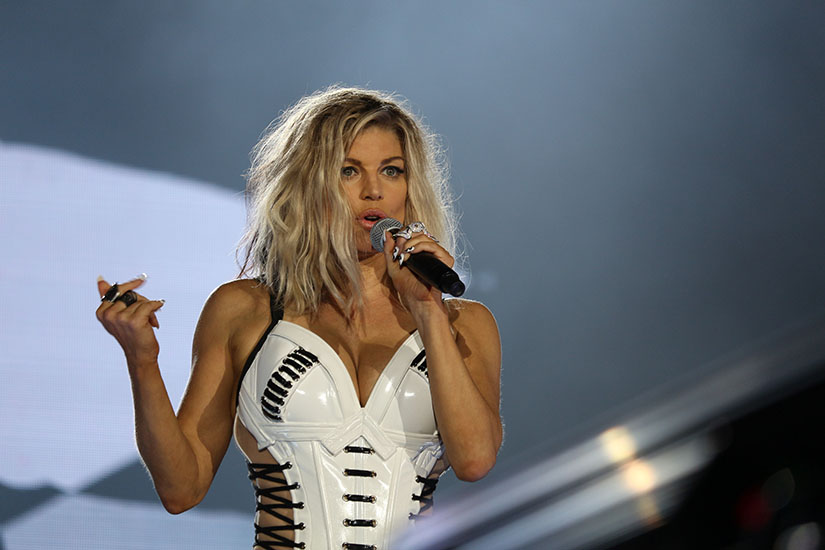 Fun fact: It has been ELEVEN years (almost to the day) since Fergie’s debut solo album, The Dutchess came out. That’s over a decade since the now 42 year old triumphantly left The Black Eyed Peas behind her, set a record for most multi-platinum singles in one album, and made the phrase “lady lumps” a necessary part of all of our vocabularies.

Read on as we chat with Fergie Ferg aka Stacy Ann Ferguson about everything from parenting, learning social media, and how she manages all of her hustles. (Did you know she has a vineyard?!) Oh, and her second album, Double Dutchess, which is finalllllly out now.

No.I was just backed up on emails and it was one of those nights where I start working in my dreams and so I’m like getting things done in my dreams and so I thought you know what? I’m up. then of course [my son] Axl wakes up and we have breakfast together and we watch Jake and the Neverland Pirates and we played hide and go seek 6 times. Then daddy [Josh Duhamel] came home from the gym and daddy’s going to take him to a special daddy date. We have dates with him. It’s fun because he gets his special time. [Ed’s note: This interview took place before the Duhamel’s separated]

I do so many emails, you have no idea! I’m doing my schedule, my son’s schedule, all the school stuff. I’ve got the album, all the videos with the edits, interviews, appointments, family and for doing all the other things, like The Ferguson Crest, our vineyard, handling all of that and my shoe line with Fergie Footwear.

Were you always so on top of admin stuff?

I used to be just touring around the world and I had people just ask me questions when things needed to be handled. I have a lot more responsibility now. For my social networking, for that, I don’t do it all from my phone. I have a guy, Taylor, who helps me and Spencer, and a girl, Jennifer, who helps me with Fergie Footwear and I have to go through all of those for all the different things: the Snapchat, Instagram, Facebook, Twitter, the Tumblr.

Is that a new part of the music business that you’re enjoying? Or does it feel like you just have to do it?

At first it was like this giant ocean that I had no idea how to jump in. It was adding one more thing into my schedule that wasn’t there before, because it does take time. I don’t just want some random stuff thrown out there. I like it to be detailed and I care about it. But I love the benefits of it. I love seeing my fans on there, I love connecting with people and all of that.

Obviously, you have a new album coming out. Can we read anything into the title of the album: Double Dutchess? Other than the obvious that the first one was Duchess and now this is the second so it’s double?

There are songs that are kind of like me as the performer, like M.I.L.F.$, having a laugh—even though there are deeper meanings to M.I.L.F., like “mom I’d like to follow”, as far as being a teacher, a politician, a nurturer, just taking care of your body. There are also songs like “Life Goes On”. That’s the vulnerable side, that other side of me that is completely introspective and sensitive and just very soft. I like to call it a meal—some songs are dessert, some songs are sauce, some songs are more meaty.

Will we learn anything new about you through listening to this?

I don’t really know what people know about me, that’s the funny thing. I don’t know if I have a grasp on what the consensus is.

Do you actually care what that is?

And the greater perception of who “Fergie” is?

I do and I don’t.  I’m hopeful to connect with people for sure, just to get on the same wavelength and vibe with somebody to connect. That would make me happy.

Why did this album take over a decade?

One thing that I have learned in all my years is the only person who can truly make you happy is yourself. I really cared a lot about this album because I knew if I put it out there, and it doesn’t do well and nobody likes it, I can still move on with my life with no regrets. Yes it took a long time, but I’m proud of it. I have a certain peacefulness inside because of that. If I didn’t and I rushed it out just because the demand is there, and just threw a bunch of random stuff together, and then it didn’t work out, I would feel horrible about myself that I didn’t apply myself.