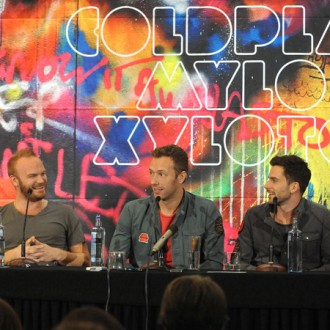 Coldplay joked it was “like playing for their family” at an intimate gig in London last night (06.12.11).

The ‘Paradise’ band played at the 500-capacity Camden Dingwalls venue for the first time since 1998, when they had just released their debut ‘Safety’ EP.

During the set lead singer Chris Martin told the crowd: “This is like playing for our family. It’s so f***ing small. I’ve got more cousins than this!

“We’re used to lasers and posh stuff, and now we’ve got nothing but our instruments and our handsome bass player.”

As the band – completed by Jonny Buckland, Guy Berryman and Will Champion – took to the stage, opening their set with new song ‘Hurts Like Heaven’ from their ‘Mylo Xyloto’ album, things got off to a shaky stage, as the band made a couple of mistakes.

The show saw the band perform against a graffiti inspired backdrop and was attended by lucky fans picked from 60,000 who had applied for the free tickets.