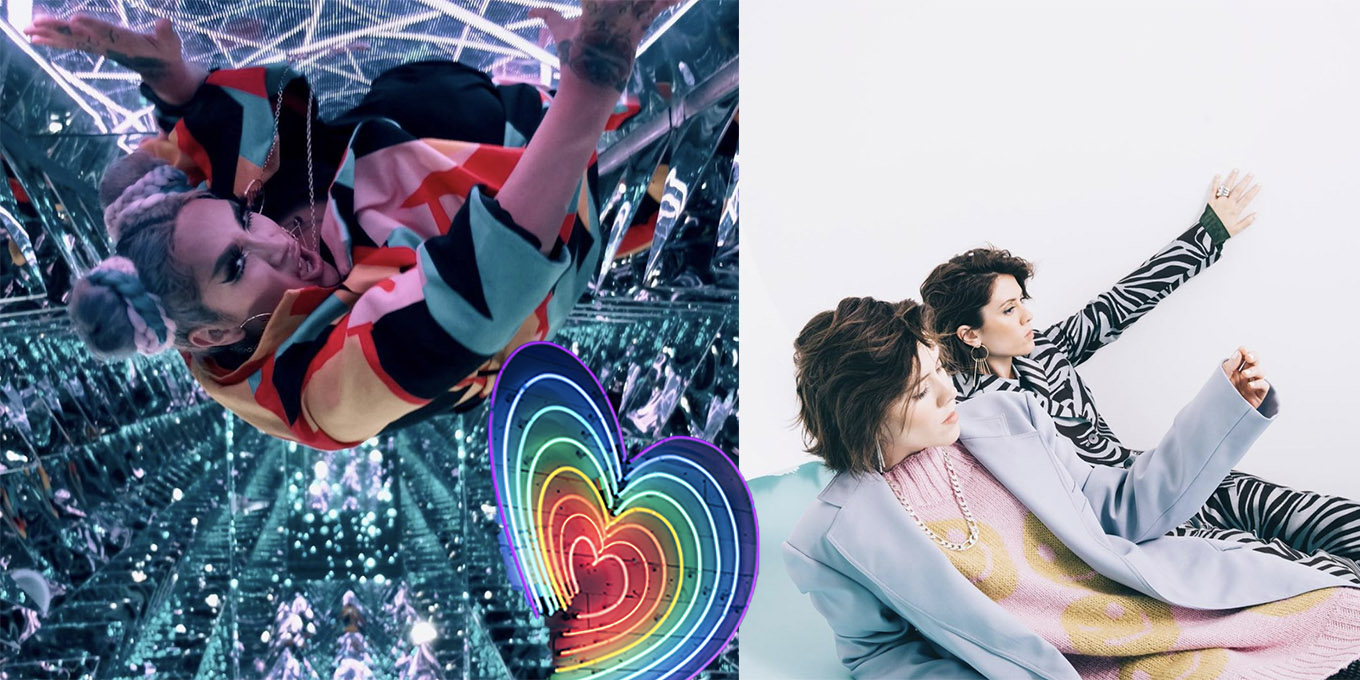 On August 28, 1971, approximately 200 gay and lesbian Canadians marched Ottawa’s Parliament Hill demanding equal rights. We Demand was the first major gay protest in Canada and, as it marks its 50th anniversary this year, it’s a reminder of those still fighting for visibility and representation, as well as the strides taken forward over the past half century.

Music has always been an instrument for resistance, a passage for truth, a manifestation of expression, and an outlet for joy. From the openly queer lyrics of trailblazing pop icon Carole Pope to the subversive punk of The Cliks (known as the first rock band with a transgender frontman, Lucas Silviera) to the innovative electronic soundscapes of Kaytranada, LGBTQIA2S+ artists have forever been at the sonic forefront, shaping the sounds and sights and entire essence of pop culture.

Featuring musicians predominately from Canada’s LGBTQIA2S+ community, this collection of songs celebrates identity, gender, sexuality, and love in all its beautiful and infinite forms.

In an interview with Teen Vogue, Lizzo stated, “I want to love myself, and to truly be in love with yourself is freedom.” “Good as Hell” is a liberating and empowering anthem as celebratory as it is soul-bearing. “I’ve always stood up for the underdog and the underrepresented because I can’t escape from that myself,” she added.

“Save your first and last dance for me / I don’t need a white wedding,” the Quin twins sing over sparkling synth-pop from 2016’s Love You to Death. Tegan and Sara advocated for same sex marriage in the U.S. and Canada, but, Sara told Rolling Stone, she actually actively dislikes the institution. “Now that I’ve fought for the right, and we’ve had success with the Supreme Court, I feel like it’s important for me to be honest, too. There’s strength in saying, ‘I don’t need a piece of paper or a ring or a wedding or photos to show how significant my commitment to a relationship is.’”

“Boys Wanna Be Her” – Peaches

Unapologetically challenging society’s patriarchal views of gender, sex, and feminism while creating genre-less work that defies any mould, Peaches has long been a vital queer force in music. On “Boys Wanna Be Her,” she subverts gender roles over a scorching guitar riff that equally recalls Bikini Kill, AC/DC, and the Runaways. The song has been featured in scores of television spots from The L Word to Fleabag to Full Frontal with Samantha Bee.

“Where Do We Go From Here?” – Quanah Style

It’s impossible not to dance to this euphoric house track from Quanah Style’s eponymous debut, an infectious record nominated for Pop/Alternative/Rock Album of the Year at the Summer Solstice Indigenous Music Awards. The multitalented Two-Spirit Cree recording artist is also a drag performer (featured on CBC’s Canada’s a Drag!) and actress—in 2020, Style delivered a moving turn as Luna in Trans Scripts, a stage play that, assembled from over 75 interviews, tells the stories of seven transgender women in their own words.

A screaming sample of Britney Spears’ “Toxic” pairs perfectly with horrorcore, hip hop, and Backxwash’s explosive flow on this blistering track from BLACK SAILOR MOON, the sophomore EP from the prolific 2020 Polaris Music Prize winner. Backxwash is the first transgender female artist to receive the award, which she won for her exceptional album God Has Nothing To Do With This Leave Him Out Of It.

Queer Filipinx multidisciplinary artist and activist Kimmortal is known for being community-oriented, elevating their peers and confronting social issues through their creatively innovative work. With playful visuals accompanying bright pangs of xylophone, “Sad Femme Club” encapsulates it all beautifully: “Talking class, race, gender, sex, intersections / My feelings are valid and I won’t dismiss ’em….Welcome to the Sad Femme Club / Baby you are enough.”

It’s always ambitious to attempt a signature song from a legendary artist, but TiKA more than steps up to the task. Her rendition of this ‘80s classic from Prince—one of pop music’s most sexually fluid figures—is sensual, immersive, and, with her vulnerable-yet-booming vocals floating over stuttering synths, entirely her own. It’s one of the many highlights from her fantastic debut album, Anywhere But Here, which was released following her coming out as queer.

“I have to exist in a homophobic space in order to make change and that homophobic space would be the hip-hop community,” BROCKHAMPTON founder Kevin Abstract said in an interview with BBC Radio 1. “So me just existing and being myself is making change and making things easier for other young queer kids. I don’t want to be labelled as a queer rapper, I just want to be a rapper, but I want to be me, and express that, and break new ground on the way.“ On “Miserable America,” Abstract exhumes the growing pains of his teens—“My boyfriend saved me / My mother’s homophobic / I’m stuck in the closet / I’m so claustrophobic”—alongside a sparkling, gospel-backed hook where he allows himself to let go.

Rae Spoon is often described as one of Canadian music’s most crucial voices. Along with their perfectly crafted pop songs—like the shimmering “Crash Landing”—they are also a producer, composer, author, label founder (Coax Records), respected mentor, and community builder. No matter what, the polymath’s approach is always rooted in authenticity. “Early on in my life I made choices about, was I going to be out as queer, was I going to be out as trans, was I going to be out as non-binary,” Spoon said to Exclaim!. “I think every time I had to make one of those choices, it didn’t make any sense to me to cultivate this artistic relationship with an audience without just being myself.”

There’s deep intention behind the rainbow tulle that drapes Lido Pimienta on the cover of her critically acclaimed album, Miss Colombia. The Barranquilla-born, Toronto-based artist describes Colombia as a place of both violence and happiness, and finds herself between extremes. “I am the grey area; but very gay, very queer, very feminist, and that’s why I can’t just wear a standard pink Quinceañera dress [for the album cover], it had to be purple, and yellow and green too.” Bridging pop with Afro-Colombian rhythms, Pimienta’s music tackles identity, colonialism, and the racism she’s faced both in Colombia and Canada as an Afro-Indigenous woman. On the triumphantly vibrant “Eso Que Tu Haces” she sings: “Eso que tu haces / No es amor.” The line translates to “That thing you do / Is not love” and calls out government maskings of hate and injustice with grand gestures of love.

This May, Demi Lovato came out as non-binary and changed their pronouns to they/them. Lovato had always been an LGBTQIA2S+ ally, with their 2014 hit “Really Don’t Care” even unexpectedly transforming from bubblegum breakup bop into powerful queer anthem. “When I thought of the lyrics ‘really don’t care’, it made me think of bullying, and made me think of the LGBT community, who deal with that so often, but they accept themselves,” they told Refinery29. Lovato filmed the music video at 2014’s L.A. Pride, where they also served as Grand Marshal.

It’s no coincidence the futuristic funk and effervescent synth lines on this soul-pop anthem from Janelle Monáe’s album, Dirty Computer, directly evoke Prince—the Artist reportedly worked with Monáe on the record before his passing. The stylish-as-hell music video is equally steeped in purple, as well as pink and blue—the colours of the bi-sexual flag—and sees Monáe, who came out as pansexual in 2018, in a nightclub exchanging affections with both a man and actress Tessa Thompson.

SOPHIE was undeniably one of the most singular and creative innovators of modern pop music. Credited with spurring the rise of hyperpop—which employs surreal textures like high-pitch-shifted vocals and abrasive percussion—the producer crafted a forward-thinking, colourful, fluid sonic world that moves from deconstructed sounds to unapologetically sugary hooks. SOPHIE tragically died in an accident in early 2021, but the visionary lives on through an enormously influential legacy and indelible works like “Immaterial,” where, much like SOPHIE, identity is euphorically intangible.

“Queen” was inspired by what Michael Hadreas—Perfume Genius—calls “gay panic.” The lyrics confront homophobia, juxtaposing insults with loving affirmations, and drowning the hate out with ornate psychedelics, booming drums, and a defiantly celebratory spirit. When Hadreas belts, “No family is safe when I sashay,” its affect lingers—not for its sharp sarcasm, but for the deep layers of pain and power at the line’s core.