Carrie Underwood has no idea where she will her six American Country Awards - which are all full sized guitars. 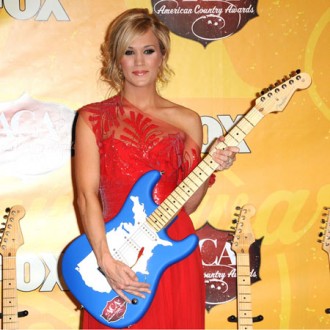 Carrie Underwood has no idea where she will her six American Country Awards.

The ‘Cowboy Casanova’ singer took home full size electric guitar shaped trophies in all the categories she was nominated for at the inaugural ceremony on Monday (06.12.10) – including Artist Of The Year and Album Of The Year – but said she doesn’t know where to keep the oversized accolades.

She told the Wall Street Journal: “I have no idea. I didn’t know they were giving out guitars until I saw the first awards given out. At the end I was like six, what am I going to do with six?”

Carrie also talked about how she drafted three versions of her song ‘There’s A Place For Us’ for the soundtrack of film ‘The Chronicles of Narnia: The Voyage of the Dawn Treader’ to submit to producers for the soundtrack.

She added: “We wrote multiple songs, and it was up to them to choose which one fit the movie the best. We provided three very different songs for them to choose from and they picked an epic ballad, which I do think in the end was a very good choice.”

While the other two tracks weren’t chosen for the film, Carrie said she doesn’t want to see the other two go to waste, and hopes fans will get to hear them one day.

She said: “One of our songs did wind up being on its own more mellow. And the other one we wrote was more radio friendly, definitely more poppy.

“We had a great four-day writing session and came out with three songs where any one of them could have worked. I was so excited to be able to say look how awesome we are-we wrote you three amazing songs. I wouldn’t be surprised if you saw the other two -It would be a shame to waste those.”

Carrie’s album ‘Play On’ is out now.