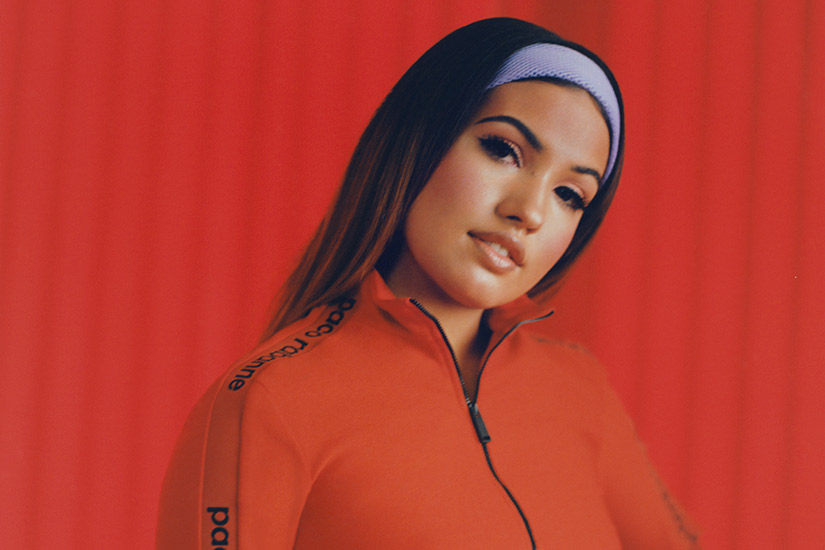 When your parents are industry vets—in the case of Britpop singer-songwriter Mabel, iconic Swedish singer Neneh Cherry and Massive Attack producer Cameron McVey—it’s pretty safe to assume music will play a big part of your life. For the 23-year-old who was raised between Málaga, Spain, Sweden and London, and began writing songs when she was just five, it was inevitable. But when it came time to turn her passion into a career, she was very adamant about one thing: no professional help from her folks (standard parental support still welcome). “I wanted to prove to myself that I had my own talents and was my own artist,” she tells us. “If you work hard and make good music, then nobody really cares who your parents are, hopefully.”

Mission accomplished. After a number of hit singles (including her breakout “Finders Keepers”) and a Brit Award nomination for breakthrough artist, Mabel is gearing up to release her debut LP, High Expectations, this August. We hopped on the phone with the artist to discuss her finding her voice, her songwriting essentials and touring with Harry Styles.

Obviously, you come from a very musical family. Is that where your love for it comes from?

For sure. I was going through a lot of social anxiety from a very young age, so my parents were like, “Hey, you’re one of us. You need to express yourself and create in some sort of way.” Creativity was the therapy they used. I learned how to play the piano and read and write music when I was super young, and the first 12 years of my relationship with music, I was using it as a channel for myself. Then when I was 18, I was like, “I’m going to see if I can make this my profession, because if I can wake up everyday and do what I love, I’m winning.” In 2015, I put a song on SoundCloud and signed a record deal like a month later.

What made you finally upload something online?

I was scared, I was at a point in my life where I wasn’t so sure of myself and I had a lot of doubts. I [was worried] people were going to think I was working with my parents and that I’d never be able to step out of their shadow. But I was like, “Well, if I don’t try, I’ll never know.” Then a DJ from back home heard it and made it her record of the week. It changed a lot for me.

Even with the mindset of making a name for yourself, did you ask your parents for any advice?

The thing that people forget is that they’re just my mom and dad. The advice they’ve given me is the advice any parent would give their child: be happy, make things you feel good about. My dad has always said, “If you’re not writing from the heart, then fame, success, money, none of it, will feel good.” It’s the best advice, to be really unapologetic about the stories I’m telling, because they’re my stories so no one can tell me they’re wrong.

What’s the most important lesson you’ve learned so far?

Always trust your gut. Following what somebody else wants and thinks is just not right. It’s my journey and I have to f**k up sometimes. But at least I can put my hands up and be like, “You know what? I f**ked up. That’s on me, I’ll do better next time.” Then when you make decisions and you succeed, it means so much more.

Was there something specific that happened that made you realize that?

I went through a really tough phase after I signed my record deal where I had a team who had a different vision than the one I had. I was lost and was so scared of letting people down—my team, my label, the group of fans who were listening at the time. And I was like, “They want me to be this person.” I literally woke up one day and was like, “Oh, sh*t. I’m letting myself down.” Then I met my current manager, and she was hearing what I was hearing. She was like, “They’re beautiful songs and I believe in you.” And I sort of started believing in myself as well.

What are some of your songwriting essentials?

My phone, because I have a lot of lyrics on it. If I’m having an argument with somebody and they say something I know I’ll want to put in a song, I grab it to write it down. I always have a Moleskine and, like, 20 different pens in my bag because I like to doodle whilst I’m thinking of lyrics. I’m a constant grazer, so snacks—I love a rice cake and hummus. And then I make sure I’m comfortable. I’m a tracksuit girl in the studio, it’s not about serving a look—not that a tracksuit can’t be a look.

Very true. How else would you describe your style then?

Growing up, I went through a phase of princess dresses, but then I was quite tomboy-ish. I’m still sort of like that. You can be sexy in a tracksuit—being sexy is a feeling, not about what you wear. So I like mixing, like I love a heel with a tracksuit, or a dress with sneakers.

Incredible. He’s an amazing artist. That whole experience taught me so much. It was the first tour I’d been on where I was sleeping on a bus and playing in front of 50,000 people every night. I was incredibly lucky to have that so early on in my career. I gained loads of amazing fans who are incredible and supportive and now come to my own headlining shows, which is so cool.

What can you tease about your debut album ahead of its release?

It’s so exciting. I’m an album person—I’ve always consumed music that way, listening to people’s projects from beginning to end. I took my time with it—I can’t give away anything about it other than that I’ve gained so much confidence from writing it, and that’s what I want to give to people. I want people to feel good about themselves.